A TC Queenie Scores At Pompano

The five-year-old daughter of Triumphant Caviar led every step of her mile. She clocked lively panels of :27.2, :55.4 and 1:24.4 along the way. She utilized a :29.3 final quarter to seal the deal. Shes All In (driven by Rick Plano) finished two and a quarter lengths back in second.

Explosive Jet, with Ricky Macomber Jr. in the bike, was third, a nose further back, while Modern Mercury finished fourth. Second Sister rallied from last half way through the mile to finish fifth while Diamond Dagger, the 3-5 tote-board favourite, never fired and finished sixth. 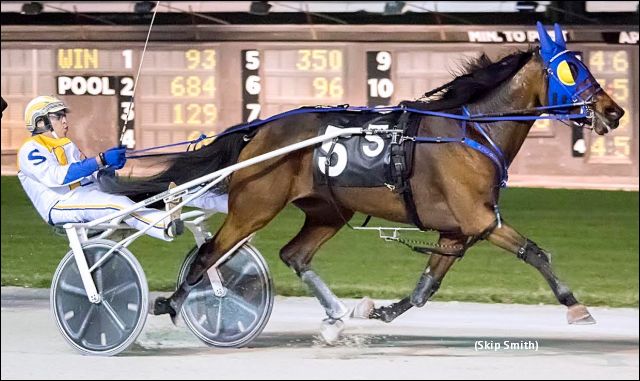 Schaut, who co-owns the mare with sister Trish Soulsby, was humble after the win saying, "’Queenie’ has always been good to us from day one. She's just getting back after a few months off and, each start, she's been getting better. I thought this was the perfect spot to send her from the five post and she came ready to race. She was strong every step and it was a great anniversary present for me and my wife, Liz.

"My sister was here to see it, so it was doubly special for everyone.”

Pompano racing will continue on Saturday night with a Pick-6 carryover of $1,703. The Super Hi-5 carryover has blossomed to $171,941 for the competitive nine-race program.