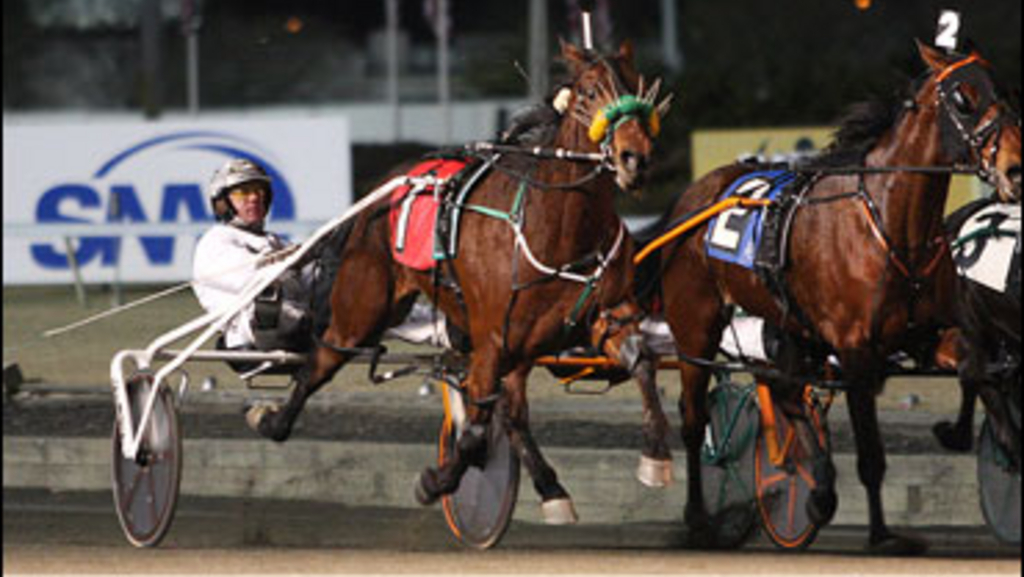 Sears and Native Bride brushed to the top at the half and drew off to a 2-1/2-length victory over Ramona Disomma (George Brennan) to win the featured 10th race for free for all mare pacers. Trained by Lou Pena (four winners on the program) and co-owned by Sears' father, Jay, and T H Stables, Native Bride improved her record to four wins in five starts this season. She boosted her career bankroll to $697,493. Sent off the 4-5 favourite, Native Bride returned a $3.60 win mutuel.

Sears' streak began in the second race with Majestic Jackpot, who turned the tables on his nemesis Real Joke (Andy Miller) in the opening leg of the Exit 16 W Series. Real Joke assumed command in a brisk :55.2 half and maintained a length advantage on Majestic Jackpot entering the stretch. Sears and Majestic Jackpot shook loose late and caught the 1-2 favourite by a neck in 1:50.4, avenging their narrow loss in the Clyde Hirt Final last week. Sent off the 2-1 second choice, Majestic Jackpot paid $6.20 to win. The four-year-old son of Real Artist notched his third win in five starts this season for trainer Brian Burton and his father, Martin, who owns the pacer.

Sears, 42, is gunning for his sixth straight driving title at the Meadowlands. The Secaucus, New Jersey resident was named 2009 Driver of the Year by the U.S. Harness Writers Association for campaigning Muscle Hill into harness racing's record books. Muscle Hill's stunning 1:50.1 victory in the Hambletonian helped propel Sears to a single-day earnings record of $1,555,674 on August 8, 2009. Sears surpassed $100 million in career earnings last year, ranking him eighth on harness racing's all-time list.

There was only one winning favourite in the Friday Pick Six, producing a $96,355 carryover heading into the Saturday night card at Meadowlands Racetrack.

A $1 base wager, the Pick Six is available nightly on races four through nine. A 10-day carryover produced a record $1.3 million pool and $193,384 payoff on April 4, 2009, when five winning tickets took down the pool. The Saturday night Pick Six includes the $40,000 opening leg of the Aquarius Series for four-year-old pacers. Post time for the card is 7 p.m.