Sub-1:50 By General Dolan In Miami

There was plenty of stakes and Open action at Miami Valley Raceway on Saturday (Feb. 29), but its what occurred in an overnight race that had everyone talking once the program was in the books.

An outstanding Saturday (Feb. 29) card at Miami Valley Raceway, featuring total purses in excess of $200,000, included a $25,000 Open I Pace, a $20,000 Open II Pace and three divisions for the opening preliminary of the George Williams Memorial Series. But the biggest surprise came in an $18,000 high condition event when General Dolan shocked everyone with the first sub-1:50 mile before the calendar turns to March in the seven-year history of the five-eighths mile track.

After being nabbed at the wire in the same class last week, driver Sam Widger and General Dolan were on a mission to avoid a repeat occurence. The pair sped to the early lead in :26.3 and never backed off until reaching the wire an open lengths winner in 1:49.3.

It was just the 11th win for General Dolan, a five-year-old son of Rockin Image, and increased his career bankroll to $207,865. Owned and bred by John and Robert Esposito, the quick clocking also lowered the winner’s best-ever clocking of 1:50, taken at Harrah’s Hoosier Park as a three-year-old.

Hallies Comet displayed a late burst to finish second and favoured Granite, who loomed first up on the outside much of the way, held for third.

The featured Open I also produced a surprise result when longshot Big Bad Mike and driver Trevor Smith scored in 1:50.3 at odds of 14-1.

Part of a three-way drag race to the first quarter, Smith ultimately gave way to Shagnwiththedragon as the timer flashed :26. Shortly thereafter Fan Of Terror rushed to challenge the leader through middle fractions of :54.2 and 1:21.4. When the leader finally faltered halfway down the lane, Big Bad Mike found a seam and became part of a cavalry charge to the wire. He collared runner-up Fan Of Terror in the final strides while My Hero Ron closed sharply to grab the show spot. 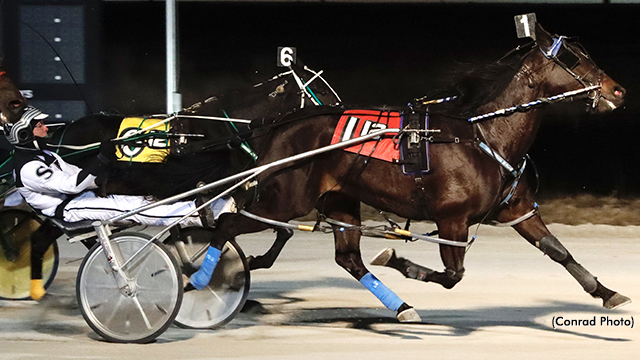 The Open II was not quite as dramatic with heavily-favoured GD Western Joe and driver Chris Page topping Lifewithjohn and Royale Rose in 1:51. No stranger to winning, the Ron Burke trainee now sports 19 wins and $459,121 in earnings. The son of Real Desire watched the first quarter as the leaders put up a pedestrian :28 panel, but rushed to the lead shortly thereafter and avoided any tense moments by tacking middle fractions of :56.2 and 1:23.2 on the board before speeding home in 1:51.