Giesbrecht A Picture Of Consistency 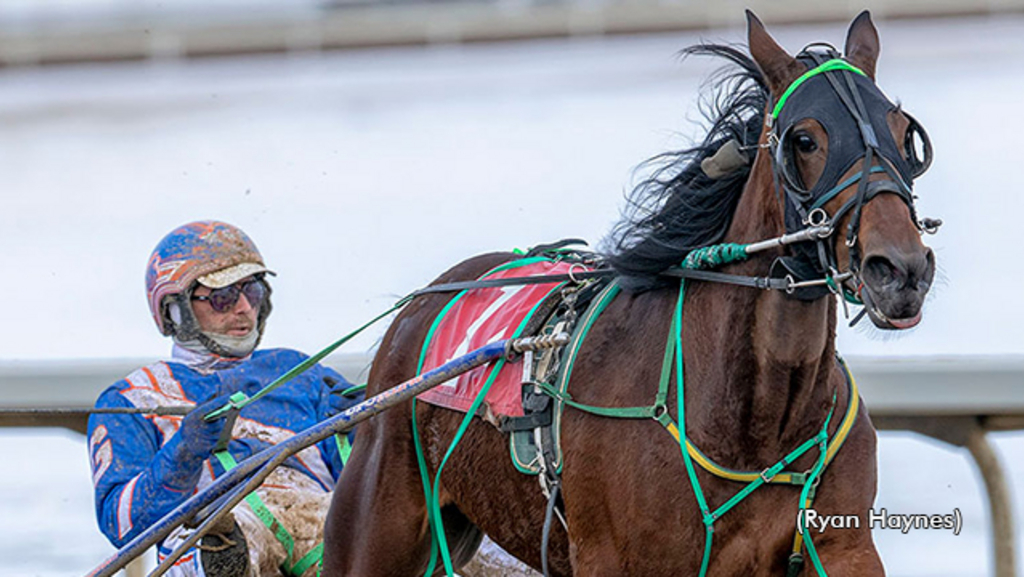 After all, nobody has been hotter or more consistent. Weekend afternoons at Century Mile belong to Giesbrecht the way LeBron James owns NBA MVP awards or Ken Jennings owned Jeopardy.

“I can’t remember a hotter streak,” said Giesbrecht, 33, who has almost always been in the top three at every meet he has contested. “January was a really good month.”

Was it ever. Like grapes or bananas, he’s been winning races in bunches. The harness driver and trainer started 2022 winning five races on Sunday, Jan. 2, took four more the following Sunday (Jan. 9), won five on Jan. 15, one — but with three second-place and three third-place finishes — on Jan. 22, and then another quartet this past Saturday.

All that does is give Giesbrecht 19 wins out of just 61 drives this year. He also has 10 second-place finishes and 11 third-place finishes. For the winter meet, he has 28 wins out of 98 drives — 10 more than Brandon Campbell, who had five wins this past Saturday.

“And that’s just racing one day a week; it’s hard to stay sharp,” said Giesbrecht, who has certainly defied that logic. “Most of the horses I’ve been driving have been live and well-spotted. It also hasn’t hurt driving a lot of Chris Lancaster’s horses,” he said of the meet’s second-leading trainer. “We’ve been rolling along.”

Last Saturday’s winning log, when he drove in all 12 races, looked like this: He won the third race with Ontheroadtotexas ($18.80) after a pocket trip got him a photo finish win over True Crime and Campbell. He won the fourth race wire-to-wire with Pure Addition ($2.60), winning easily by 3-3/4 lengths. He won the sixth easily, too — by 2-3/4 lengths with Dont Rock The Boat ($7.80). Then he turned out the lights and lit up the tote board, taking the 12th and final race with his own mare Gold Onthehorizon ($27.60).

“She qualified really well. It was a little misleading, because the day she qualified, the track was really slow. She came from out of the clouds; she was a long way back,” he said of being in eighth place after a half mile — more than 11 lengths off the pace. But then, she took right off,” he said after winning by more than five lengths. “I think she’s going to be a good little project mare for me.”

Giesbrecht said he probably wouldn’t have won that race if it had been on Northlands Park's old five-eighths-mile oval. “I love the mile track. You’ve got a good shot no matter where you are sitting,” said Giesbrecht, who has been winning races like a sharpshooter in a a carnival arcade game knocking down wooden ducks.

“If I get there, that will be a great milestone.”

Giesbrecht, whose drives have earned just a little short of $6 million to date, has actually been sizzling for the last year and a half.

“It’s been going on just a little longer than since my nine-month old son, Trace, was born. “Before then, I was struggling a bit. Maybe that’s the difference,” he chuckled in a wide-ranging, one-hour interview from his home in Fort Saskatchewan, which is just 15 minutes away from Gerry Hudon’s farm, where he does his training.

“I know, no matter how the day has gone, when I come home, (Trace) puts a big smile on my face. And my wife, Jocelyn, who I’ve known for seven years and been married to for 3-1/2 years, has been a rock,” he said of Hudon’s daughter.

“Meeting her was a big turning point in my life. We make a good team.”

A very personable and nice guy trying to be even nicer, Giesbrecht said, “I want to be professional in every thing I do. I want to be the best person I can be. I’m trying to be an all-around good person to everybody. I try to treat people the way I want to be treated.”

“Two years ago, I wasn’t winning like I should have been. I was not driving with any confidence. It’s like a goaltender in hockey. When you are going good. the puck will hit you and not go in. When you’re in a slump, you can’t stop a beach ball,” said the self-admitted ‘sports fanatic,’ who was a good hockey and baseball player when he was younger.

Now he loves to golf, playing mostly at Smoky Lake, but also liking to get out to Cardiff, Fort-in-View and RedTail Landing. “When I was struggling, I think I was over-driving a bit. “But I definitely can’t complain at all about the last year and a half,” said Giesbrecht, who won last year’s Super Final with Samba Beat last October and the Gord and Illa Rumpel with Burning Hot — two of the biggest races of the year at Calgary’s Century Downs.

Originally from Manitoba — in a little town just an hour south of Winnipeg — Giesbrecht said he took his driver’s test the day after he turned 18.

“I was chomping on the bit; I couldn’t wait,” said Giesbrecht, whose grandfather, Silvio Fillion, who was into harness racing, put him behind his first horse when he was 11 years old.

Giesbrecht said it was his grandfather who also taught him patience.

“He was a calm, cool, collected guy. He taught me to turn the page as fast as you can after a bad day, and that’s what I want to be like. When things don’t go the way you expect, you have to leave it there: at the track. All you can do is hope for some good luck the next time.”

“It’s not going to be ribbons and rainbows every day,” said Giesbrecht, who said that one of the things that makes him a great driver is being able to read how a horse is feeling. Growing up, Giesbrecht said he dreamed of racing at Woodbine in Ontario.

“And I did that,” he said of his journey in the fall of 2009. “People didn’t know who I was. It was pretty intimidating driving against some of the best drivers in the world. It was like going to school again. Or learning how to walk. I watched how they presented themselves. I became a student of the game. I thought I drove pretty well when I was there.”

“I learned from my mistakes. I realized I can’t be perfect all the time, but I want to be. I try and do the best I can for those two minutes for the people that named me on their horses. And I thank them for trusting me. I especially like winning for the smaller guys - guys that are struggling. I love it when I can make their Christmas or make their week.”

Two years later, when he was 20, Giesbrecht came west to Alberta. “I drove my little four-door Sunfire car, lived in the dorms, and thought, ‘This is a great spot.’ It was a good opportunity for me. They were racing four days a week, and I used to study films of Keith Clark’s races,” he said of arguably the best driver in Western Canadian history.

“I just wanted to learn. I picked everyone’s brains, especially Keith and Gerry (Hudon). Gerry has helped me out lots,” he said of a very accomplished horseman who won almost 3,000 races as a driver and trainer. “People wanted guys like Gerry and Keith to drive their horses. That’s what I wanted.”