'David Vs. Goliath' At Pompano 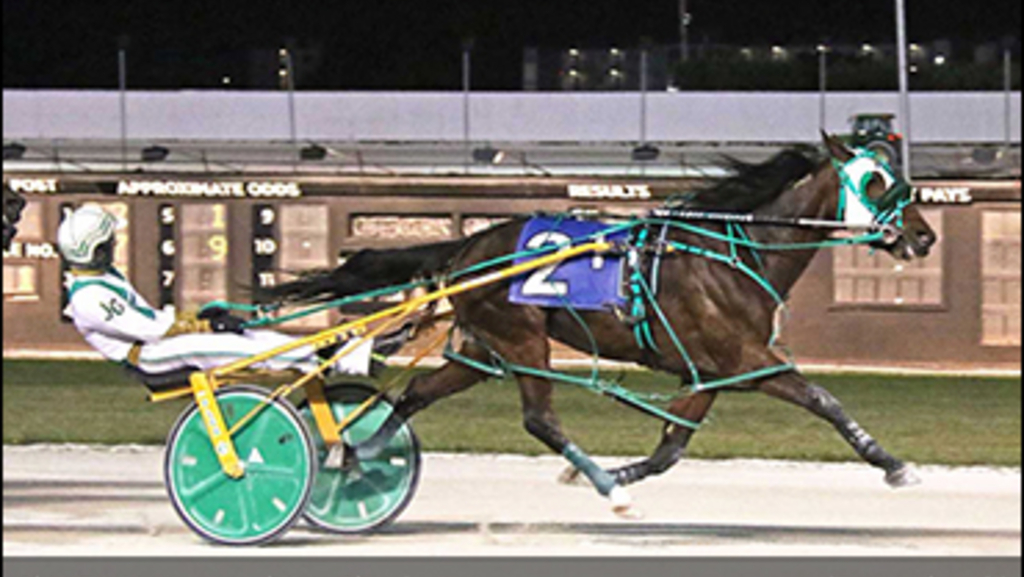 Pompano Park presented its version of the “David vs. Goliath” saga on Monday night (Feb. 1) with the tiniest of pacers with the lowest lifetime earnings, “slowest” lifetime mark and with the driver with the least lifetime wins conquering the best pacers on the grounds in the $11,000 Open I Pace.

Skip To My Lou, a five-year-old gelded son of Sweet Lou standing maybe 14 hands high, proved he has a heart the size of any Goliath with a 1:51.2 win for 21-year-old owner, trainer and driver Joe Chindano Jr., who, with 155 lifetime wins, was competing against four other drivers with over 37,000 combined wins.

Skip To My Lou not only took top honours against the likes of Prairie Panther, Seeing Eye Single, Southwind Amazon and Ideal Feeling, he did so going first-up on the backside as near gale force winds began to pummel the South Florida five-eighths mile oval.

As the wings folded, Southwind Amazon (Tony Hall) left with his usual alacrity and took the field to the opening panel in :26.4 with Seeing Eye Single (David Miller) on the prowl and assuming command three-eighths in and rolling over to the half in :55.2. With Skip To My Lou third at this point, Prairie Panther (Wally Hennessey) was on the move from fourth and forced the hand of Chindano, who tilted Skip To My Lou to thee outside to begin gnawing away first-up.

Turning for home, Skip To My Lou stuck his head in front and began edging away in the final stages, scoring by 1-1/4 lengths.

Said Chindano after the race, “Yes, he’s a tiny horse, but he has a huge heart and powerful lungs and about as game as they come! I was looking for a two-hole trip back of Southwind Amazon, but that sure didn’t materialize and I had to take a chance going first-up on the backside or get shuffled back to a no-win situation. So, I had confidence in ‘Lou’ and he sure didn’t let me down!”

For Skip To My Lou, it was his second win in this top company in three tries and third win of the year, sending his career bankroll to $129,651 — still the lowest in the field where the four other starters had made well over $2.2 million.

In the companion $11,000 Open Handicap Trot, Born To Thrive, handled by Rick Plano, went grinding his way to victory in 1:54.3, equalling his 2021 mark thus far in the young season.

The altered son of Swan For All was last in his talented sextet early, pulled just after the opening panel and gradually gnawed his way to the lead. Once they straightened away for the charge home, Born To Thrive was three lengths clear of the 13-year-old warhorse Cantab Lindy (John MacDonald), with Born To Thrive's stablemate, Sooo Handsome (Dave Ingraham) next. Odds-on favourite Muscles For Life faltered after cutting panels of :27.4, :57.2 and 1:25.2.

Pompano Park recorded the highest single night handle in its 57-year history on Monday night with wagering tallied at $1,436,603. Records were also set for each of the two Pick-4 events, each with a $30,000 guaranteed pool and a 12 per cent takeout —the lowest in the industry. The Late Pick-4 had a pool exceeding $62,000, eclipsing the former record just a few races earlier in the first Pick-4 of the program.

Not only did the handled beat last year's comparable night by over $1 million, it was the eighth night where handle exceeded $1 million that included several "near misses," according to director of racing Gabe Prewitt.

"The racing has been competitive," Prewitt said, "the driving colony here has been strong, and we try and give the players a solid product race after race."

Currently, the track offers nightly guarantees on their Pick-4 events and free programs on their website.

Racing at Pompano continues on Tuesday night (Feb. 2) with a $20,000 guaranteed pool in the Pick-4 which covers races six through nine.

Tags
Born To Thrive
Pompano Park
Skip To My Lou