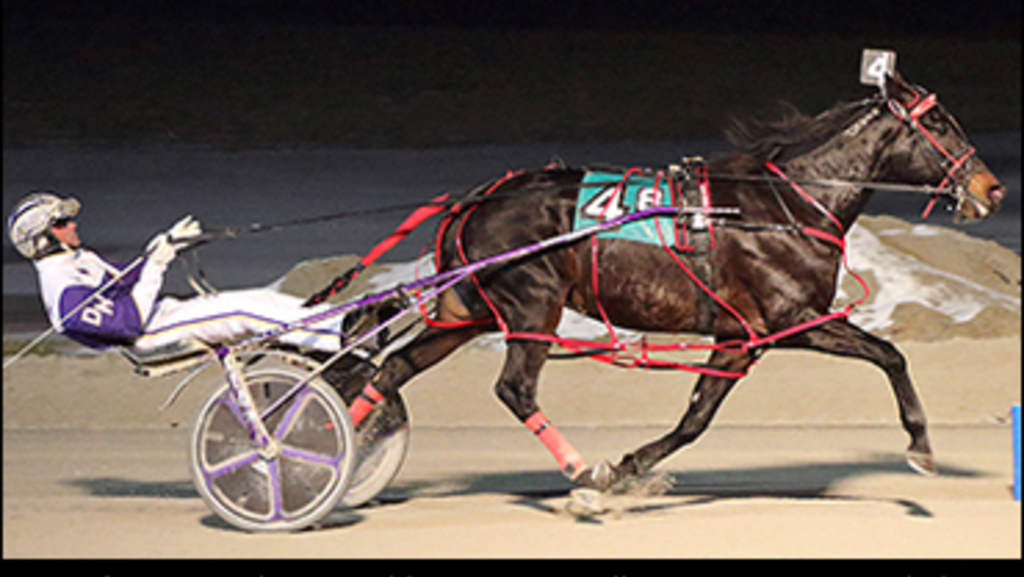 Fan Of Terror is officially the ‘King of the Hill’ among $20,000 claimers at Miami Valley Raceway after capturing the $32,500 Claim To Fame final for that division on Saturday night (Feb. 2).

For trainer Brady Galliers, it was the second lucrative Claim To Fame final in as many weeks, having copped the $12,500 split with RHP. In both cases, Galliers welcomed the winners into his stable just prior to the finals via the claim box.

Galliers wisely chose red-hot Dan Noble to steer Fan Of Terror in the championship tilt. The result was a front-stepping 1:52.3 score for the son of Western Terror’s seventh straight victory in southwest Ohio. The 4-5 favourite beat second choice Latest Desire (Trace Tetrick) and long shot Whiskey Friskie (Tyler Smith). New owners Brian and Ira Wallach recouped the majority of their purchase price for Fan Of Terror in just one week.

Noble was right back in the winner’s circle for the fifth time on the night — and ninth time on the weekend — following the $25,000 Open I Handicap Pace. Nuclear Dragon, making just his third start after a three-month vacation from the racing wars, pushed the starting gate out of the way at the start and pulled Noble around the five-eighths-mile Miami Valley oval on the front end in 1:51.2. The odds-on favourite topped long shots Whatchyastarinat (Kyle Ater) and Shagnwiththedragon (Mike Oosting) in the top weekly feature race. It was Nuclear Dragon’s tenth triumph in the past year and it pushed his earnings over the last 12 months over $200,000 for owner Richard Mishkin.

A $20,000 Open II Pace on the Saturday card wasn’t nearly as chalky. The longest shot in the race, 87-1 Mojoto Hanover (Elliott Deaton), made an ultra-impressive three-wide rally around the final turn and through the lane to score a 1:53.3 tally and return $176.80 to win. Cruise Patrol (Trace Tetrick) also made up a huge deficit to come from last at the half to second at the finish; Whataboy (Tyler Smith) nabbed the show dough. Mojoto Hanover is trained by Zachary Miller for owner Edward Dobrowolski.

Two divisions of the second leg of the $30,000 Claim To Fame Series also went to post to determine the nine finalists for their $37,500 championship final on Feb. 10. Tetrick guided both winners in an identical clocking of 1:53.1. In the first division, Swapportunity bested IYQ YQR (Chris Page) and Evergreen Elite (Kyle Ater). Claimed out of the first leg of the three-week series, Swapportunity was making his initial start for LaSalle Investments LLC and trainer Becky Zubkoff. Cyclone Kiwi N notched his second straight win in the second division, racing for new owner-trainer Adam Short who also plucked the winner from the leg one claim box. Indiana Cam (Todd Warren) raced huge from an outside post for his second consecutive runner-up finish, while Sammy The Bull N (Josh Sutton) proved best of the rest.