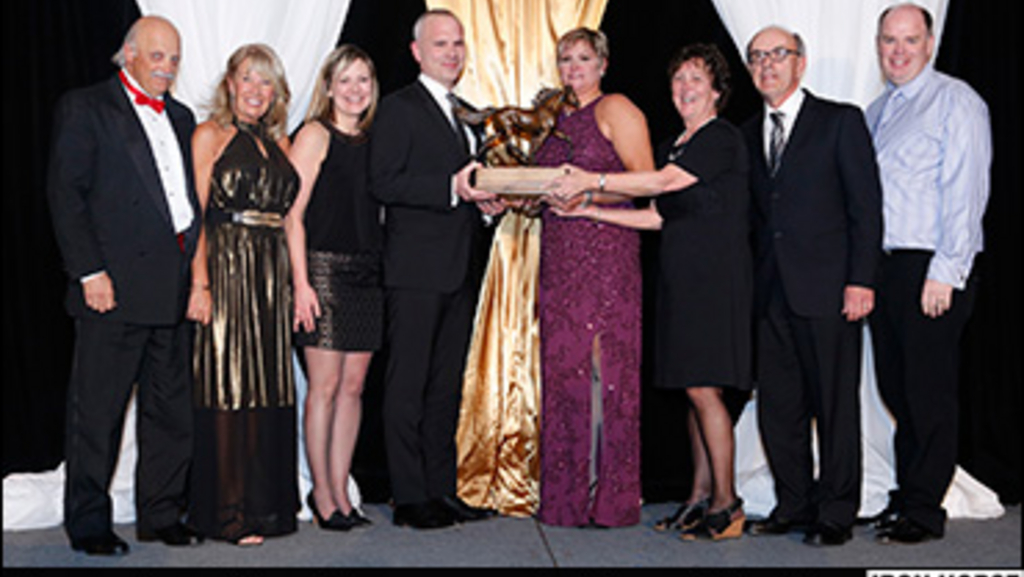 On Saturday, February 13, Standardbred Canada announced harness racing’s national champions at the 2015 O’Brien Awards, which honour Canada’s best in harness racing over the past season.

This was the 27th edition of the O’Brien Awards, named in honour of the late Joe O’Brien, an outstanding horseman and member of the Canadian Horse Racing Hall of Fame. 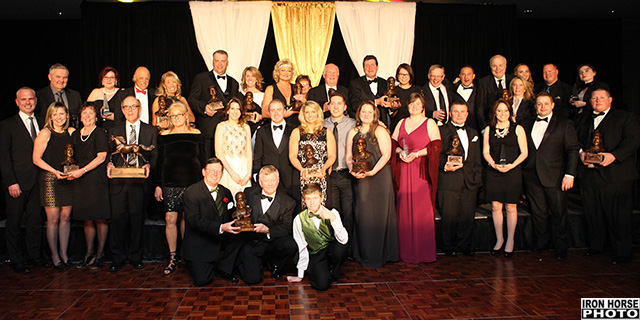 Sylvain Filion, 46, of Milton, Ontario took home his third trophy as Canada’s Driver of the Year. The Quebec native won this award in 2012 and 2013. In 2015 he drove 343 winners and horses to earnings in excess of $6.9 million. On November 16 he recorded another career milestone when he recorded his 8,000th driving victory at Woodbine Racetrack.

Richard Moreau, 51, of Puslinch, Ontario, took home his third consecutive O’Brien bronze as Canada’s Trainer of the Year. Moreau, who has been a regular on the Woodbine Entertainment Group (WEG) circuit for over 11 years, led all Canadian trainers in the wins column, posting 271 victories in 2015 and finished second in the earnings column with his stable earning more than $3.6 million.

Following a career-best season, veteran horseman Dr. Ian Moore, a native of Prince Edward Island, was honoured with the O’Brien Award of Horsemanship. Moore had 62 wins and earnings exceeding $2.1 million in 2015. In addition, his stable star, State Treasurer took Older Pacing Horse honours and was also voted Canada’s Horse of the Year.

State Treasurer scored his richest payday in winning the Canadian Pacing Derby, Canada’s oldest stake event, at Mohawk Racetrack. That was one of nine victories for the six-year-old son of Real Desire who also added more than $986,000 to his bank account. He also posted his third victory in the Molson Pace at The Raceway at Western Fair District.

L A Delight was recognized as the Two-Year-Old Pacing Filly of the Year. The daughter of Bettors Delight was almost flawless last season, winning 11 of 12 starts and $704,000-plus in purses. After a third-place finish in her lifetime debut, she put together an 11-race win streak, knocking off many stakes including a season-ending personal best 1:51.2 effort in the Ontario Sires Stakes Super Final at Woodbine Racetrack.

The Well Said colt Control The Moment dominated the freshman male pacing ranks, winning eight of nine starts, more than $461,000 and was recognized as Canada’s Two-Year-Old Pacing Colt of the Year. The highlight of his year was defeating North America’s best colts when he scored a season’s best 1:49.4 victory in the Metro Pace at Mohawk Racetrack.

Wakizashi Hanover, a winner of 11 races and purses exceeding $1.2 million, was voted Canada’s Three-Year-Old Pacing Colt of the Year. The $23,000 yearling purchase won Canada’s richest harness race, pacing to a three-quarter length career-best 1:48 win in the Pepsi North America Cup at Mohawk Racetrack. It was his richest victory and worth a $500,000 paycheque.

Lady Shadow won her second consecutive O’Brien Award, this time in the Older Pacing Mare division, where she was victorious in five races and picked up $360,000-plus in purse earnings. She scored back-to-back victories in a life’s best 1:48.3 when she swept the elimination and final of the Roses Are Red Stakes at Mohawk Racetrack.

Caprice Hill, voted Two-Year-Old Trotting Filly of the year, was never worse than third in 10 starts in 2015, while scoring seven wins and bankrolling more than $593,000. She put together an impressive five-race win streak that kicked off with an Ontario Sires Stakes Gold event at Georgian Downs in June, and concluded with an OSS Super Final Win in October.

Southwind Frank’s incredible season earned him top honours in the Two-Year- Old Trotting Colt category. He was almost invincible in 2015, winning 11 of 12 races, including a Breeders Crown championship and $941,000 in purse money.

Mission Brief, voted Canada’s Three-Year-Old Trotting Filly of the year, earned more than $1 million and racked up 10 wins including the elimination and final of the Elegantimage.

Pinkman, North America’s richest trotter in 2015, was voted Canada’s Three-Year- Old Trotting Colt of the year after a phenomenal season. The son of Explosive Matter won 11 races and purses exceeding $2 million. He scored his richest payday in winning the $1 million Hambletonian at The Meadowlands in a career best 1:51, a world record for sophomore gelded trotters on a one-mile track.

Bee A Magician, Canada’s Horse of the Year in 2013, added another O’Brien trophy to her war chest, this time in the older trotting mare division. The Kadabra mare had an incredible season winning 10 races, $1.1 million-plus in purse earnings. Her season was highlighted by a spectacular victory in the prestigious Maple Leaf Trot at Mohawk Racetrack.

Older Trotting Horse honours went to Resolve, a winner of four races and $780,000 in purses with one of his most impressive victories coming in the TVG Free for All Trot at The Meadowlands.

In the Armstrong Breeder of the Year category, partners Al Libfeld of Pickering, Ont., and Marvin Katz, of Toronto, Ont., took home their very first O’Brien as breeders. What started as a partnership that focused on buying yearlings and racing horses has evolved into one of harness racing's most respected breeding enterprises for Libfeld and Katz. Horses bred by this partnership won 59 races and $2.2 million last season.

Ron Adams, 28, of Lasalle, Ontario won The Future Star Award. Adams trained 43 winners and horses to more than $950,000 in earnings while racing primarily on the WEG circuit. He also trained Lady Shadow, winner in the Older Pacing Mare division.

Early in the evening, William (Bill) Andrew of Calgary, Alberta, was presented with the prestigious Cam Fella Award in honour of his recent contributions and meritorious service to the Canadian Standardbred Industry. Andrew has been involved in harness racing for nearly four decades and has made tremendous impact on the Canadian Standardbred industry for many years, especially in the provinces of Alberta, and Prince Edward Island where his two breeding operations, Meridian Farms are based. He launched charity stables in Alberta, P.E.I. and Nova Scotia, where the purse earnings from his horses benefitted local charities, and he also donated the money from two yearlings he sold last year to local charities. Andrew has also provided financial support to provincial stakes programs in Nova Scotia and the Matinee Racetrack Development Program in P.E.I.

Cindy Acton, 29, of Woodstock, Ont., was honoured with the Outstanding Groom Award for 2015, which was sponsored by the Ontario Lottery and Gaming Corporation. Acton works for the Ben Wallace Stable.

Owned by David Willmot, King City, ON and Clay Horner, Toronto, ON

Owned by Tom Hill, Hamilton, ON

HORSE OF THE YEAR

Been There, Bought the T-Shirt: The Relevance of Trademark Race Calls