Wynne Sworn In As Ontario Premier 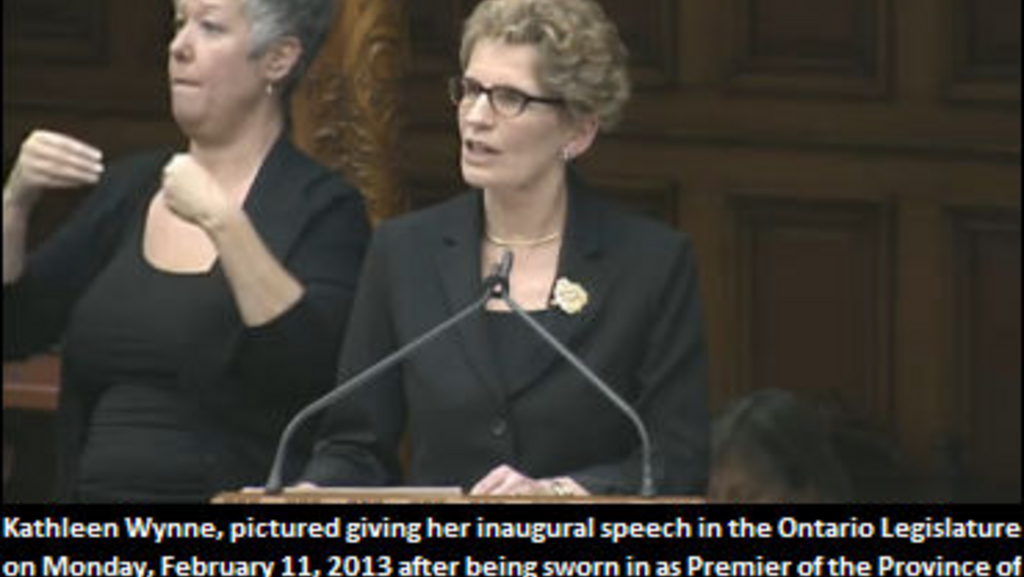 On Monday, February 11, Premier-designate Kathleen Wynne was officially sworn in as Premier of Ontario during a ceremony at the provincial Legislature where she announced her executive council.

Wynne is replacing ex-Ontario Liberal Leader Dalton McGuinty, who on October 15, 2012 announced that he was resigning from the top spot in the minority Ontario Liberal Government.

Ted McMeekin, who had previously held the position of Minister of Agriculture, Food and Rural Affairs for the province, has been shuffled, and is now Ontario's Minister of Community and Social Services. Jeff Leal, who has had a presence in the mainstream media regarding the crisis in the horse-racing industry over the past year, has been named Minister of Rural Affairs. Deb Matthews, who was sworn in as Minister of Health and Long-Term Care, was also named Ontario's Deputy Premier.

"We are here to serve, to listen, and then to lead and act in the best interests of our province --- in the best interests of our hard-working men and women, our proud industries, our strong culture and our beautiful landscape, our children and our grandchildren," Wynne said during her speech, before later adding that "There is so much that can be done if we put the interest of Ontario at the heart of our work."

Wynne said, "We, together, must ensure that our new government works for all and excludes no one, and holds itself to the highest standards of performance and integrity."

Wynne went on to say that she will be "open" as Ontario Premier and that "We must acknowledge our mistakes, take responsibility for them, and work together to guarantee that they are not repeated."

Later in her speech, Wynne stated that a fair society must be created in Ontario "by offering the best jobs, the right opportunities, the most secure footing for the men and women that work so hard for their families and their communities. And we must recognize the needs of those communities, whether they are demographic or geographic, and how we can better serve them to better us all." 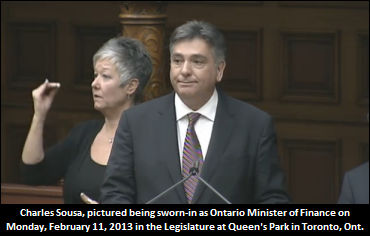 While in the midst of his unsuccessful pursuit to become the leader of the Ontario Liberal Party, Sousa made many comments regarding: the provincial horse racing industry; the horse breeding industry; and the lightning-rod downtown Hamilton casino issue, in terms of possibly pausing the Ontario Lottery and Gaming Corp.'s controversial gaming modernization plan or allowing the casino issue to be decided by the public via referendum.

In December of 2012, Sousa stated that Ontario's horse-racing and breeding industry is "critical to Ontario" and "important," and that the provincial government must "find ways to make it work" and that he is looking forward to doing that.

Right around the new year, Sousa went on the record as saying that he wanted "to promote a successful marketing procedure that can play a role in drawing in more revenue to the province’s horse racing industry, thereby making it more financially sustainable.” Similar to the sentiments that had been clearly stated early in 2012 in the Drummond Report, Sousa, in regard to Ontario's horse-racing industry, stated that it is "important (for the provincial government) to get the best value for money" and that "consultation with industry is crucial."

Late last month, in regard to an expected motion by Hamilton Councillor Sam Merulla to pause the OLG modernization process or bring the Hamilton casino expansion topic to the people via a referendum, Sousa said "let's await local councillors' decision on the motion," adding that "their say on this matter is first and foremost." It has been widely reported for months now that the majority of Hamilton Council supports the idea of expanding gaming at Flamboro Downs instead of erecting a downtown casino complex. "I've always said that our government must to do a better job of listening to local communities," Sousa was quoted as saying. "People deserve to have their concerns addressed before we take action and they expect us to collaborate with them when we do." 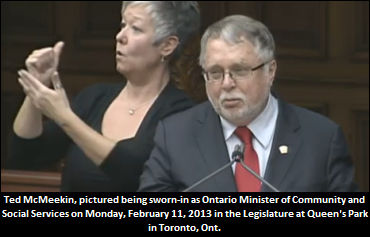 A report by the Hamilton Spectator which was published before Wynne's official swearing-in states that McMeekin will now also assume the position of Chair of Ontario's Management Board.

The Ontario Management Board is a sub-committee consisting of Cabinet Ministers and Parliamentary Assistants. McMeekin was shuffled from OMAFRA after Wynne last week followed through on her promise to serve as McMeekin's replacement on the Agriculture, Food and Rural Affairs portfolio for at least one year upon being sworn in as Premier of Ontario.

Complete reversal of the

Complete reversal of the McGuinty-Duncan OLG situation is the only acceptable solution if Wynne is to stay around as Premier for longer than it takes to call an election. Ontario has to push harder now than ever - remember these are the same MPP's that would not stand up and be counted while the horse industry went up in smoke.

In reply to Well the Liberals keep by howard pearce

The Liberal government has

The Liberal government has done nothing but deceive the standard bred industry for the past year.

How can we be so gullible to expect a change in policy now?
Wynne said she is not going to stop the privatization plan of the OLG.
This plan cannot play out without the dismantling of Ontario harness racing.
She is part of the problem, not the solution.

Go to her office every day and demand an election.
Force her to let democracy live and the voice of the people to be heard.

Well the Liberals keep flashing us little white lights at the end of a very dark tunnel.I was hoping that Charles Sousa would become Minister of Finance and that Ms Wynne would keep her promise to be Minister of Argiculture.Let's just hope and pray the they together can put some brakes on the Godfrey runaway train.