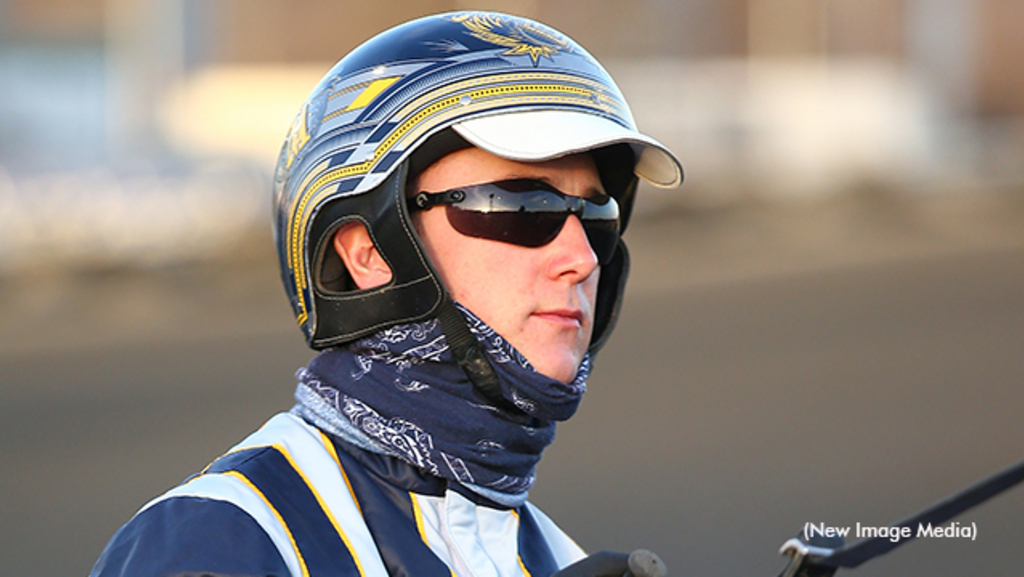 Canadian connections clicked in Monday’s $14,200 Open Trot at Pompano Park thanks to an impressive-looking, come from behind tally by Four Wheelin.

Sent off at odds of 10-1, Four Wheelin got away sixth for driver Bob McClure while Wild And Crazy Guy (:27.2) and Timon AS (:56.4 and 1:26.1) took turns on the lead in the featured affair.  Four Wheelin tipped to the outside in the backstretch and marched his way into contention in the late stages of the contest.

A final quarter clocked in :29 was enough to earn Four Wheelin the half-length triumph over Timon AS in 1:55.4.  Sooo Handsome came on strong to grab the show dough in the seven-horse affair.

Owned and trained by Marcel Barrieau of Cambridge, Ont., the four-year-old son of Wheeling N Dealin-Under The Pines won for the first time in four starts this season.  The 10-time winner pushed his lifetime earnings over $170,000 with the win.

The six-year-old altered son of Chapter Seven led every stride of his mile, just holding off the favoured Keystone Apache (David Miller) by a nose. Just Maybe The One (Kevin Wallis) finished third after being prominent in the garden spot much of the way. For A Dreamer and Cash Hit picked up the final two awards in the field of eight.

Owned and trained by Susanne Lopez, Star Track Hanover earned his second win of the year -- 12th lifetime -- to send his bounty over the $100,000 plateau career-wise.

With the FADC only hosting three or four events weekly, Cromer won a Sunday trot with his newly acquired Muay Hanover in 1:59.4 giving him his 500th career driving victory. Cromer drove his first winner in the mid-1970s and has only sparingly appeared in the sulky since 1997. It was his first win since 2019 and only his second since 2010 with but a handful of drives.

It took a couple of weeks to do it, but driver Gary Barbere got a driving triple with his own P L Jerico, trained by 86-year-old Odell Thompson.

This nine-year-old altered son of Manofmanymissions won on Sunday in 1:58.1, wiring his foes in the process. Not only was this his third straight win for Barbere, it was a 25th lifetime win for P L Jerico with his previous wins being on January 23 in 1:58.3 and January 16 in 1:57. P L Jerico paid $4.20 to his multitude of faithful.

On Monday night, Brian Calvert was back in the winner's circle with Ricky Be Sharp, trained by Donna Riedel for owner Johanna Calvert.

The six-year-old gelded son of American Native, who won for Calvert on January 23, made it two in a row as January closed the books with a 1:57.4 mark, rallying from fifth turning for home to score by a neck. It was the second win of the year for Ricky Be Sharp, who has won an amazing 35 times in his career measuring 79 starts.

Ricky Be Sharp paid $16.20 to win as fourth choice in the betting.

Of course, the real winners in these FADC events are the many charities that benefit from the drivers donating 100 per cent of their earnings while driving in these races, including the Make-A-Wish Foundation, New Vocations, Bit By Bit and others benefiting horse adoption agencies and the welfare of the young.

Thus far, they have donated over $220,000 since their inception.