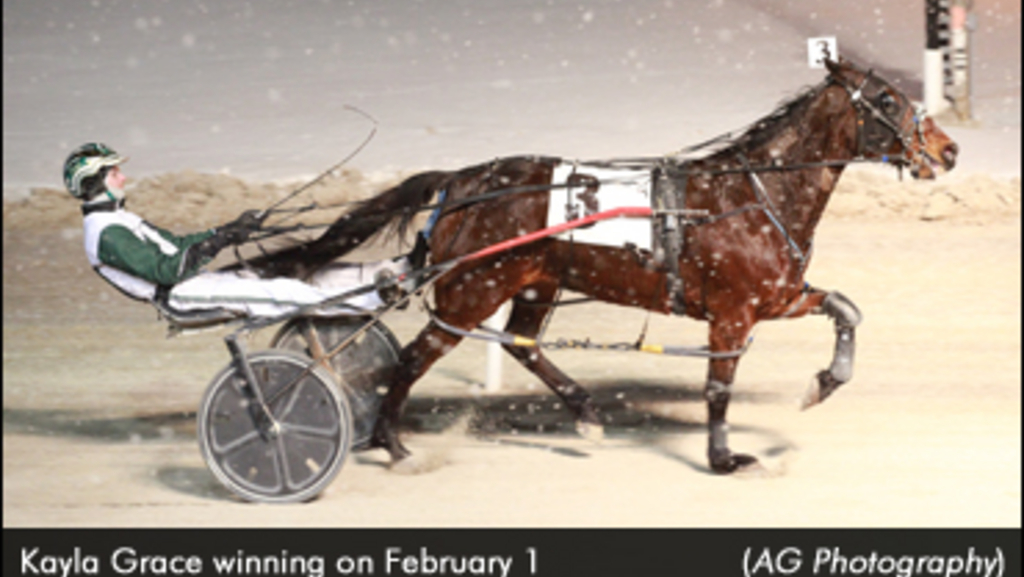 Kayla Grace shipped in to win at The Raceway at Western Fair District, scoring in wire-to-wire fashion in the $7,500 Fillies & Mares Preferred 3 Pace featured on Wednesday evening (February 1).

Leaving from post two in a field of six with two scratches, Kayla Grace had rivals stacked three-high heading into the first turn as she gunned out for the lead. The field settled in line behind Kayla Grace during the :27.3 opening quarter, with 9-5 favourite Zip Car following in the pocket (Scott Coulter). Delta Grace Tone (Robert Shepherd) went first-up approaching the :59.2 half and continued to pursue Kayla Grace to three-quarters in 1:28.4, however, Kayla Grace extended her lead to nearly two lengths down the stretch to earn her first win of the year in 1:59 flat amidst light snow flurries.

Zip Car edged out Delta Grace Tone and Solid Queen (Travis Henry), closing from last, in a three-across battle for the runner-up honours.

Kayla Grace, who paid $6.30 to win as the 2-1 second wagering choice, now sports a three-for-four career record in competition over the London, Ont. oval. She last raced at The Raceway in 2015, more recently competing at Northville Downs, Northfield Park and on the WEG Circuit.

The same connections scored back-to-back on Wednesday's card as the four-year-old Big Jim mare Queenofhearts ($3.50) made her London debut a winning one in the next race for claiming-conditioned mares with a 2:01.1 mile.