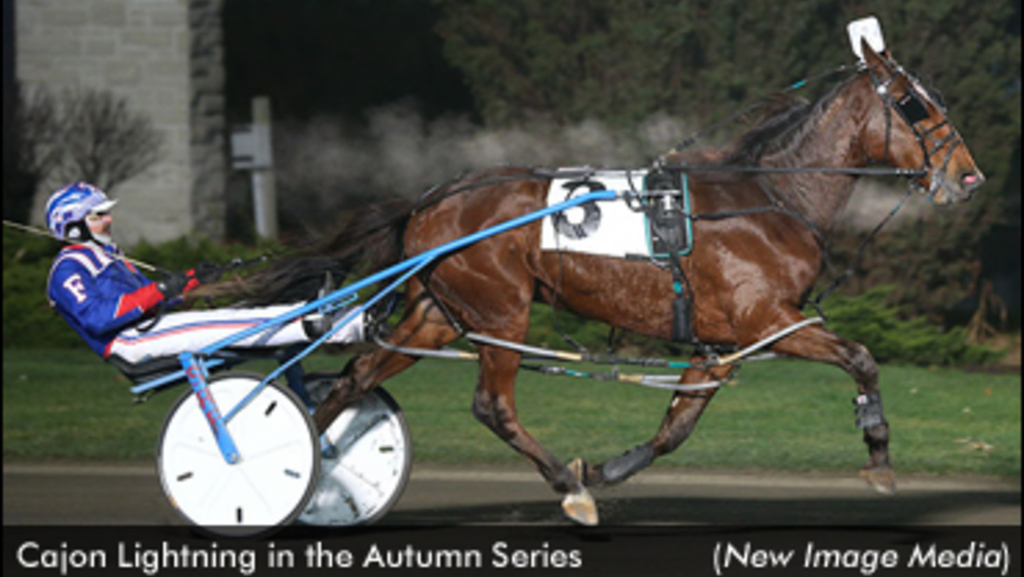 The favourites came out on top in a pair of Autumn Series finals on Saturday night (Dec. 5) at Woodbine Racetrack while driver Sylvain Filion and trainer Richard Moreau continued to rack up wins.

The three-week Autumn Series for three-year-old colts and geldings wrapped up with a pair of $38,000 finals.

Cajon Lightning completed the series sweep with an easy-looking 1:51.3 victory in the pacing final.

The Richard Moreau trainee got situated fifth in the early stages with driver Sylvain Filion, while stablemate Doctor Royal led the field by the opening panel in :26.2. Mach On The Beach, also a Moreau trainee, made a second quarter brush to the lead from fourth, which allowed Filion to follow and touch down on the front with Cajon Lightning at the half in :55.1. Cajon Lightning opened up several lengths on the field around the final turn and cruised by the three-quarter pole in 1:23. In the stretch, Cajon Lightning coasted home in :28.3 under no urging from Filion to win by two and a half lengths. Naturescape finished up well for second, while Mach On The Beach was third.

A son of Mach Three, Cajon Lightning was sent off as the 1-5 favourite after scoring a pair of impressive victories in the preliminary legs. Unraced as a two-year-old, the sophomore pacer has now won five of 18 starts this season for earnings of over $76,000. Cajon Lightning is owned by Wm Wood, William Dittmar Jr., Stephen Iaquinta and Minisink Farms LLC.

For the second Saturday in a row, Filion and Moreau dominated at Woodbine. Again, Filion drove a total of six winners on the 11-race card, five of which were trained by Moreau.

My My Hey Hey turned in a spectacular performance to win the $38,000 Autumn Series trot final.

A trio of scratches left just a field of seven for the series finale. My My Hey Hey, who won a second leg division, was sent off as the 4-5 choice from the rail.

Driven by Mario Baillargeon, My My Hey Hey had a rocky beginning and got away last, while P L Icabod cut an opening quarter of :26.4. Baillargeon was not content to sit at the back with the Ben Wallace trainee and made a bold last-to-first move in the second quarter to take command. After reaching the half in :56.3, My My Hey Hey continued to power along on the front and opened a lead of close to seven lengths to trot by the three-quarter pole in 1:25. In the stretch, My My Hey Hey kept the momentum going and trotted home comfortably in :29.3 to win by five lengths in a series record clocking of 1:54.3. Stormont Wizard, the second choice at 9-5, trotted up to finish second, while Love Hunter was third.

A son of Deweycheatumnhowe, My My Hey Hey has now won four of 13 starts this season for owners Wallacestandardbreds Inc. and Birnam Wood Farms. The sophomore trotter has earned over $54,000 in his first season of racing.

My My Hey Hey’s clocking of 1:54.3 knocked three-fifths of a second off his previous career mark set last week.

In regular racing action, Thunder Steeler was a late-closing upset winner in this week's $34,000 Preferred Pace. Doug McNair engineered the winning trip aboard the 25-1 longshot, who collared Prescotts Hope at the wire in 1:50.1 for the Waxman brothers -- trainer Isaac and owner Aaron.

Prescotts Hope had cleared early speedster Evenin Of Pleasure after opening panels of :25.3 and :53.4 and then raced past three-quarters in 1:22 with a two-length lead. However, Thunder Steeler, second-from-last most of the mile, shook loose with the outer flow fading as they turned for home and reeled in Prescotts Hope down the stretch. Rise Up Now closed off cover for third.

The six-year-old Lis Mara gelding notched his eighth win in 31 starts this year and pushed his seasonal earnings to $142,000.

Thunder Steeler returned $57.30 to his backers at the betting windows.