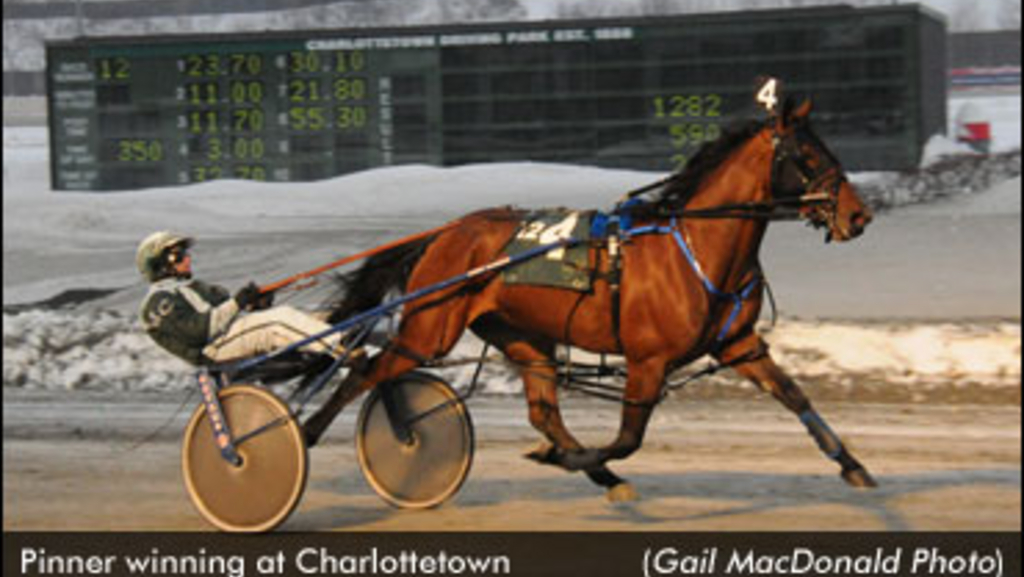 Pinner went wire-to-wire to earn his fifth consecutive victory in the top class at Charlottetown Driving Park on Saturday afternoon.

Marc Campbell sent the 1-2 favourite to the lead from post four in the $2,200 pace and never looked back, carving out fractions of :29.1, :59 and 1:28.2 en route to the 1:57.3 three length triumph over the 'good' track. Nobestbfor and Walter Cheverie overtook pocket-sitter Doll R General and Mark McKinnon for the runner-up honours.

Pinner ($3) earned his 10th win of the year from 39 starts for local trainer Brian Ladner and co-owners Kevin and Lillian Ladner.

The seven-year-old Mach Three gelding has now won 31 races lifetime and is just shy of the $200,000 earnings mark. He will look to extend his current win streak to six during the Boxing Day card on Thursday, Dec. 26, which begins at 1 p.m.

While one streak continued in the feature pace, another came to an end in the top trotting class. This week's $1,500 Open Trot was won by Wendell MacDonald's Caliban Hanover ($7.70) and trainer/driver Ronnie Gass, halting Zip The Lip's streak at four victories.

Caliban Hanover inherited the lead when Abundaspin, driven by Harold Shepherd, broke stride during the :31-second opening quarter. The eight-year-old Andover Hall gelding then led the five-horse field through middle splits of 1:03 and 1:34.3 before holding off the recovering Abundaspin by a nose for the 2:04.4 score. Driven by Brian MacPhee, favourite Zip The Lip made an early break, but quickly reset and followed the winner from the pocket to finish two and a half lengths behind in third.

The win was Caliban Hanover's fifth of the season from 28 starts and 37th lifetime, bumping his bankroll to $80,756.