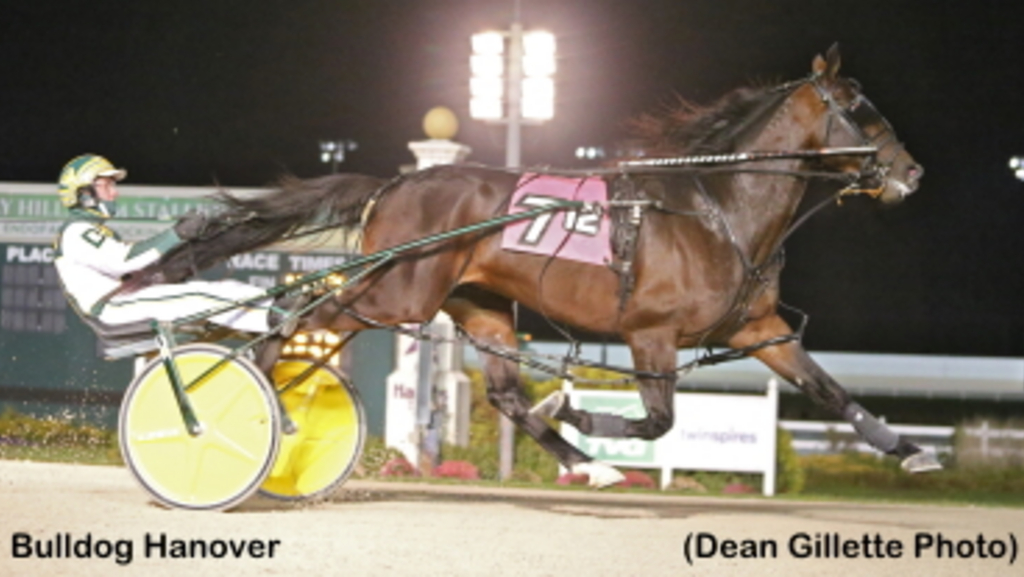 A parade of stars was on display Friday (Nov. 5) at Hoosier Park as the oval hosted a quartet of rich stake events.

Bulldog Hanover captured the richest race of the evening – the $220,000 Monument Circle – in a stakes record-equalling clocking of 1:48.3.

Longshot Gamblin Mo stormed to the top from Post 1 and sliced out panels of :26.2, :53.4 and 1:21. Bulldog Hanover got away fourth, and wound up catching second over cover in the final half of the contest for driver John DeLong. Heart Of Chewbacca was first over before tiring, and that’s when DeLong wheeled Bulldog Hanover off cover in the lane. Despite drifting to the far outside of the track, Bulldog Hanover kept stepping forward and eventually drew clear to win handily over Gamblin Mo and Whichwaytothebeach.

“He can be a little bit of a handful,” DeLong noted. “The trip worked out a lot better than I thought it was going to. He was running out in the stretch but we were pacing so fast, I didn’t want to get in his way. He’s a very fast horse and that was a good win for him tonight.”

Trainer Jack Darling co-owns the son of Shadow Play-BJs Squall through his Jack Darling Stables Ltd with Brad Grant of Milton, Ont. The pacer, who went 4-for-6 as a freshman, now owns an impressive 8-2-1 record this season from 13 opportunities. The $110,000 payday brings his lifetime earnings to $873,561.

Three-year-old trotters battled in the $165,000 Carl Erskine, and race favourite Swingforthefences extended his winning streak to five in a row thanks to his front-stepping triumph in 1:53.3. 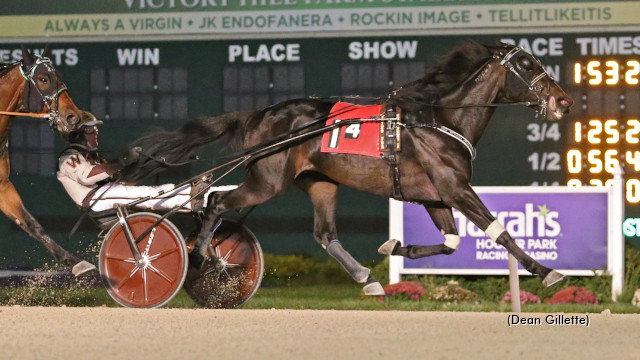 Peter Wrenn hustled Swingforthefences to the lead from Post 1 and together they led the group through fractions of :28, :56.4 and 1:25.2. The gelding kicked home in :28.1 to win over Platinum AS and Seven Nation Army.

“He’s just been so consistent all season long,” Wrenn noted in the winner’s circle. “We’ve been fortunate and he has stayed healthy and sound all year for us and he really has just gotten stronger as the season has gone on.”

Melanie Wrenn trains the gelded son of Swan For All-Sunday Yankee for David McDuffee and L And L Devisser LLC. The victory was his 10th of the season from just 17 attempts. The 13-time winner upped his lifetime earnings to $565,890.

Peter Wrenn also piloted Pub Crawl to a 6-1 upset score in the $105,000 Crossroads Of America for three-year-old filly trotters. 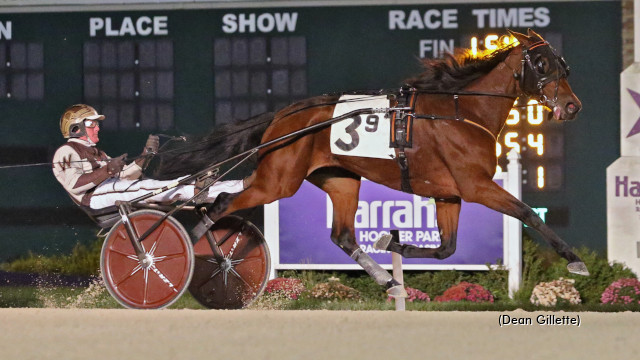 The daughter of Bar Hopping-Myth split horses early in a three-wide battle to the quarter pole in :27.1, and once she cleared she eventually gave way to Katies Lucky Day. Race favourite Empressive Hill rocketed out of fourth in the backstretch and brushed to the front before hitting the half in :55.4 and the three-quarter pole in 1:25. She opened up a comfortable lead coming off the turn before her strides really started to shorten in mid-stretch.

That left the door wide open – and the rail wide open, as well – for Wrenn to shoot through with Pub Crawl. She blasted through the opening and went on to halt the teletimer in 1:54. Material Girl was next best, with Queen Of All nabbing the show dough.

Julie Miller trains Pub Crawl for Marvin And Lynn Katz, Al Libfeld and Sam Goldband. She now owns a 6-1-3 record from 18 starts in 2021 and her earnings climbed to $453,295 with the victory.

Blue Diamond Eyes was treated to a second over trip by Yannick Gingras in the $120,000 USS Indianapolis Memorial, and the filly didn’t let it go to waste. 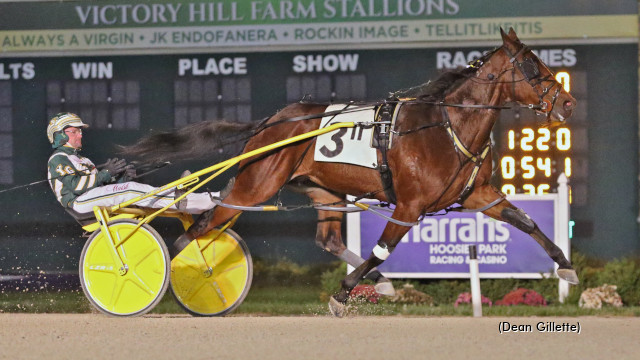 Ron Burke trains the daughter of Captaintreacherous-Aria Hanover for Thomas and Scott Dillon of Anson, ME. The victory improved her 2021 record to 6-3-5 from 18 starts and the lion’s share of the purse bumped her overall bankroll to $1,118,464.

“She’s a super nice filly who has been racing tough all year,” Gingras said of his mount. “I thought she raced really well last week and knew she would be good if we could get a few things to go our way tonight. We were able to get a second-over trip she showed up tonight.”

(with quotes from Hoosier)