Check Me Out Smashes World Record 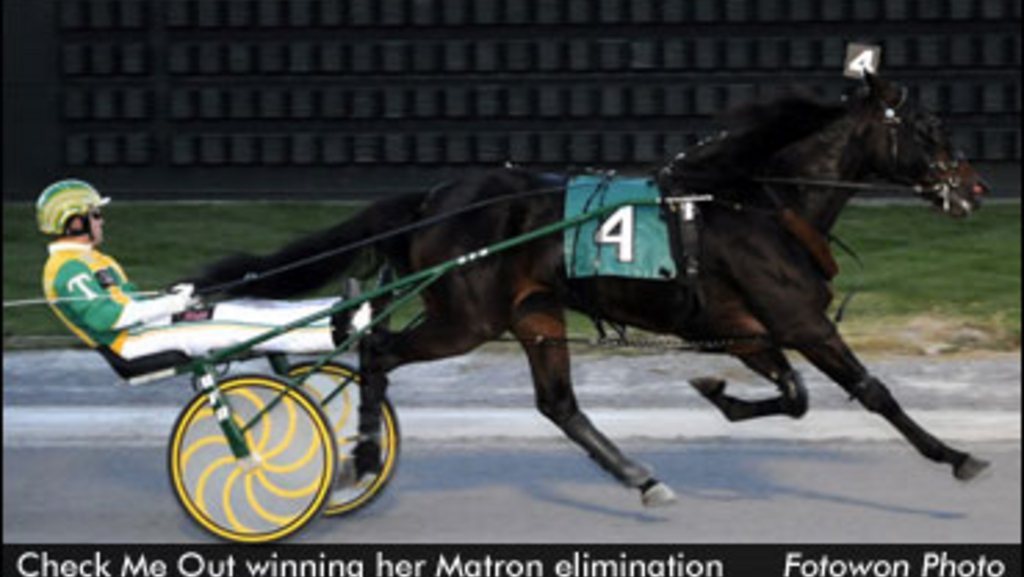 Check Me Out opened up the 2011 Matron Stakes with a 1:53.2 world record, winning the $18,175 two-year-old filly trot elimination at Dover Downs

. Delano made it a Ray Schnittker-trained and co-owned daily double with a 1:57 win in the following $38,725 colt trot elim. Voluptuous Ronda notched the other $18,175 filly trot elim in 1:58.4 while Destinys Chance took the $42,200 filly pace elim in 1:52.4 and Hurrikane Kingcole completed the action with a 1:51.2 victory in the colt pace elim on the Saturday, November 5 card. Tim Tetrick (with three wins) and David Miller (with two) won all five eliminations.

Thirteen was not an unlucky number for Check Me Out. The Donato Hanover-Illusion Bi offspring destroyed the track and world record as Tim Tetrick piloted the freshman to her 13th win in 15 career appearances. The 1:53.2 clocking broke the former track record of 1:55 set in the 2008 Matron by Honorable Daughter (John Campbell). The 1:54.3 world record was previously held by Sand Violet Blu. Blue Muscles (Mike Lachance) was a far back second. She Wears It Well (Jim Rattray) finished third.

Breeders Crown champion Check Me Out was a supplemental entry for owners Ray Schnittker and Charles Iannazzo.

Tetrick also drove the other $18,175 trotting filly division winner, Ron Barnhard and trainer Tommy Haughton’s Voluptuous Ronda to a 1:58.4 score, winning by a nose. It was the third win of the season for the Broadway Hall-Hawaiian Delight bay. Paris Kentucky (Ross Wolfenden) was second in the photo. Masters Voice (Mike Lachance) picked up third money.

Patience paid off for Ray Schnittker in the $38,725 frosh colt elim. After getting off near the back of the seven-horse field, Schnittker moved Delano up along the pylons as colts moved to the outside into contender roles, and then came to the outside on the final turn and out-sprinted Gym Tan Laundry (Jim Rattray) to the wire in 1:57. Pekoe Fashion (Tim Tetrick) took show honours. The wins was the sixth of the season for the son of Credit Winner-Kelly Hall owned by Schnittker, Gareth Dowse, Tom Vassiliou and Nick Tallarico.

Hurrikane Kingcole notched an impressive 1:51.2 triumph in the $52,425 colt pace elim, his fifth on the campaign. The third-place finisher last Saturday in the Breeders Crown received a confident drive from David Miller holding off Heston Blue Chip (Tim Tetrick) with a :27.3 final panel. Mitch Cohen, Jeff Kuhen, John Levy and Hurrikane Racing own the Cams Card Shark-Blazing Yankee colt, now a winner of $250,260 this year.

The first four in each of the four two-year-old divisions return next Saturday for rich Matron finals.