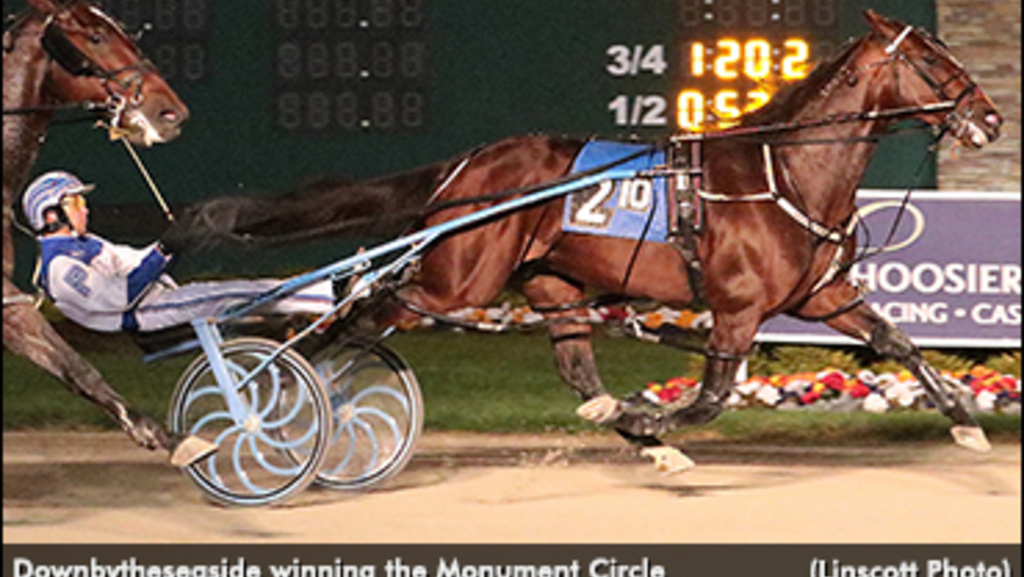 Following a second-place performance in the Breeders Crown, Downbytheseaside delivered as the 8-5 favourite in the $245,000 Monument Circle Pace at Hoosier Park on its Saturday, November 4 program, one of four stakes events for sophomores on the card.

Positioned third through a :26.2 opening quarter, Chris Page angled Downbytheseaside off the rail into the backstretch, pursuing pacesetter Miso Fast through a :53.1 half, taking the lead moving towards the turn. Controlling through a 1:20.2 third-quarter, Downbytheseaside led Miso Fast into the stretch, while Filibuster Hanover, from second over, rallied off cover towards second, and Eddard Hanover weaved into competition late while Miso Fast and Funknwaffles, off a first-over trip, dropped out of contention. Downbytheseaside held a three-quarter length advantage at the line over Filibuster Hanover.

By Somebeachsomewhere out of the Allamerican Native mare Sprig Hanover, Downbytheseaside, owned by Country Club Acres, Joe Sbrocco, Richard Lombardo, and the Diamond Creek Stables, won his 11th race in 19 starts and his 19th in 32 overall, earning $1,903,028. Trained by Brian Brown, he paid $5.40 to win.

Ice Attraction parked the mile and powered to the front through the stretch to win the Crossroads of America in 1:53.3.

Sent the 4/5 favourite, Ice Attraction floated off the gate fifth, wide and loosely tracking a quarter move by Thats All Moni by the quarter in :27. Thats All Moni took control midway down the backstretch, with Ice Attraction gradually advancing uncovered through a :55.2 half and soon drawing alongside the leader at three-quarters in 1:24.2.

Ice Attraction overtook Thats All Moni through the stretch, kicking away to a three-length lead, while Overdraft Volo edged off the rail and split horses to take second, and Thats All Moni held positioning in third.

By Muscle Hill out of the Conway Hall mare The Ice Queen, Ice Attraction, owned by Ake Svanstedt, Douglas Sipple, Mal and Janet Burroughs, and Little E LLC, won her sixth race in 19 starts this season and her ninth in 28 overall, compiling $490,842 in earnings. Trained by Ake Svanstedt and driven by Trace Tetrick, she paid $3.80 to win.

Riding the pocket, even-money favourite Agent Q slid through the passing lane to take the USS Indianapolis Memorial in 1:51.1.

Idyllic Beach left for the lead, setting a :26.3 quarter and a :55.3 half before being challenged by Bettors Up from first over moving into the turn. Passing three-quarters in 1:24, Idyllic Beach maintained control while drifting off the rail, leaving room once the passing lane opened for Agent Q to fire through and to the lead moving into the sixteenth pole, kicking clear of Idyllic Beach back in second, with Rockin Serena, off a rail trip, splitting rivals for third.

Owned by Martin Scharf, Rochetti Cassar Racing, and Robert Muscara, Agent Q, by Western Terror out of the Real Desire mare Teenage Paige, won her ninth race in 16 starts this season, and her 12th in 26 overall, surpassing the $1-million mark in career earnings. Trained by Aaron Lambert and driven by David Miller, she paid $4.00 to win.

International Moni left for the front, taking control before the half and maintaining the lead up to the line narrowly over pocket-rider Devious Man to take the Carl Erksine Memorial in 1:53.

Devious Man was wide through a :27.1 quarter, clearing control into the backstretch. International Moni, drafting his cover, soon marched towards the top, taking the lead prior to a :55.2 half. What The Hill, the 3-5 favourite, angled first over from fifth moving around the final turn, drawing near to the top pair before dropping out after a 1:24 third-quarter.

Through the stretch, International Moni maintained the lead over Devious Man, who tipped wide moving into the eighth pole and edged closer to the front, finishing a nose shy of victory at the line, with the pair clear of Bills Man rallying off cover to take third.

Winning his ninth race in 15 starts this season and his 10th in 27 overall, International Moni, by Love You out of the Speedy Crown mare Moni Maker, competes for owner Moni Maker Stable, and has earned $714,412 through his campaign. Trained by Frank Antonacci and drievn by Scott Zeron, he paid $15.00 to win.