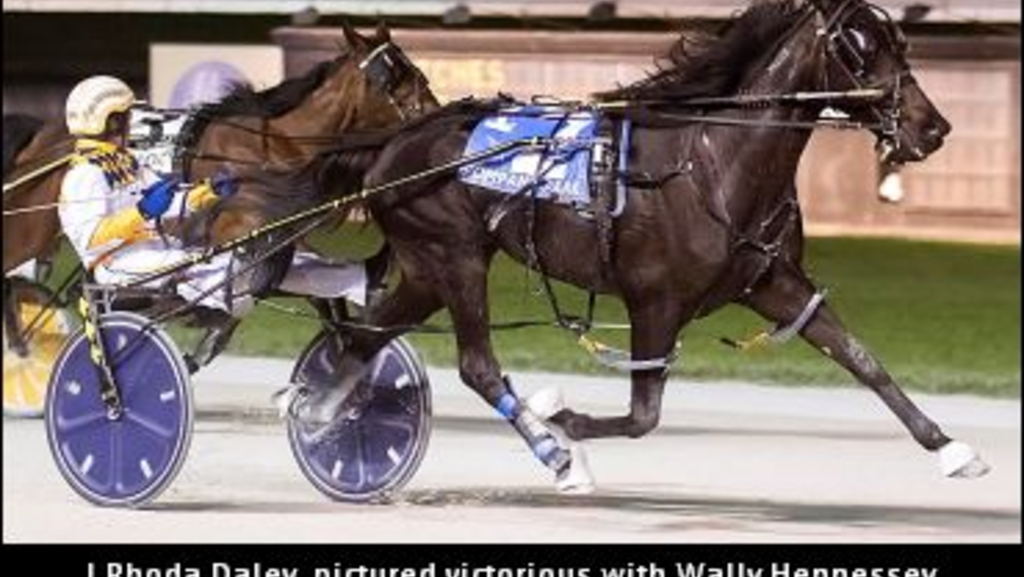 Pompano Park played host to the FSBOA's Super Night on Sunday (November 26). Eight champions were crowned and earned their respective share of over $420,000 in the total purses that were up for grabs throughout the races.

The festivities kicked off with five non-wagering events that were followed by the remaining three races which were conducted during the 11-race pari-mutuel program.

Here are the highlights:

The daughter of Desperado Dan, who is owned by Lee Clarke along with trainer Jason MacDougall, bided her time as Jennifer cut panels of :32 and 1:04.1. I Rhoda Daley then left the cozy pocket heading into the final turn and engaged the leader in war before edging clear once they straightened away for the drive home.

Hennessey said after the race that, "She's a rather handy filly and, while she has been prominent on the front end, she was nice and relaxed tonight and responded nicely when I asked.”

I Rhoda Daley now has seven wins and a pair of seconds from nine seasonal starts, good for bounty of $59,993.

Captain Thomas, victimized by breaks and beaten 19, 17 and 36 lengths in his last three starts, turned things around on Super Night with a sharp 2:02.4 win for Wally Hennessey, who was drove the gelded son of Proud Bushy for the very first time.

Trained by Kim Sears for owner John Campagnuolo, Captain Thomas was away carefully from his mid-pack post and settled in third as Brian, handled by Dave Ingraham, cut the early fractions in :30.4 and 1:01.4. On the backside, Hennessey had Captain Thomas in gear, and by the time they reached the third station around the final bend (1:32.2) Captain Thomas had a short lead on the outside. He then widened his lead with every stride right to the wire and stopped the timer in 2:02.4.

Prairie Eclipse, with Mike Deters in the bike, rallied for second. Brian held down third. Jiro Dangerous and Night Stalker also picked up cheques in the field of six.

"Kim (trainer Sears) told me he had the speed," Hennessey related, "but he needed to improve on his manners. Well, he was a perfect gentleman tonight."

After the win, Hennessey remarked, "This horse has some class. He has a very high turn of speed when asked and can brush a long way. He's got a good mark already (1:54.3) and I think he can go on and become a real good one."

Trained by Mike Deters, Gold Star Diablo won for the seventh time in nine tries with the major share of this lofty purse sending his seasonal bankroll to $63,030.

Atlantic Crest, handled, as usual, by owner-trainer Sergio Corona, continued her dominance in the sophomore trotting division with a handy 1:58.1 triumph over Famous C (Hennessey). The winning margin was a comfortable one and three-quarter lengths.

The daughter of Crest, last year's Super Night champion, remained undefeated at Pompano Park with what was her sixth straight win.

The long rivalry between Im Done and Azzaro was decided on Sunday night with last year's Super Night champion, Im Done, throwing the knockout punch. He scored a one and a quarter-length win over his arch rival in 2:00.3.

Coming into what was the 17th and final round, each had an 8-8-0 scorecard from 16 previous lifetime ‘rounds’ (Im Done had held a slight edge in lifetime bounty).

At the outset, Im Done (Post 2), who was driven by John MacDonald, sprinted out to grab the early lead from Azzaro (Post 1), who was handled by Wally Hennessey.

On the backside, MacDonald let out a notch or two with a :28.4 third quarter, which thwarted any threat from his rival. In the lane, a :29.4 finale was the knockout blow, which left his rival a bit more than a length away.

After the race, driver John MacDonald said, "This rivalry of sorts has been fun. It's been back and forth all the way and I am happy for Jim (trainer McDonald) and Troy (owner Basista)."

With the win, Im Done became a repeat Super Night champion with his share of the purse pushing his seasonal earnings to $57,822 and $128,087 lifetime.

Prairie Panther, with Jim Meittinis in the sulky, made a quarter move to the top and then used a brilliant :27.2 finale to score a handy win over a game Maybe Ned, who was driven by Bryce Fenn. The margin of victory was three lengths in the 1:55.1 mile. Gold Star Spider, handled by J.D. Yoder, finished third after a first-over backside bid that brought him within striking distance around the third turn.

Prairie Panther, a gelded son of Royel Millennium, extended his winning skein to seven with the win, which sent his seasonal earnings to $55,817 and $117,507 lifetime.

After the win, driver Jim Meittinis remarked, "He's been sharp since he got to Pompano and I thought it best to let him do his thing – and that is getting to the front and letting him take care of the rest. He did just that tonight.”

Trained by Mike Deters, who co-owns with Laurie Poulin, Prairie Panther was 1-10 in the betting and returned $2.20 to his multitude of backers.

Krinda, driven by Wally Hennessey, redeemed herself from a disappointing outing one week ago by scoring a gate-to-wire win in 1:57.1.

The daughter of Six Of Diamonds posted panels of :28.2, :58.4 and 1:28.2 before sprinting home in :28.4 to score a handy two and a half-length win over the fast-closing Prairie Foolish, who had Jim Meittinis in the bike. Prairie Easter was third for Corey Braden while Starcasim finished fourth. Diamond Eyes finished fifth in the quintet of youngsters.

"Last week," Hennessey said, "she tried to drive me. She just had an off night and, after a tough trip on the outside, just kind of gave in from being tired.

"This week, she let me drive her. She was nice and relaxed and was back to the way she had been before. Kim (trainer Sears) made a few small changes to her rigging and she was a whole lot better this time around."

As the even-money favourite, Krinda paid $4.00 to win.

Tay Tay M, with Wally Hennessey in her sulky, scored a gate-to-wire win in 1:55.1. She completed her mile on the strength of a final half in :56.4.

The daughter of Six Of Diamonds, owned by Jay Sears along with Richard Dunmire, blasted off the wings from Post 6 and had the racetrack just a few strides off the gate. She posted panels of :28.2, :58,2 and 1:26.2 along the way and sprinted away from Prairie Cowgirl (Jim Meittinis) to score by four and a half lengths. Gold Star Aurora (J.D. Yoder) was third, eight lengths away, while Bella Pat and Golden Diamond also picked up minor awards in the classy septet.

After the event, Hennessey related, "Ya know, I thought I'd leave out of there and find an advantageous spot somewhere up close, but it turned out that it was relatively easy to make the top.

"She picked up the pace herself when Jim's (Yoder) horse (Gold Star Aurora) tried to challenge around the final bend and she was very sharp in the lane to the wire."

Besides the stakes program on Sunday night, Pompano Park presented the $10,000 Open Handicap Pace, and Panocchio, the outstanding seven-year-old gelded son of No Pan Intended, scored a 1:52.1 win for Wally Hennessey.

Mister Daytona finished in a dead-heat for second with the fast-closing Sing For Me George (John MacDonald). Drachan Hanover and Bestinthebusiness completed the order of finish.

Panocchio earned his 58th career win in what was his 137 start. The victory pushed his lifetime earnings to $485,643 to go along with his track record mark at Pompano Park of 1:48.3.

Racing continues on a Sunday through Wednesday schedule through mid-December when the schedule expands to a five night a week schedule.