Media Presses Hudak For His Position On Revenue Sharing

During a recent interview, Ontario Progressive Conservative Leader Tim Hudak has stated that he is for racetrack gaming expansion instead of new casinos, and that he supports a revenue sharing arrangement. However, the opposition leader stopped short of commiting to what a Conservative Government would do if his party were to win an election in the near future. During the sit-down discussion with the Ottawa Sun this past Friday, interviewers tried to get Hudak to go on the record in regard to whether or not his provincial government would introduce a revenue-sharing agreement with Ontario horse-racing if they ultimately take the province's reins.

The segment of the interview in which Hudak discusses gaming runs roughly 11 minutes in length.

Hudak says numerous times during the interview that his preference for gaming expansion would be for that expansion to happen at existing racetrack sites, with table games added. He also calls for a referendum to take place in any municipality looking for a new gaming facility.

At one point, Hudak states that Ontario should be supporting jobs right now, not slashing them (Ontario horse racing employs upwards of 60,000 Ontarians). Given the nature of the discussion, many in Ontario horse racing would construe that as PC support, going forward, for the tens of thousands of horsemen that have found themselves in limbo since early this year.

By the end of the interview, Hudak is pressed on horse-racing's million-dollar question: Would the Hudak PC Government install a revenue-sharing agreement with Ontario horse racing if it came into power in the Province of Ontario?

"It seems to me that if you have a site (existing gaming location) that is at a racetrack, there should be some sort of sharing agreement, because you get economic spinoffs, you support the local industry, and you are actually using their site. That seems to be sensible and fair."

While Hudak was careful to point out that his government, if elected, would evaluate the current state of gambling at the time before making any decisions, he did have the following comment about the slots-at-racetracks program: "I think that was a program that actually worked. In fact, it was emulated in other jurisdictions."

At the conclusion of the interview, Hudak states that he believes the Gaming Modernization plan is a distraction, stating the following: "If the election were tomorrow, full stop on this (OLG gambling modernization) initiative. I think it's wrong."

To view the Ottawa Sun interview in its entirety, click here. 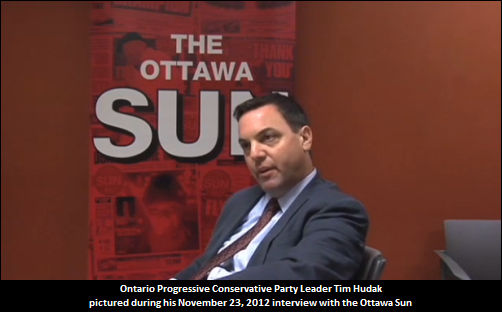 "It seems to me that if you

"It seems to me that if you have a site (existing gaming location) that is at a racetrack, there should be some sort of sharing agreement, because you get economic spinoffs, you support the local industry, and you are actually using their site. That seems to be sensible and fair."

"While Hudak was careful to point out that his government, if elected, would evaluate the current state of gambling at the time before making any decisions".

This remark supercedes everything he might have said in which readers interpret as being supportive to a continuation of SARP; if he was an advocate of SARP, he would have said so.

OMAFRA has indicated that they will subsidize horse racing up to 2016, they just haven't said to what extent. "Better the devil you know"

Mr Hudak needs to take a

Mr Hudak needs to take a stand that is unequivocal for one reason regardless of the election date. Support the SARP and in the process make every prospective US Casino interest nervous about making a pitch for a casino in Ontario. That may not deter Larry Tannenbaum but he is a minor player in the big pond of international casinos. Let him eat his bingo deals, but make sure he gets no sweetheart deals Mr |Hudak.

Ted Wilson has hit the nail

Ted Wilson has hit the nail squarely on the head. In the recent series about racing at Kawartha, McGuinty once again said that the choice was health care and education or horse racing. It may be B.S., but it is a very powerful soundbite and could be devastating in an election. I still believe the main purpose of the'modernisation' is to transfer 10000 to 12000 OLG jobs from the public payroll to the private sector. The PCs would agree with this. The trick is how to do it and save racing. The Liberals don't care and the NDP don't seem to have any ideas. The industry has to trust the PCs and ,meanwhile, get its own house in order, especially in developing new streams of revenue.

In reply to I agree with Ted by Chris Puigmarti

I found Mr Hudak's interview quite encouraging. He does see through the Liberals scheme of building casinos then adding table games and then saying "see how much more $ we can make" He does not quite undertand why they just don't add table games to the existing venues which are the tracks. When it comes to politicks you get it in grey and very seldom in black and white. He also states that when the PC's were in power they had a revenue sharing agreement with tracks but cautiausly won't step into the debate of subsidy.
All in all I was impressed with Mr. Hudak and was left with the impression that he would help the race industry by leaving the status quo.

The answer to the Liberals

The answer to the Liberals attack of Healtcare and Education is easy. Here's how Tim Hudak should respond: The Liberal Party is correct. We do support the Revenue Sharing plan Slots At Racetracks. A Industry that generates 1.2 Billion guaranteed to the Ontario Treasury and creates 30000 full time and 60000 part time jobs, Who pay taxes of 260 Million a year that helps with Education and Healthcare is a no brainer for Ontario. What the Liberal party doesn't want to tell you is they would rather partner with Rich American Casino owners and Rich Bingo Owners to give them a bigger piece of the pie who will not generate One Tenth of the jobs or One tenth of the Tax Revenue. Our policy is Ontario Jobs, Ontario people first that's who we want to partner with then the Liberal way of Rich American Casino owners and Bingo Parlors before jobs and Rural Ontario.

I agree with Ted

I agree with Ted Wilson...Hudak has to be cautious. Dwight Duncan is so hell-bent on his little speech of "when it comes to health care and education vs horse racing, we will always chose health care and education". The Liberals will do their little slam campaign like they did in February to fool the urbanites into believing the rich horse man takes from our kindergarten and our seniors. I believe Mr. Hudak got a wake-up call last election. He deserves a chance. What do we have to lose? I know Lisa MacLeod is going to do her best to help us all.

I believe that Mr Hudak was

I believe that Mr Hudak was quite clear in saying some sort of sharing agreement is in order when gaming is at a racetrack; so let's give Mr Hudak a little space folks!

I think horsemen will have to

I think horsemen will have to appreciate that Mr. Hudak cannot come right out and say he will reinstate the SARP. The Liberal government has done such a good job of spinning the program as a "subsidy", that he risks alienating the urban (Toronto) voters if he is percieved as being supportive of "subsidizing rich horse owners" (not my words of course). The industry may have to take what the PCs can give us at this time, which is their support in so many words. They must win an upcoming election before they can come to our aid. I think our best bet is still to support the Conservative party and do our best to get them elected in the Spring.

No committment to horse

In reply to Generally positive comments by youngr46

Any new deal will change but

Any new deal will change but Hudak did discuss Revenue Sharing...that is a start.

First time I have heard Hudak

First time I have heard Hudak speak on horse racing. Seemed like a clear statement as to how he would have his party proceed re: casinos and horse racing.... It is important all voices in Government are heard on this issue. The Liberals will put a wonderful confusing front on how they are trying to save horse racing by making them non profit....now that's as clear as mud.

Mr. Hudak is being a little

Mr. Hudak is being a little coy; he has to be! He can not allow the Liberals to frame the debate as -"health care and schools vs. horse racing". They have tried this already, but Mr. Hudak has not taken the bait, nor should he. We have to trust that MPP Lisa Macleod will keep him on the straight and narrow. I have full confidence in that!
Edward (Ted) Wilson

Generally positive comments ... but no commitment to reinstate SARP or negotiate a new revenue sharing agreement with the horse racing industry. Not unexpected as todays politicians never seem to truly "stand for anything". They need to know if a particular stance will mean a net increase in votes. When they're not in power they will say whatever is necessary to get into power and when they're in power, they'll say whatever it takes to stay in power.

TRUST who can HORSERACING

TRUST who can HORSERACING TRUST - it is clear that no statement with regard to reinstating SARP is not going to come from Mr Hudak, does this mean MPP Lisa McLoud and others like Anthony McDonald who have so strongly shown support have no voice as well as all the other respected MPP's that have come out in support of horseracing "NO IT DOES NOT" but as their leader they now need to put internal preasure on Mr Hudak he is comming off as evasive as McGuinty and Dwight Duncan please let me know if I need to support Andrea Horvath if for nothing other than a swing vote voice - what am I saying she had that chance and through horseracing under the bus. Anthony McDonald for Premier