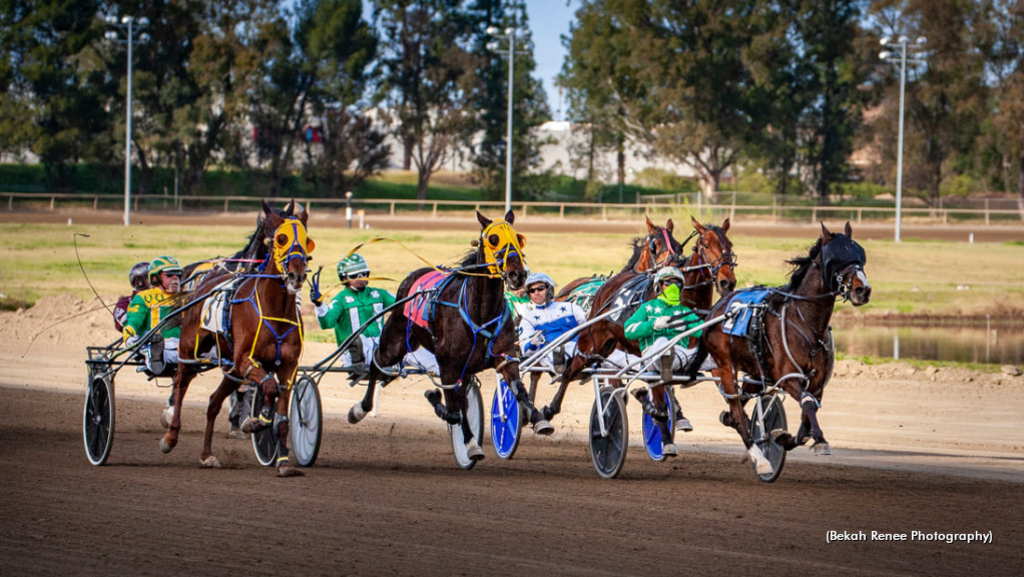 Dancin Lance, fresh from a sparkling victory in the Rod Knittel Free-for-All on opening night, heads the cast in Friday night’s (Nov. 25) $8,000 Open Pace on a program that will also feature a pair of elimination heats for the Donald Arnstine Pace.

A 10-race card is on tap under the Watch and Wager LLC banner with first post set for 6:45 p.m. (PST) and racing is now being conducted on a Friday/Sunday basis with a 4:55 p.m. scheduled start on Sunday (Nov. 26).

A six-year-old son of Always A Virgin, Dancin Lance goes about his business for owner Juan Pacheco and trainer Leon Smith with Luke Plano once again handling the lines from the outside post in the field of eight.

Sent the 8-5 second choice in the Rod Knittel, Dancin Lance bided his time early while stalking what turned out a contested pace. Plano swung his charge three deep on the final bend to attack the leaders and came home to prevail by six lengths in a 1:54.1 mile.

A Major Omen will be looking to make amends for owner-trainer-driver Gerry Longo after being hard used early while parked and having to settle for a fourth-place finish as the 3-5 choice in that opening-night headliner.

Taking on that pair are Its Pointless, Keystone Tenacious, Albergo Hanover, Watchmeneighneigh, California Rock and Roll To The Beach.

The Open pace will occupy the seventh-race slot on the card, while the two Arnstine Elimination heats will go as the second and fifth events on the evening.

Friday’s opening-night card was a good one for last meet’s leading trainer Quentin Schneider with four victories, including visits to the winner’s circle with the Robin Clements-owned Prom Queen and Marced Magic.

Prom Queen posted a 20-1 upset in the evening’s seventh race while romping home by five lengths with Mel Mullet at the controls, in the process establishing a new mark with the 1:53 clocking.

Marced Magic came right back in the next contest to win going away as the 6-5 choice with Mooney Svendsen doing the honours while earning his 14th snapshot on the season from 36 trips to the post.

“I was obviously very happy with both performances,” Clements said. “Prom Queen was feeling very spicy that morning in the pen, bucking and running around very happy.

“When Mel had to pull her before the half, I thought she would cave coming down the stretch as she doesn’t really like racing on the front end, but she just kept getting stronger and surprised us with that [1]:53 mile

“As for Marced Magic, he’s usually very strong coming off a break and he was also strutting his stuff that morning. The time off agreed with him, plus toward the end of Running Aces Quentin raced him at the Wisconsin fairs so he wasn’t raced hard this summer. Mooney also gets along very well with him.”

Robin added that it was a great opening night for Qks Racing, Kim and Quentin and their team of Aron, Heather, Ed and Mel, who “Have done a great job with my kids.”