Summer Indian continued his domination of The Meadows’ trotting elite, winning his third straight — and fifth in the last seven — in Monday’s $18,000 Preferred Handicap. His time of 1:52.3 was a tick off the track’s all-age trotting record. 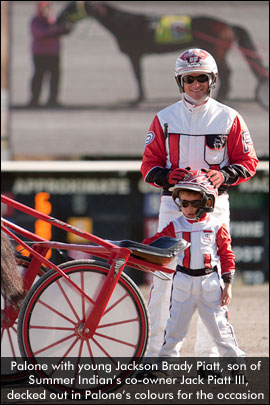 Summer Indian was caught wide in a three-ply battle for the early lead, finally making the front in a rapid :27.2. But he was untouchable thereafter, rolling on for Dave Palone to defeat Count Me In by two and a quarter lengths. Rembrandt Spur finished third.

Tony Hall, Aaron Merriman and Brett Miller each drove three winners on the 16-race program. With one victory on the card, Wilbur Yoder pushed his career total to 999.