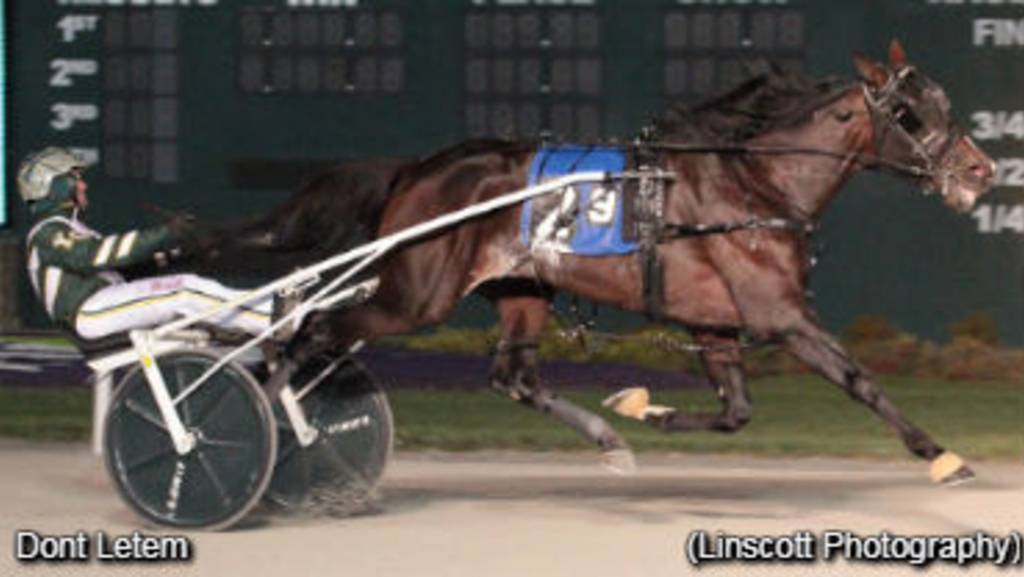 Sent off as the heavy betting favourite, Dont Letem left alertly from post two but Mass Fortune K and Matt Kakaley were a step quicker through the opening quarter in :27.4. Gingras moved Dont Letem to the front just before the half in :55.1 and was immediately joined on the outside by Pilot Discretion and Andrew McCarthy.

Dont Letem was able to turn back Pilot Discretion through the three-quarters in 1:23.2 and was on top with a two length lead turning for home. Using a :28.2 final quarter, Dont Letem stayed on task and trotted strong to the wire finishing five lengths in front of late-closing Chin Chin Hall and Peter Wrenn. Pilot Discretion held on for third.

“He’s going to drive me crazy,” trainer Nancy Johansson noted with a smile after the victory. “It’s just whatever horse shows up. He obviously has tremendous speed. He has tremendous speed and the talent, he just needs to behave. I never know what horse is going to show up but when he is on his game, he’s incredible.”

One of the biggest upsets of the night came in the very next race on the program as De Los Cielos Deo and Matt Kakaley got up in the final strides of the mile to upset the heavily favoured Hickfromfrenchlick in the $225,000 Monument Circle Pace for three-year-old pacing colts and geldings. De Los Cielos Deo stopped the timer in 1:49.2.

With an eight race-win streak on the line, Hickfromfrenchlick went to the front from post eight to dictate fractions of :26.4, :54.3 and 1:22.1 before ever feeling a threat from the rest of the field. De Los Cielos Deo sat patiently in third for much of the mile but was in perfect striking position turning for home. Kakaley tipped De Los Cielos Deo and he found a :26.3 closing kick to track down Hickfromfrenchlick late in the lane. Dealers Table and Sam Widger utilized a ground saving trip to round out the Trifecta. De Los Cielos Deo returned $10.40 to his backers at the betting windows.

“I was confident coming into tonight,” Kakaley said in the winner’s circle. “He was good last week in the Breeders Crown. He’s been pretty inconsistent but I knew if he showed up tonight he’d be good. I’ve only driven him a couple times but he’s got the speed. The way the trip worked out for him tonight was beautiful.”

Trainer Nancy Johansson teamed up with Yannick Gingras for two winners on the evening’s program as the duo first found the winner’s circle with The Ice Dutchess in the $120,000 Crossroads of America. After finishing third in the $500,000 Breeders Crown Final at Woodbine Mohawk Park last week, Gingras guided the post-time favourite to a 1:53 victory over Pure Chance and Trace Tetrick.

Utilizing a final quarter of :27, The Ice Dutchess was able to overcome a first-over trip and dug in gamely late in the lane to cross the wire four lengths to the good. The Ice Dutchess returned $4.20 to win for her backers at the betting windows.

The Ice Dutchess has now won 11 of 27 lifetime starts and boasts a lifetime bankroll of $774,029 for owners Coyote Wynd Farms. The daughter of Muscle Hill-The Ice Queen was bred by Stephen Dey and David Reid.

Three-year-old pacing filly Sunny Dee made her Harrah’s Hoosier Park debut a winning one after she went gate to wire in The $100,000 USS Indianapolis Memorial. The Canadian homebred bested her competition in 1:52 with driver Tim Tetrick in the bike for trainer Robert McIntosh.

Sunny Dee made her game winning move down the backside and was able to hold off a hard charging JK American Beauty and Brett Miller late in the lane to get the win and deliver as the post-time favourite. Fully A Virgin and Michael Oosting also rallied well late for third.

With the win, the daughter of Sunshine Beach-West of LA, now sports a lifetime bankroll of $436,595 having won 13 of 22 starts. The filly is owned by and was bred by Robert McIntosh Stables, C S X Stables and Al McIntosh holdings.