Back to Jack Vernon, who won a several-horse scrum for the early lead, then gave nothing else a shot.

The nine-horse feature (one came up ill) served as the opener of seven added-distance trots broadcast to a French audience via simulcast.

From post position 4, Jack Vernon stuffed Gruden (Brian Sears) in behind, setting up shop before a :28 opening quarter-mile. It was a :57.1 half and 1:26.3 three-quarters before invading 3-2 favourite I Know My Chip (Jim Marohn Jr.) made his second move.

Wide early into a four-hole, I Know My Chip came first-up, but the bid was both brief and ineffective. Meanwhile, Jack Vernon was gone, widening past the 1:55.3 mile and opening four lengths on the final turn. 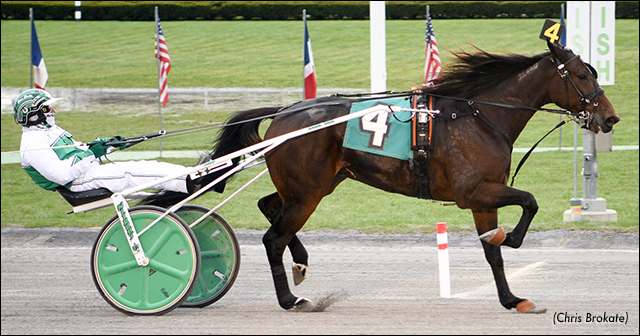 He finished it off by 2-1/4 lengths, getting the mile and a quarter in 2:25. Andy Ray (Jason Bartlett) offered late foot to wind up second, with Gruden, Lean Hanover (Jordan Stratton) and Lord Cromwell (Matt Kakaley) settling for the minors.

I Know My Chip back-pedalled to last.

For second choice Jack Vernon, a five-year-old Muscle Hill gelding owned by the Andy Miller Stable and trained by Julie Miller, it was his 10th win in 25 seasonal starts. The exacta paid $66, the triple returned $466.50 and the superfecta paid $2,828.

Technical difficulties resulted in the cancellation of the "New York, New York Double" for Sunday afternoon.

The next Sunday matinee is Nov. 25 (post time TBA).