Leonidas A Pulls Off Potomac Upset 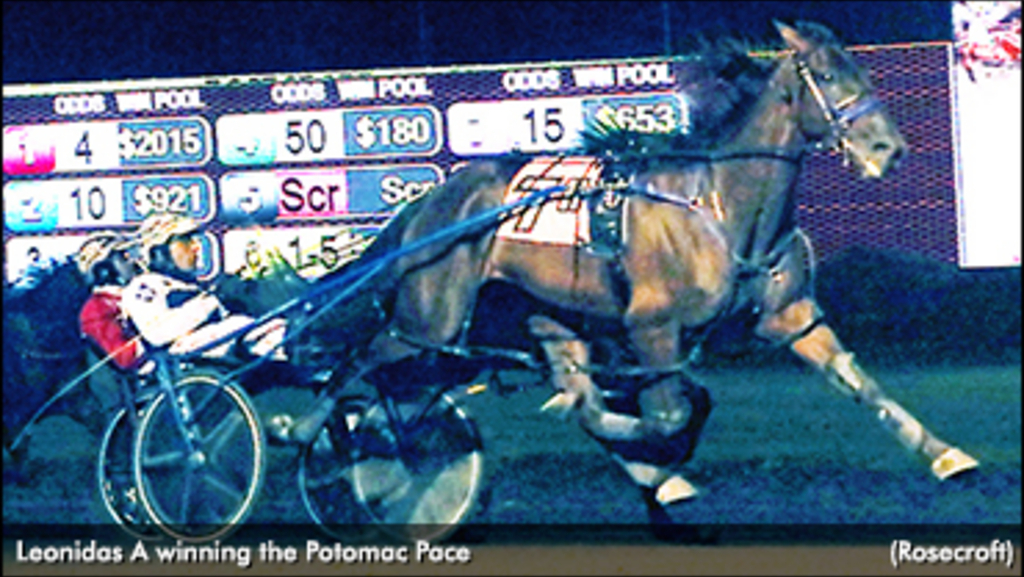 Leonidas A, a 15-1 longshot driven by Austin Siegelman, came charging down the stretch Sunday evening (Nov. 15) past 1-5 favourite Bettors Wish to win the fifth edition of the $100,000 Potomac Pace Invitational from Rosecroft Raceway.

The five-year-old Australian bred, who arrived in the U.S. in July after being purchased by Steve Finklestein’s Jesmeral Stable, set a lifetime mark of 1:48 while winning his 13th race this year. Bettors Wish was second while World of Secrets finished third.

The complexion of the Potomac changed earlier in the day when Breeders Crown Open Pace winner Century Farroh was scratched sick as was Highalator.

Despite the scratches, Leonidas A, a top open pacer in New York, showed off his exciting closing kick to beat who many consider to be the top older pacer in the country in Bettors Wish.

When asked if he thought he had enough to beat Bettors Wish down the stretch, Siegelman said; “Absolutely, I thought I had enough to get by him. [Leonidas A] is a stone-cold closer. Each time I’ve driven him he’s never gotten tired.”

Leaving from post 7, Siegelman took Leonidas A back to last while Stars Align A paced a :25.1 opening quarter, the fastest in Rosecroft history. While Stars Align A took the field past the grandstand and approached the half, Siegelman kept Leonidas A to the inside and along the pylons while Bettors Wish went second over behind Backstreet Shadow and a :52.4 half.

“I’m not going to be four or fifth over,” Siegelman said. “That’s not going to work out, so I got really lucky…I was able to slip out. I thought I might be in trouble going up the inside.”

“I’ve never won a race like this before, so I’m just trying to take it in,” Siegelman said.

“We knew he was something special, especially after his last race at Yonkers,” said trainer Sheena McElhiney. “I think he’s starting to get used to this style of racing now.”

Since being inaugurated in 2016 by the Maryland Jockey Club, the Potomac Pace has played host to the sport’s biggest stars. Previous Potomac Pace participants have included Dealt A Winner, Keystone Velocity, Endeavor, All Bets Of, Shamballa, Western Fame, Filibuster Hanover and Split The House.

Great race. Love how Leonidas brought his "A" game to the race ;)