SBOA Finals In The Books 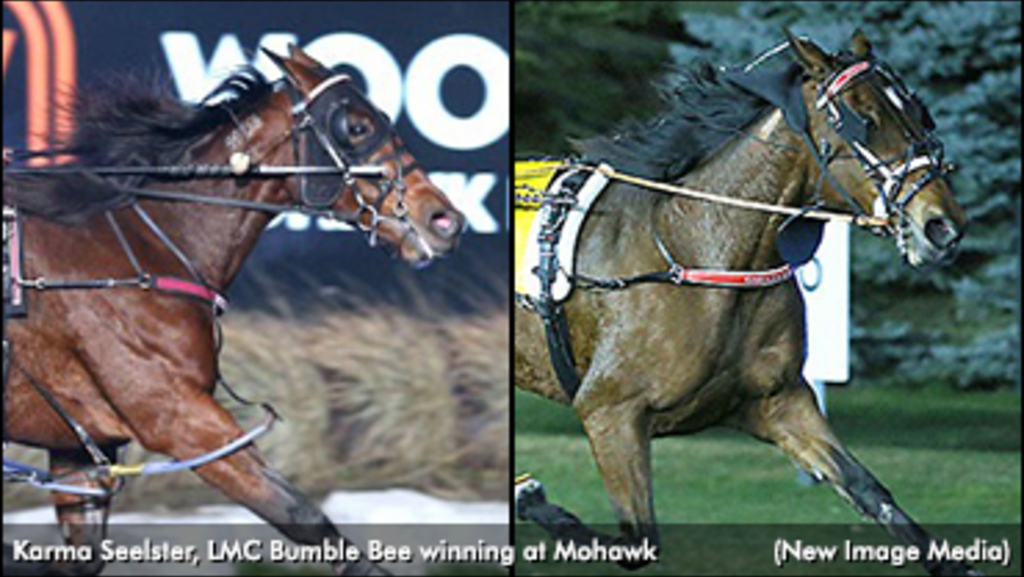 With the temperature sitting at the freezing mark, the SBOA’s saw full fields of 10 Ontario-sired fillies clash in the $138,518 pacing final and $141,518 trotting final.

Karma Seelster finally got her big win, shooting up the rail after a two-hole trip to win in 1:53 for driver Doug McNair and trainer Gregg McNair. The daughter of Sportswriter entered the evening with over $200,000 earned this season, despite having just found the winner’s circle twice in 14 starts.

“She finishes second, third quite a bit and I mean going for money like that it adds up,” said Doug McNair of Karma Seelster. “It’s a little frustrating sometimes as a driver when you get a trip like that and sometimes she’ll shoot through and just kind of hang around and finish second and third, but she really put out tonight and raced great.”

Karma Seelster blasted to the front, posting a :27.2 opening quarter. Rose Run Victory also flashed early speed and made the front early in the second-quarter after being parked around the first turn.

The middle-half saw little action, as Rose Run Victory got to the half in a comfortable :56.3 and three-quarters in 1:26. Lauras Love angled out from third to sit first-up on the far turn, while Rose Run Vantage followed that cover.

In the stretch, Karma Seelster found daylight up the pylons and shot through to the lead, holding off Rose Run Vantage in the centre by a head in 1:53. Lauras Love finished third, while Rose Run Victory was fourth.

“I figured the way Hensley’s filly (Rose Run Victory) raced last week she was probably the one to follow and as soon as I made the front he was on the move right away,” said Doug McNair. “In the last turn I just thought we were racing for second or third off those fractions, but things opened up and she raced great.”

Karma Seelster’s win is a family affair, as she is owned by Hall of Famer Keith Waples, his wife Eileen Waples and their daughter Karen Hauver. The pacing filly now has three wins and $277,570 earned this season to bring her career totals to seven wins and $539,775.

The SBOA Filly Trot final delivered a thrilling finish, with LMC Bumble Bee capitalizing off some nifty stickhandling from driver James MacDonald to win at odds of 9-1.

“I was in an awful spot with nowhere to go,” said MacDonald about his position at three-quarters. “They kind of hooked wheels for a second in front of me and I got a seam to get out and at the top of the stretch I was just dying for some daylight because I had all kinds of trot.”

LMC Bumble Bee hustled off the wings of the gate to lead into the first-turn just before Shape Shifter cleared to command at a :27.1 opening quarter. Princesspartypants, who was parked around the first turn, got a rough ride in the second-quarter on her way to the top, finally clearing at a huge :55.2 half.

Race-favourite P L Notsonice was out and moving going to the half, taking over the top spot racing to three-quarters in 1:25.1. Second-choice Susies Lady was left uncovered first-up, while LMC Bumble Bee was pinned at the rail and shuffled back to seventh turning for home.

The stretch drive saw P L Notsonice and Susies Lady square off for a good chunk, but neither filly had enough in the tank to hold off the back field.

Jula Shes Magic and Yen were marching strong in the centre, but the strongest of all was LMC Bumble Bee. The Nick Gallucci trainee and MacDonald were flying up behind rivals before diving down to the rail and maintaining momentum to pull off the thrilling victory by three-quarter lengths over Jula Shes Magic. Yen grabbed third, while Susies Lady and P L Notsonice settled for fourth and fifth, respectively.

A daughter of Muscle Mass, LMC Bumble Bee has found her best stride late in the season after some setbacks.

“When we trained her down, we thought she was the best trotting filly we had ever owned,” said owner Frank Cirillo, who shares ownership with his daughter Loredana. “She got two surgeries last year, she had two surgeries this year after the first Gold and we never thought she’d make it back, but (Nick) Gallucci did just an amazing job bringing her back, so it’s just unbelievable to be standing here right now.”

The Gallucci-trained LMC Bumble Bee is now four for nine with $121,975 earned on the season. Her clocking of 1:55 on Saturday established a career best.

LMC Bumble Bee will be racing in the upcoming Harvest Series, as she had little money on her card prior to October and met the eligibility. She paid $20.00 to win.