Kelley To Be Honoured By NY Breeders

The Harness Horse Breeders of New York State has announced that Saratoga-based trainer Paul Kelley will be the recipient of its 2017 Bruce Hamilton Memorial Medal, which will be presented after the USTA District 8 meetings, during the New York Sire Stakes year-end awards banquet, which will be held at Saratoga Raceway Casino and Hotel on Sunday (November 19) at 7:30 p.m.

The Bruce Hamilton Memorial Medal is presented annually by the Harness Horse Breeders of New York State in recognition of outstanding contributions to the sport of harness racing and work contributing to the improvement of the breed in the State of New York.

Kelley is being honoured for his longtime support of the breeding and racing program in New York State, and for his outreach to those interested in getting into the sport through partnerships that allow individuals the opportunity to experience the excitement of harness racing first-hand. He is also being honoured for the integrity and enthusiasm he exudes on a daily basis in the name of harness racing in general, and the Empire State in particular. 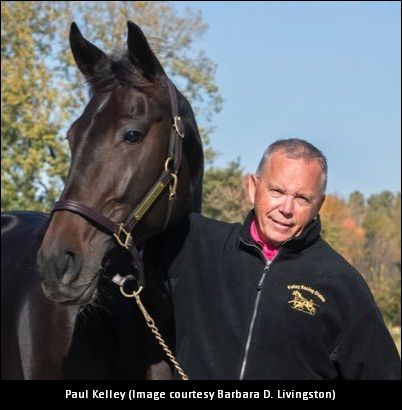 Kelley was born in Walpole, Massachusetts just minutes from Foxboro Park, but grew up living in Maine. His father, Jack Kelley, was the head hockey coach at Colby College in Waterville, but he also raced ponies at the New England fairs over the summers with his friend, Bill Bauer. From there, their interest gravitated to Foxboro Park and Standardbreds and that is where the young Kelley got his first taste of harness racing and initially became involved in the sport.

Kelley attended Colby College, and after graduating in 1977, took a job in the athletic department at Boston University. But knowing he wanted to spend his life training horses, Kelley left that position to start working with Standardbreds full time. He went from Lewiston, Maine to the Meadowlands over the course of time, working for several trainers and honing his skills. Kelley credits Leo Bauer and Ted Wing as being instrumental to his equine education before he struck out with his own public stable in 1995 at Foxboro Park.

Kelley has since moved his base of operation from Massachusetts to New York State in Gansevoort (near Saratoga) where he has been training now for many years.

Today, Kelley’s stable specializes in two and three-year-old stakes performers, as well as top-quality raceway stock that compete in some of the industry's most important events at every track in the northeast and Canada on the Grand Circuit. Kelley also has a heavy presence in the New York Sire Stakes, annually.

“First and foremost, it’s a real honour for me to receive this award in the name of the Hamilton family. I have known them for years and realize the commitment to racing in New York that Bruce, his father Dick and brothers Keith and Scott have made over the years,” said Paul Kelley.

“Bruce brought the breeding program in New York to a whole new level and was the point-man in getting the VLTs approved that allowed that to happen. To be recognized and receive this award in Bruce’s name is really special for me.”

The Bruce Hamilton Medal was named in honour of Bruce Hamilton who was the executive secretary of the Harness Horse Breeders for 18 years. In his position, Hamilton steered the New York Sire Stakes program through some of its most exciting and most challenging years, and during his tenure was able to unite the racetracks, horsemen and breeders in pursuit of video lottery terminals at the tracks and was instrumental in the eventual passage of that law in 2001. He passed away in 2003 after a long illness.

Hamilton was a tireless promoter of the New York Sire Stakes, an advocate for New York’s breeders and was universally liked and respected throughout the industry.