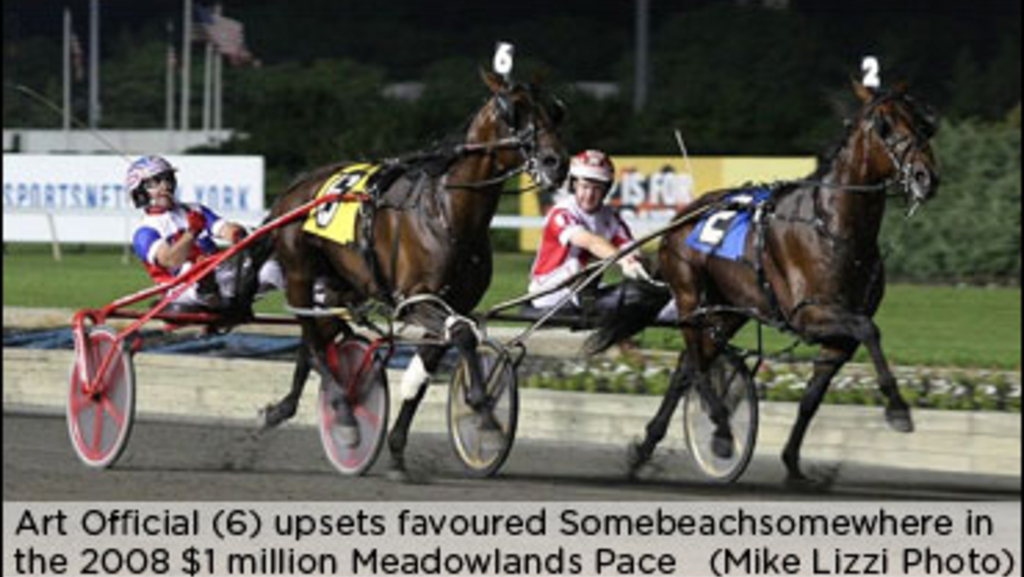 Rumours have been swirling all week regarding the sale of Art Official. It came as no surprise Friday morning when owner Jim Jesk confirmed with Trot Insider that there is a deal in place to see the four-year-old son of Art Major switch hands

. In addition to some of the details of the deal, Jesk commented on the horse's comparison to the great Somebeachsomewhere.

"Art Official will next race in the American National on Saturday," Jesk told Trot Insider. "After that, his fertility will be tested. If everything is in good order in terms of his fertility, he will change hands."

Earlier this week, Jesk told Trot Insider that the deal, worth $2.75 million, is with Joseph Muscara. Details on breeding arrangements are not available at this time.

To this day in some harness racing circles there is still much debate as to which was the better three-year-old pacing colt in 2008, Art Official or Somebeachsomewhere. Jesk spoke with Trot Insider about the comparison.

"One thing that cannot be denied is that both Somebeachsomewhere and Art Official left a long standing impact on their connections. It's a complete understatement, but Art Official has just been an unbelievable horse for us."

One cannot argue that Art

One cannot argue that Art Official is an excellent horse even with the knee issue but better than SBSW--no way! Just watching that replay of the Meadowlands Pace gives one shivers.

SBSW was a joy to watch every time out. He had a track presence that demanded your attention. The way he carried his head, his tremendous back end machine, the whole attitude that the track was his to dominate. He was a superstar on the track even when he got caught at the wire by AO. Which one will prove to be the better sire is anyone's guess but there hasn't been a race horse that caught everyone's attention (my gawd, even the Globe and Mail wrote about him!)during his entire racing career. Too bad he was retired so soon but that decision was made by wiser people than most of us. After all, they had the good sense to buy him and get the ball rolling.

I wish Joe Muscara well with Art Official in his prestigious stallion lineup.

I agree with everyone and

I agree with everyone and anyone that says that sbsw is the dominate horse 07 and 08, art official couldn't and never beat sbsw on any racetrack, and if it wasn't for yannick parking out sbsw this conversation wouldn't be taking place now, but art official did beat him at the meadowlands and he deserves his praise for that and only that race.

When they went to kentucky for their prospective races AO didn't even get close to sbsw's time and to beat it all sbsw did it all on his own, no rabbits in the race except him of course. SBSW might be one of the 5 best horses of all time.

Well it doesn,t seem to be a

Well it doesn,t seem to be a debate to me Art Official is a very good horse no one can argue that and i dont think ever has. Somebeachsomewhere is a GREAT CHAMPION ,He has shown it to the world in every one of his races never a dissapointment...not once.

Viewing both the Meadowlands Pace and the Down Under videos on SC today is interesting: " The judges charged Awesome Armbro's driver with not giving his horse every chance in the race..." Like 51.4 in the first half of the Pace? Which is preferable, in-line "deference boon" racing, or contesting races, at least to the half?

"To this day in some harness

"To this day in some harness racing circles there is still much debate as to which was the better three-year-old pacing colt in 2008, Art Official or Somebeachsomewhere"
I for one was unaware of this debate? When did this happen? When did we start comparing Art Official to Somebeachsomewhere as to who was the best three year old? Is this for real? Art Official won the Meadowlands pace, ok congrats but lets turn the page. Beach won The N.A. Cup., The Breeders Crown, the Messenger, The Confederation Cup. He won on a half in 49.2!
The Beach even gave Art Official a chance to Win the Jug but he wrapped those big white felt knee boots instead and couldn't get around the track at all. Anyway lets put this to rest once and for all. There is no comaparison between Somebeachsomewhere and Art Official! NONE!!!

How anyone in their right

How anyone in their right mind could possibly compare these two horses is beyond me. Forget his 2yr old season, Art Official was third best in his 3 year old year. He doesn't even compare to Shadow Play for my money.