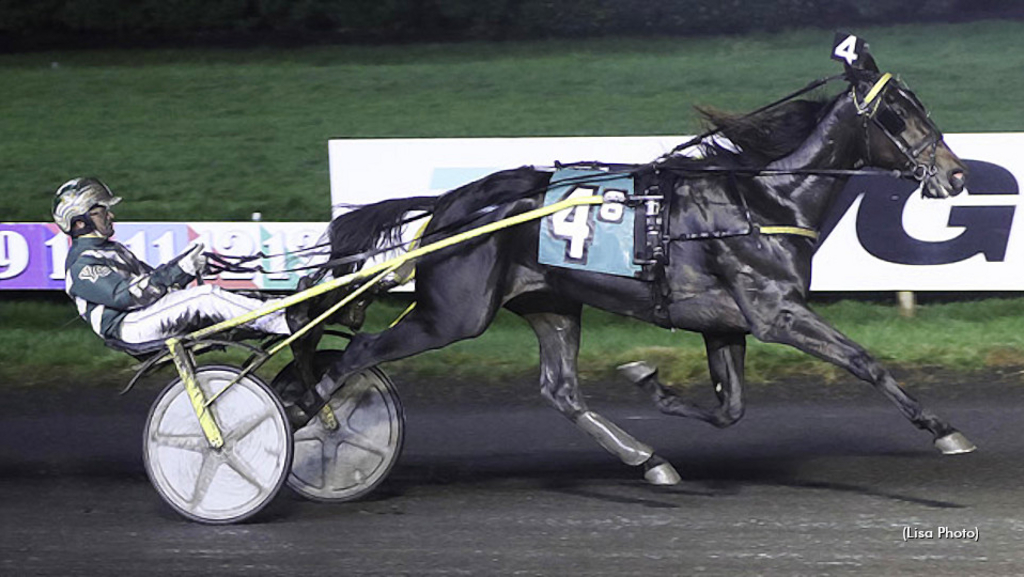 The cream rose to the top in Friday night’s two $80,000 divisions of the for two-year-old trotters as heavy favourites Blonde Bombshell and Celebrity Bambino reported home safe winners at The Meadowlands in the events sponsored by the Standardbred Owners and Breeders Association of New Jersey.

In the filly division, Blonde Bombshell exploded home to score by a length-and-a-half over The Wise One in 1:56.1 despite rainy conditions that made for a track rated ‘sloppy’ that created a -2 variant. Check Her Out was third.

Dave Miller guided the daughter of Walner-Hey Blondie for trainer Nifty Norman. After unspectacular seventh- and ninth-place finishes in her Breeders Crown elimination and final, respectively, ‘The Bombshell’ came to play, displaying a powerful final quarter after gapping second-over cover around the far turn.

Despite having made only one start (a win) before the Breeders Crown, Miller stuck with this filly. “She seemed to have a lot of ability, but she hasn’t gotten a chance to show it yet,” said Miller. “I think she has a bright future. She looked like she fit in there real well in this field and I felt pretty confident with her. She’s a real smart horse. She knows how to relax in the hole, and when you ask her to go, she goes.”

The ultra-consistent Celebrity Bambino scored as the 1-2 public choice in the split for colts and geldings, hitting the wire 1-1/2 lengths to the good over Prince Of Honor and Kimmeridgian in 1:55.1. The colt by Muscle Hill-Celebrity Ruth has now won four of 10 lifetime outings with nine on-the-board finishes, good for earnings of $349,182.

Driver Yannick Gingras had Celebrity Bambino up on the outside and after the leader, 7-2 second choice Prince Of Honor, at the quarter before settling in on the point shortly thereafter. The Ron Burke student then sailed home from there as much the best.

“I always liked him,” said Gingras. “It took a long time to get him healthy after he got sick in the summer. In the Breeders Crown [when he was second], he couldn’t have raced any better, but that’s the way it goes sometimes. If they had set it faster, I would have raced from behind tonight, but we found out the front end isn’t an issue. I was confident the whole time.”

Last week, driver Neil Glasser ended a 26-year drought when he guided Thndrfrmthethron N to victory lane in a GSY event. He only had to wait six days to win again, when he scored with the same horse in a GSY dash Friday night in 1:55. Talk about no respect. Last week, Thndrfrmthethron N returned $9.00 to win, this time the win payout was $16.60.

Racing resumes Saturday at 6:20 p.m. shortly after the “Celebration of Life” for Dave Brower concludes. The ceremony for the long-time lead Big M TV personality, who passed away five weeks ago at the age of 53, will take place in the winner’s circle and begin at 5:30 p.m.