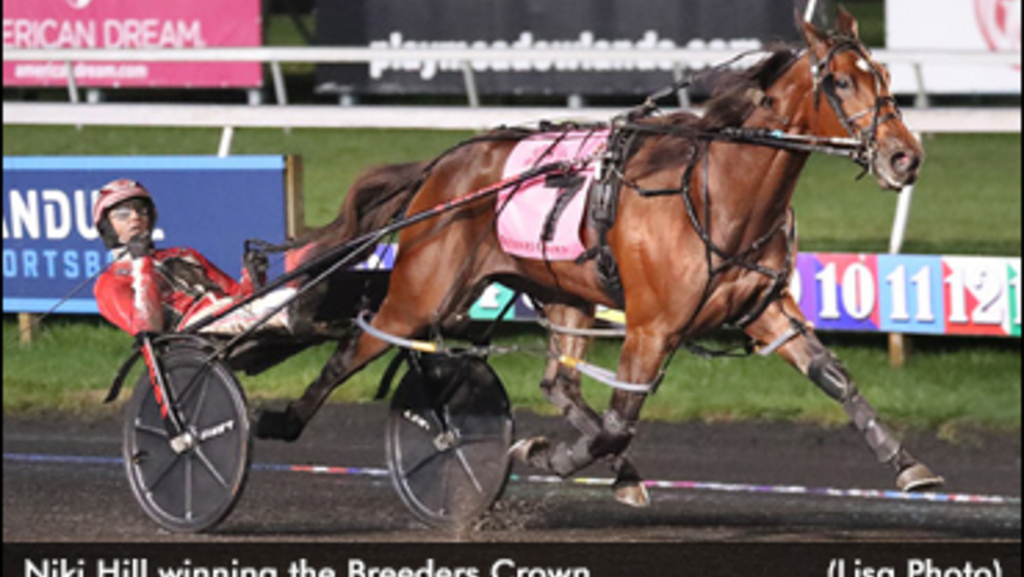 Niki Hill returns to action Saturday (Nov. 13) in the $220,110 Kindergarten Classic Series championship for two-year-old female pacers at The Meadowlands, two weeks after her dominant triumph under adverse conditions in the Breeders Crown.

The Chris Ryder trainee won the Breeders Crown for two-year-old filly pacers by 4-3/4 lengths in 1:51 on October 29 at the Big M, missing the stakes record by only three-fifths of a second despite heavy rain and strong wind. Her time over the sloppy track was the fastest of any race on the card.

“It was a statement from start to finish,” Ryder said after the performance. “I was super proud of her.”

The Meadowlands hosts four Kindergarten championships for two-year-old pacers and trotters on Saturday’s 13-race card, which begins at 6:20 p.m. (EST).

Niki Hill, a daughter of Always B Miki out of Road Bet, has won seven of eight races this year and earned $684,541 for owner Tom Hill. She is ranked No. 4 among all horses in North America in the current Hambletonian Society/Breeders Crown Top 10. Her only loss was a second-place finish in her Breeders Crown elimination.

“We had a little bit of a hiccup — she tied up a little bit, had a few minor issues,” Ryder said. “She was herself (in the Breeders Crown final).”

“She’s big and strong, but she is very smart about her trade,” trainer Brett Pelling said about the daughter of Captaintreacherous-My Little Dragon. “She’s absolutely push-button. I don’t think she is any faster than some of them, or any stronger, but she’s the full package.

“Her whole season was weighted toward the end. In the beginning, we recognized that she was a very growthy filly. She was quite tall, and you knew she was going to fill out, so we aimed for all the stuff in the fall.”

Pelling will send out the 5-2 morning line choice in Saturday’s $238,700 Kindergarten championship for two-year-old male pacers, Hammering Hank. The gelding, by Captaintreacherous out of History Repeats, has won seven of nine races and $125,300 for owners 3 Brothers Stables, Pelling Racing and Rojan Stables.

Hammering Hank, who finished a fast-closing fourth in the Breeders Crown, also enters his Kindergarten final off a win in the last preliminary round a week ago.

“He’s got high speed,” Pelling said. “He’s shown that in all his races. And he likes to bear down on horses.”

Fast As The Wind is the 5-2 favourite in the $300,960 Kindergarten final for two-year-old male trotters. He won a preliminary round of the series last week and finished second from post 10 in the Breeders Crown. Overall, he has won three of 13 races and $216,813 for owners LeBlanc and Kribbs, Joe Sbrocco, John Schmucker and Fodera Barbera Frank.

The colt, a son of Cantab Hall-Wind Stroll, won his first two races and finished third in the Peter Haughton Memorial before heading to Lexington’s Red Mile, where he battled sickness.

“At the beginning of the year, before we went to Lexington, we thought he was going to be a top colt,” trainer Tony Alagna said after the horse ended a streak of off-the-board finishes with a third in his Breeders Crown elimination. “We got him home and his liver enzymes were through the roof. We’ve been working hard on that, and [in the Breeders Crown] he was back to more what he felt like early in the year. I’m really happy with that.”

In the $294,580 Kindergarten final for two-year-old female trotters, Lilbitalexis is the 5-2 morning line favourite. The filly, by Walner out of Jolie De Vie, has won seven of 10 races and $173,362 for owners Pinske Stables and David Hoese. She won a Breeders Crown elimination and finished fifth in the final for trainer Richard “Nifty” Norman.

For complete entries for Saturday’s Meadowlands card, click here. Free full-card TrackMaster past performances for The Meadowlands are available by visiting the track’s website here.