Plainridge Feature To Only Passing Thru

Overcoming a slow start and trailing early, Only Passing Thru got it in gear past the half and scored a gutsy victory in a tight finish in the $16,000 Winners-Over trot at Plainridge Park on Thursday afternoon (November 1).

Atlantic Crest (Sergio Corona) was the early pace setter and took the bunch to the quarter in :28 and the half in :57.4. Just as they passed that second station, Shorething Fashion (Nick Graffam), who was leading a three-horse outer flow, went by Atlantic Crest and took control. With the field tightening as they headed up the backside, Swancredit (Drew Campbell) was getting closer but Only Passing Thru (Patrizio Ancora) was getting impatient.

Approaching the three-quarter pole Ancora tipped Only Passing Thru three-deep from fifth and started motoring around stalling horses. At the top of the stretch Shorething Fashion and Only Passing Thru were side by side and trotting in sync. They battled all the way to the wire with Only Passing Thru getting a head advantage to win in 1:56. 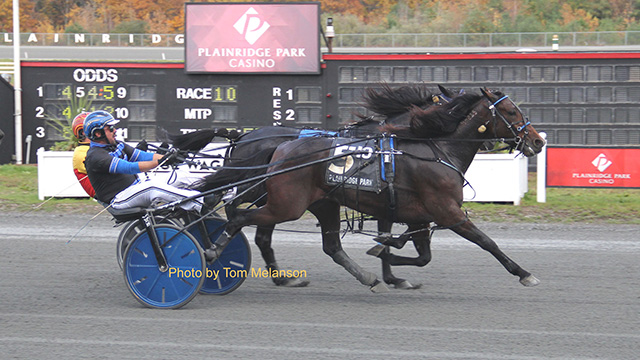 It was the fifth win of the year for Only Passing Thru ($3.80) and it pushed his earnings to $5,234 in 2018 for owner Lindy Farms of Connecticut and Robert Rudolph. Domenico Cecere trains the winner.

In the $12,000 trotting co-feature Quicksilver Kemp (Jim Tomaso) watched from far back as four horses battled early, then tipped out from seventh for the drive at the head of the lane and closed like a bullet to win by two lengths going away in 1:57.1.

It was also the fifth win of the year for Quicksilver Kemp ($4.80) who is owned and trained by Joel Wheeler.

Nick Graffam led all drivers on Thursday with three wins on the card.

Plainridge Park Casino sponsored a fund raiser to benefit the Ellie Fund, which is a Boston-based advocate for breast cancer care. The track's management was on hand to present a cheque for $7,000 to this very worthy organization. 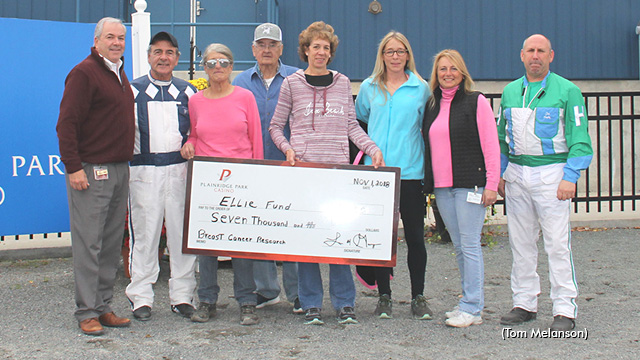 (with files from Plainridge)