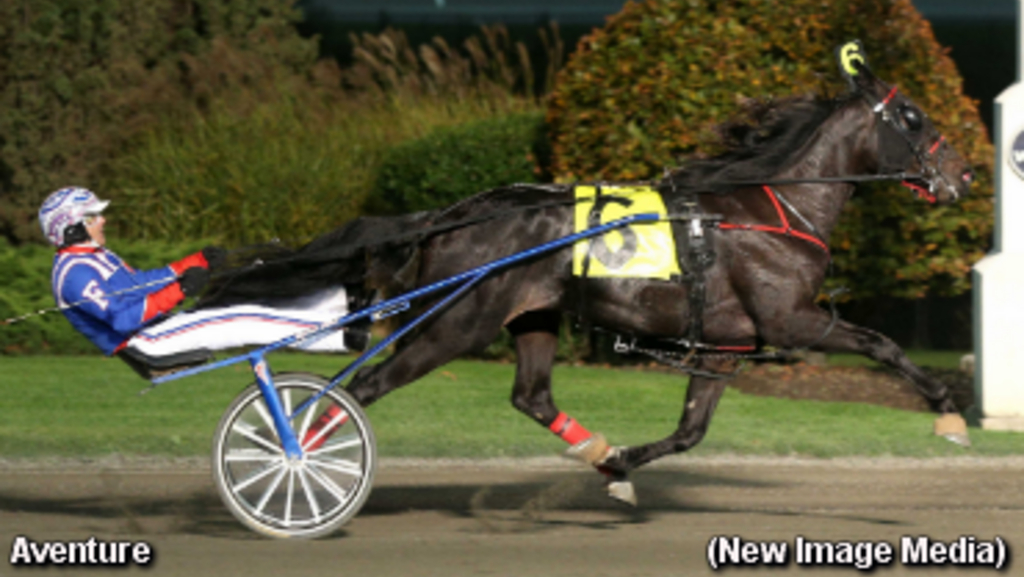 The second leg of the Autumn Series for two-year-old colts and geldings went postward Friday evening at Woodbine Racetrack, with three divisions for pacers and a set for their trotting counterparts.

Aventure, who cruised to a 1:57.4 victory in the opening leg of the series on week ago, steamrolled over the foes he faced in Friday’s first division for the trotters. The son of Muscle Mass-Linas Lottery got away third before brushing to the front at the mid-way point for driver Sylvain Filion. Once they cleared to the top it was game over. The gelding hit the three-quarter pole in 1:28.2 before using a :29.1 closing panel to win by 3-1/4 lengths over Theresademoninme in 1:57.3. Kremlin rallied to finish third.

Bill Budd trains the freshman for owner Orville Rursch of Taylor Ridge, Illinois. The win improves the trotter’s record to 3-2-1 in 11 starts and his share of the $12,000 purse helped boost his bank account in excess of $24,000.

Hitchin A Ride, who was sent off as the 1-9 favourite in the second division, put smiles on a lot of faces when he came through as the odds-on choice in his assignment. Jack Moiseyev got away second with the colt before moving him to the front in the backstretch. Once on the lead, the son of Angus Hall-B Cor Peatra threw down middle splits of :58.2 and 1:27.4 before using a :30.3 closing frame to seal the deal in 1:58.2. It was 2-1/2 length back to runner-up Wire Me Cash. Yoooukilis rallied from last to finish third.

Tom Durand trains the homebred for partners June Durand, Allan Smith, Catherine Baker and Lynn Baker. His share of the purse lifted his lifetime earnings to $33,428.

Major Starlight won the first of three divisions for the two-year-old pacing colts and geldings, and he did so in an impressive manner for the tandem of driver Paul MacDonell and trainer Allen Tomlinson.

The son of Major In Art-Starlight Justice enjoyed a ground-saving trip while sitting third and fourth throughout points of the mile while Waco Bruiser and Pop Pop Joe took turns on the lead through fractions of :26.4, :55.4 and 1:25.2. MacDonell angled to the outside in the lane with Major Starlight, and the gelding fired home in :28.3 to win by 1-1/2 lengths over Vegas Rich in 1:54.3. Even-money favourite Pop Pop Joe weakened late and settled for third.

Major Starlight now owns a 2-1-2 record from 11 starts this season for Tomlinson and partner Thomas Phillips of Romulus, Michigan. The homebred bumped his cash stash to $19,155 with the tally.

Allstar Seelster, who pulled off a narrow in 1:53.2 in the first leg of the series, was a much-the-best winner in his second leg assignment for driver Mike Saftic and trainer Jack Darling. The colt led the group to the quarter pole in :28 before releasing Brodys Scrapper to the front. Allstar Seelster came right back around that foe and reclaimed command. Middle panels of :57 and 1:25.2 were chopped out by the 4-5 favourite who then stepped home in :28.4 to win by 1-3/4 lengths over Brodys Scrapper in 1:54.1. Royal Ashton took home the show dough.

Prince Clyde disappointed when sent off as the favourite in last week’s opening leg of the series, but he bounced back with an impressive 1:53 score in tonight’s second leg assignment for trainer Anthony Montini.

Keith Oliver got away fourth with the colt, but he brushed him to the front in the second quarter. He had the lead at the half in :56.2, but Shadios muscled to the lead and led the field to the three-quarter marker in 1:24.2. Oliver was back out and driving with Prince Clyde in the lane, and the son of Camluck-Tymal Princess used a :28.2 closing frame to prevail by 1-3/4 lengths over a late-closing King Royalty. Shadios faded to finish third.

Anthony Montini trains the pacer for Holland Racing Stable of Aurora and Albina Montini of Acton, Ontario. The rookie now owns a 4-2-2 record from 11 tries, and he’s managed to bank in excess of $38,000 in the process.

The finals of the Autumn Series will be contested next Friday evening at Woodbine Racetrack.