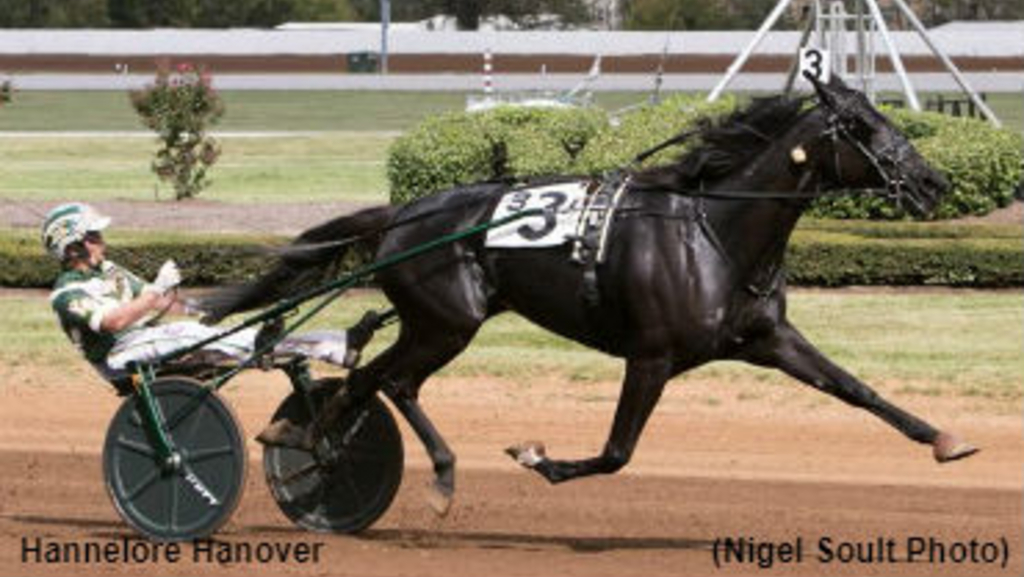 Worlds records and new lifetime marks were the order of the day as The Red Mile in Lexington, KY was buzzing during Saturday's Grand Circuit action.

Here's what took place over the course of the afternoon card:

Hannelore Hanover turned in a breathtaking performance when she blazed over The Red Mile oval in 1:49.2 to become the fastest trotting female in the history of the sport.

Yannick Gingras, who indicated the mare was racing barefoot for the first time, got away third behind I Know My Chip who roared to the lead and carved out first half fractions of :25.3 and :53.2. Crazy Wow popped the pocket going into the final turn and Gingras was quick to follow with Hannelore Hanover. Crazy Wow hit the three-quarter pole in 1:22.3, but Hannelore Hanover blew by in the lane and drew clear to win by a comfortable margin over Homicide Hunter and Pinkman.

“Around the last turn they were still trotting pretty strongly,” said Gingras. “But she felt so strong in the lines. We took her shoes off for the first time, and she definitely took to that. I knew she’d come a huge quarter. I had good horses behind me, but when she’s on her game - I’ve said this all along - she’s the best in North America.

“Coming to the wire, I knew I was going under [1]:50," he added. "I was just waiting to see where the clock was going to stop, but [1]:49.2 is definitely a great achievement for this mare. She definitely deserves it.”

Ron Burke trains the five-year-old daughter of Swan For All-High Sobriety for his Burke Racing Stable LLC, Weaver Bruscemi LLC, Frank Baldachino and J And T Silva Stables LLC. It was the mare’s seventh win of the season and the 33rd of her career. The victory bumped her career bankroll to $2,262,894.

Dealt A Winner sizzled to a new lifetime mark of 1:47.3 for driver David Miller and trainer Mark Silva, and in doing so the pacer inched closer to becoming racing’s newest millionaire.

Miller dropped his charge into the five-hole early while Check Six blitzed through first-half fractions of :27 and :53.1. Miller moved Dealt A Winner first-over as the field headed into the final turn, and he quickly pressed his way to the lead at the three-quarter pole in 1:20. A :27.3 closing panel sealed the deal for the speedster who stopped the teletimer in 1:47.3 while defeating Mcwicked and Mel Mara.

The five-year-old son of Cams Card Shark-Lazan Hanover improved his 2017 record to 4-2-1 from 15 starts with the win. The 14-time winner, who is owned by Jeffrey Snyder of New York, pushed his lifetime earnings to $977,781 in the process.

Miswave Hanover had loads of pace to chase in her Saturday afternoon assignment, and when driver Marcus Miller called on her to go on the offensive she had no problem collaring the leg-tired leader and then drawing away from that foe and the others in 1:51.2.

Miller watched Ana Hanover steamroll through vicious fractions of :27, :53.1 and 1:21.3 before fatigue set in. Miller and Miswave Hanover kicked into gear late and had more than enough in reserve to rally to the 1:51.2 score over Majorsspeciallady and KJs Bekah.

It was a career-best performance for the $20,000 purchase from last year’s Harrisburg Yearling Sale, who is owned by Nick Surick Stable LLC, Ervin Miller Stable Inc and Hannah Miller. The daughter of Somebeachsomewhere-Maremma Hanover now owns a 2-0-1 record from seven starts and a cash stash of $40,850.

Youaremycandygirl was treated to a perfect trip by driver Yannick Gingras, and the filly parlayed that trip into an eye-catching victory in a world record clocking of 1:50.

Youaremycandygirl sprinted to the lead and supplied the field with an opening quarter in :27.3, but she was overtaken in the backstretch by Rainbow Room. That filly marched the group through middle panels of :55.1 and 1:22.2, but she couldn’t fend off Youaremycandygirl in the lane. Youaremycandygirl surged past the leader and beat that foe in 1:50. Baron Remy grabbed the show dough.

Kissin In The Sand was an overwhelming favourite, and she didn’t disappoint the army of backers that watched her go down the road in 1:51 for driver Yannick Gingras.

Nancy Johansson trains the daughter of Somebeachsomewhere-Kiss Me Kate for owners Marvin Katz of Toronto, Ont. and Hatfield Stables of Columbus, OH. Purchased for $130,000 at last year’s Harrisburg Yearling Sale, Kissin In The Sand improved her rookie record to 5-1-1 from 10 starts with the win. Her share of the purse boosted her earnings $158,038.

Hayden Hanover muscled to the lead for driver Andy Miller and carved out fractions of :27.4, :55.3 and 1:23 before kicking home in :27 to hold on for the narrow win in 1:50 over race favourite This Is The Plan. Shadow Cat took home third prize.

It was the second lifetime win for the son of Somebeachsomewhere-Hanover, who hangs his harness bag in the barn of trainer Julie Miller. Purchased for $85,000 at last year’s Harrisburg Yearling Sale, the youngster improved his record to 2-4-3 from 10 trips postward. Pinske Stables and Jim Simpson share ownership on the winner of $323,840.

Karpathian Kid enjoyed a two-hole trip for the majority of his Saturday afternoon assignment, and it clearly came in handy when driver David Miller pulled the trigger on the rookie in the lane.

Karpathian Kid and Babes Dig Me battled past the quarter pole in :27.2 before the latter cleared to the top. Babes Dig Me then rolled through middle fractions of :55 and 1:22.1, but he wasn’t able to seal the deal. Miller popped off the rail and guided Karpathian Kid to the 1:50.1 score over Babes Dig Me and
Wes Delight.

Erv Miller trains the homebred son of Somebeachsomewhere-Vysoke Tatry for driver David Miller, Lawrence Means and the Prushnoks, David and John. It was third win of the season for the freshman who owns a 3-4-1 record from nine starts. The lion’s share of the purse bumped his bankroll to $122,942.

Heavily favoured Nutcracker Sweet rallied to the lead in the lane and drew clear to win in a career-best clocking of 1:50.2 for driver Tim Tetrick.

The Jimmy Takter-trained son of Bettors Delight-Sweet Future improved his freshman record to 4-2-1 from nine tries with the win. The $150,000 purchase from last year’s Harrisburg Yearling Sale has now stashed away earnings of $116,530 for owners Howard Taylor, Order By Stable and Richard Lombardo.

Fresh off his win in the Metro, Lost In Time trekked to Lexington and trounced the competition in 1:50.4 for driver Scott Zeron.

The son of A Rocknroll Dance-Summer Mystery tucked into the pocket in the early stages while Im A Big Deal marched to the top and led the field past the first quarter in :28.1. Zeron popped the pocket in the backstretch, and Lost In Time cleared to the top with relative ease. He whizzed through middle panels of :56 and 1:24.3 before rocketing home in :26.1 to win in going away fashion over Im A Big Deal and Twin B Tuffenuff in 1:50.4.

(With quotes from The Red Mile)