Check Me Out Cruises In Kentucky 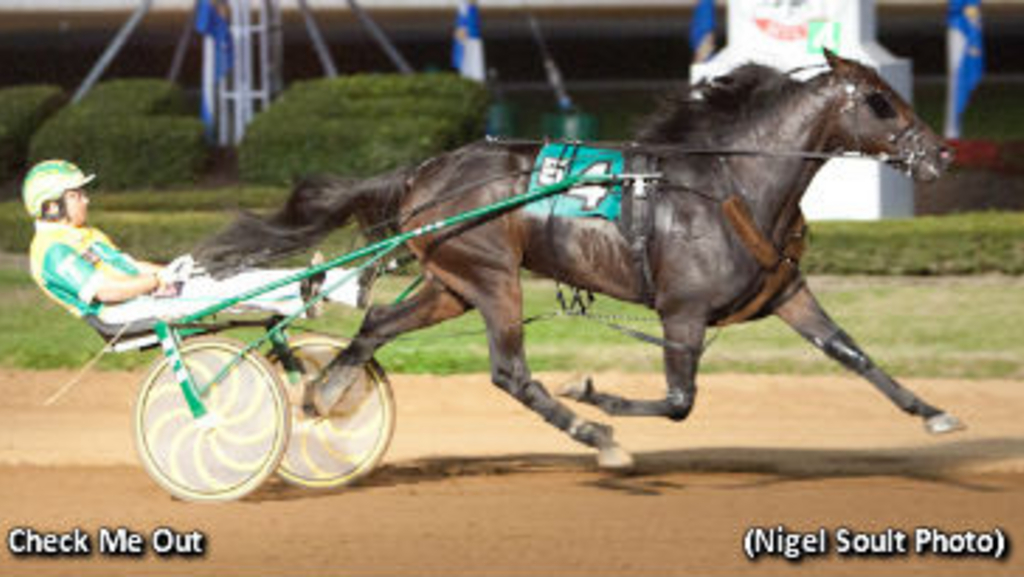 Check Me Out was a thoroughly dominant winner in a division of the Bluegrass Series last week at The Red Mile, and she was just as dominant over that oval in Thursday evening's International Stallion Stakes

With Tim Tetrick at the helm, Check Me Out tucked into an early three-hole while Feel The Pressure supplied the field with an opening quarter in a :29-second clip. Tetrick brushed his charge to the top as they entered the backstretch, and in a matter of strides they became the leaders. Middle panels of :57.3 and 1:26 were chopped out by the Ray Schnittker trainee, and she tacked on a :27.4 final frame to win by open lengths. Uncommon Night was next best, with Lady Andi taking home third prize in the $93,000 tilt.

Schnittker shares ownership on the daughter of Donato Hanover-Illusion Bi, who was sent off as the 1-9 favourite, with Charles Iannazzo of Tappan, NY. The victory improved her rookie record to 10-2-0 in 12 starts, and the winner’s share of the purse boosted her bankroll to $510,858.

Personal Style pulled off a 48-1 shocker in the next $93,000 division, and that was music to the ears of driver David Miller and trainer Richard ‘Nifty’ Norman. Miller treated Personal Style to a ground-saving trip behind Oasis Dream, who led the field through fractions of :28.1, :57 and 1:26.2. Still sitting fourth at the head of the lane, Miller swung out wide with Personal Style and the filly kicked home strongest of them all to win in 1:55.3. Chilitodayhotamale was second best, with Real Babe taking home the show dough.

The victory was the second of the season in six tries for the daughter of Yankee Glide-Foxy Victory. She improved her record to 2-1-1 for the partnership of Brittany Farms of Versailles, KY and Mel Hartman of Ottawa, ON. She has banked $66,450 to date.

Win Missy B marched to the top and didn’t look back in the final division, winning in a time of 1:55 for the tandem of driver Brian Sears and trainer Charlie Norris. The Conway Hall-Winning Missbrenda homebred stepped through fractions of :29.4, :58.1 and 1:27 before sprinting home in a :28-second clip to defeat Aunt Mel and On The Bright Side.

Sent off as the 1-5 favourite, Win Missy B improved her juvenile record to 6-2-0 in 10 starts for owner/breeder Bob Key of Leechburg, PA. The lion’s share of the purse lifted her earnings to $384,055.