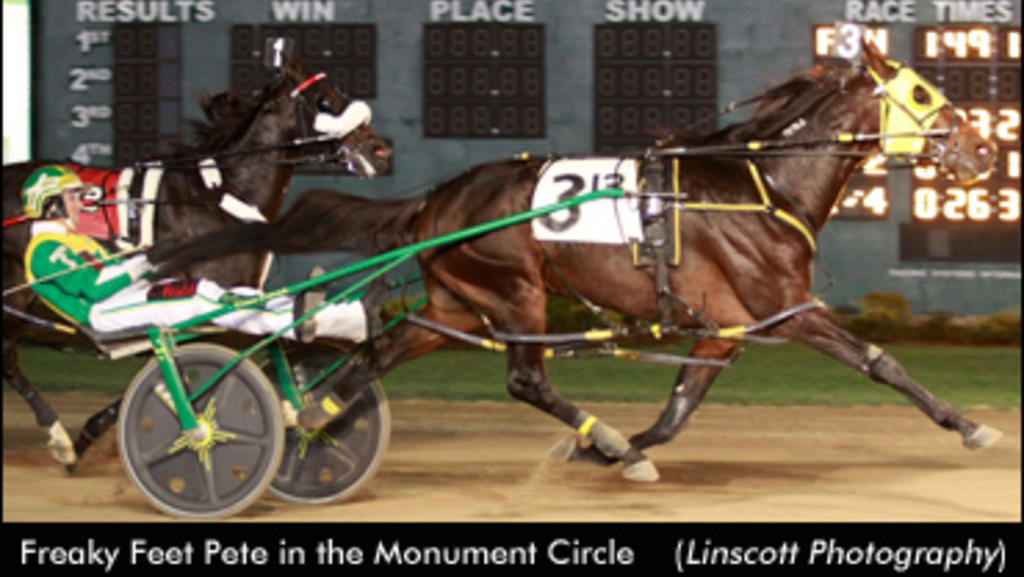 The favourites controlled the race with Wiggle It Jiggleit and driver Montrell Teague leading after an inside start and Freaky Feet Pete dropping into the two-hole from post three for Trace Tetrick. They remained one-two through fractions of :26.3, :55.1 and 1:23.2 before their stretch showdown.

Tetrick pulled Freaky Feet Pete from the pocket turning for home and began to reel in the leader down the lane. With the wire approaching, Freaky Feet Pete eventually swept by his rival to score the 1:49.3 triumph. Wiggle It Jiggleit settled for the runner-up honours tonight, finishing just over one length behind. My Hero Ron (Yannick Gingras) edged out Lost For Words (David Miller) in a photo for show.

"I got the trip I wanted, probably the trip I needed," said Tetrick in the winner's circle. "It's hard to come off the pace very far to beat Montrell's horse. They're two great horses; it was a great race."

This was the third time Freaky Feet Pete faced Wiggle It Jiggleit and the second time he won -- the last time he defeated his rival was in the Indiana Super Final on Oct. 10 off a similar pocket trip.

"I know Montrell's horse was a little sharper today...It took mine a minute to get pacing full tilt, but he got home fast and the last eighth, the horse, 'Freaky,' just kept pacing hard to the wire."

Both three-year-olds were coming into the Monument Circle off victories -- Wiggle It Jiggleit won a division of the Circle City last week at Hoosier while Freaky Feet Pete earned his first victory outside his home state at the Breeders Crown on Oct. 24 in Canada at Woodbine Racetrack.

"You watch the Breeders Crown, you think about it, but you never think you're going to participate in it," said trainer Larry Rheinheimer.

In his quick return to his home turf, Freaky Feet Pete notched the 14th win of his 16-race sophomore season.

"I was pretty confident," said Rheinheimer of Freaky Feet Pete racing back in six days. "I had a little concern, but I felt that he needed to come back."

The homebred Rockin Image colt enjoyed a near-perfect freshman campaign, winning nine of his 10 Indiana races and earning $261,950. He has progressed to tackle Grand Circuit horses this year, and it's been a dream come true for his connections, including owners Mary Jo Rheinheimer of La Grange, Indiana and Marty Rheinheimer of Howe, Indiana.

"Since his first start as a baby, a switch just went off in his head and he's been good ever since," said Tetrick of the colt's progression. "Now he's versatile, he likes his job and he likes to go fast."

"He's done something for my lifetime and something I've [dreamed] about, and here we are on top of the world!" smiled Rheinheimer.

One race earlier, fan favourite Foiled Again added to his record bankroll with a wire-to-wire victory in the $165,000 Hoosier Park Pacing Derby for free-for-allers.

With the inside post advantage, Foiled Again and his regular partner, Yannick Gingras, established the lead and had his five foes -- including three stablemates -- lined up in behind by the first turn. All Bets Off (Matt Kakaley) followed in second with the Jimmy Takter-trained Jk Endofanera (Brett Miller) tucking into the three-hole early on.

Foiled Again carved out fractions of :27.3, :56.1 and 1:24 and remained clear on top turning for home despite favourite JK Endofanera's first over advances. JK Endofanera continued to close in on the the $7 million horse down the stretch though while All Bets Off came through along the inside to make it a close finish. However, Foiled Again held on by a quarter-length to score his 86th career win in 1:50.3. JK Endofanera finished second over All Bets Off.

"Every time he steps on the racetrack you know he's going to give 150 percent effort," said Gingras in a post-race interview. "It's been a pleasure, a great ride."

"I thought I had a great chance," said Gingras. "I love the rail, I wanted to control the race -- that was my plan anyway. It usually doesn't work out that way, but that's what I wanted to do. When you're on the front and you can put the bit in his mouth and let him swell up, he's usually tough to pass.

"Around the last turn, I thought he'd win. He usually tells you right around the five-eighths how he feels."

Crazy Wow wore down 1-5 favourite Pinkman and then held off the local undefeated sophomore Homicide Hunter to win the $270,000 Carl Erskine for three-year-old male trotters.

Pinkman (Yannick Gingras) established the lead off the gate from post four over his stablemate Uncle Lasse (Jimmy Takter). The Takter trainees remained one-two through a :27.2 opening quarter with Homicide Hunter (John De Long), sporting a 16-for-16 sophomore record, following in third-place and the Ron Burke-trained Crazy Wow positioned fourth by Tim Tetrick.

As the trotters headed to the half in :57, Tetrick made his move with Crazy Wow. Pinkman continued to lead past three-quarters in 1:25.3 with Crazy Wow applying first over pressure. As those two battled down the stretch, Crazy Wow gained a slight advantage and then drew one length clear to score the 1:54 victory, with Homicide Hunter rallying outside to finish second. Pinkman held on in a photo for show.

"I tried to get in play the best I could. I knew the two Takter horses were going to try to control it," said Tetrick after the race. "My horse has been good all year. He got really beat up in the Futurity, but he bounced back really good. He's a real horse.

"Today, he showed some toughness being first up a long way and he fought through the stretch and he won handily. I was really happy with his effort."

Crazy Wow was the 6-1 second choice on the toteboard and paid $15.80 to win. He now has wins in half of his 16 starts this year and is approaching the million-dollar mark for sophomore earnings.

"The only thing we worry about with Crazy Wow is he's not a great shipper so we just hope he makes his travels well and comes in rested," noted assistant trainer Jamie Rucker, who said the Crazed colt will skip the American National and compete in the Matron Stakes next.

Muscle Baby Doll persevered in another stretch duel on the stakes card over Bright Baby Blues to win the $140,000 Crossroads Of America for three-year-old trotting fillies.

Fresh off a 1:53.1 track record performance at the Indiana oval last week in the Circle City, Muscle Baby Doll delivered as the 1-2 favourite in Friday's affair with David Miller aboard.

There was lots of action early on as Churita (Trace Tetrick) was the quickest off the gate, but gave way to the oncoming Bright Baby Blues (Tim Tetrick) into a :27.3 first quarter. Her lead was short-lived though as the parked out Speak To Me (Brett Miller) worked to the top and then Muscle Baby Doll cleared at the half-mile mark in :56.1.

Muscle Baby Doll proceeded to three-quarters in 1:25.1, when Bright Baby Blues tipped back out and launched her late attack. Those two fillies battled head-to-head for the length of the stretch with Muscle Baby Doll fighting back at the wire to prevail by a neck in 1:54.2. Speak To Me finished third.

Muscle Baby Doll has now won 10 of her 14 races this year, including her last two at Hoosier in trainer Trent Stohler's care. The daughter of Muscle Mass is owned by F. Bellino And Sons LLC of Bronxville, New York.

On the eve of Halloween, Devil Child earned her richest win to date as she overpowered her rivals to take the $101,000 USS Indianapolis Memorial for three-year-old pacing fillies in track record time.

Sassa Hanover led the fillies through middle splits of :55.2 and 1:23 while Rockin Good (Jared Finn) launched a non-threatening first over attack from sixth.

As the field turned for home, Tetrick let Devil Child loose and she overtook Sassa Hanover and drew three lengths clear to win in 1:50.3, lowering Galleria's long-standing track record for three-year-old pacing fillies. Devil Child shaved one-fifth of a second off the former record that was set in 1998. Sassa Hanover stayed for second and Southwind Roulette followed in third.

Devil Child earned her sixth win of the season from 20 starts. She is owned by Susan Oakes of Wilkes-Barre, Pennsylvania and Crawford Farms LLC of Syracuse, New York.

The second annual East Meets Midwest Drivers' Challenge was also held earlier on the card spanning five races, with the home team from the Midwest earning the most points to secure the victory.

The Midwest team earned a total of 165 points and ended the challenge with a 29-point lead over team East, which included John Campbell, David Miller, Tim Tetrick, Yannick Gingras and Scott Zeron.

"They did crush us last year," laughed Widger. "But whatever we drew, we had some good horses. We drew some good posts and had some good trips, and it's a lot of fun beating them guys, they're tough."