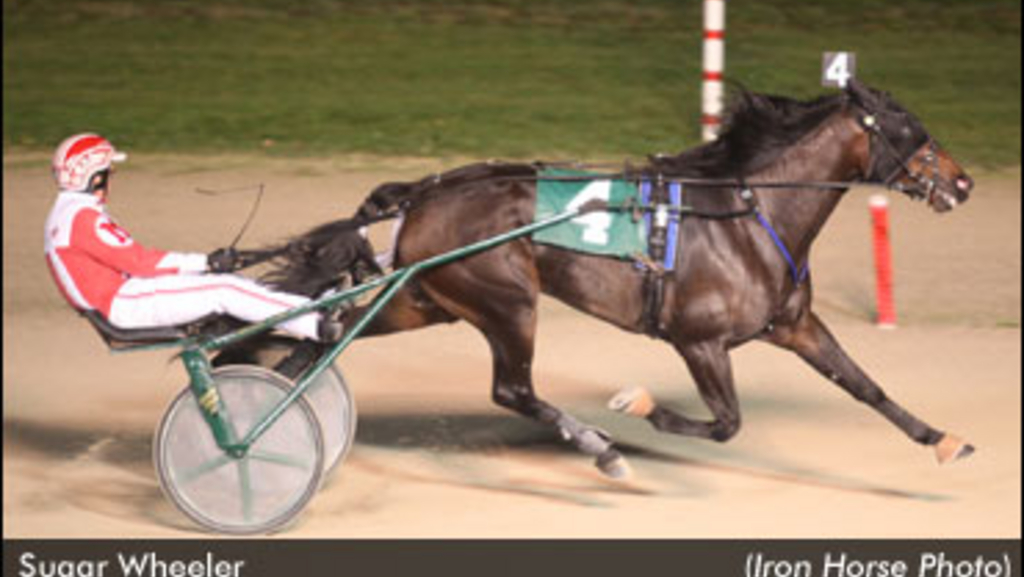 Sugar Wheeler lowered the divisional track record, which was set by Friendly Amigo in 2009, by three-fifths of a second with her Wednesday wire-to-wire victory.

Driver Paul MacDonell fired Sugar Wheeler to command from post four in the five-horse field and carved out fractions of :29, :59.2 and 1:28.1 before pulling away from her foes to win by three lengths. Magic Lindy (James MacDonald) followed in the pocket spot for second while One More Ginny (Mario Baillargeon) rallied off cover to show and first over Lexus Helios (Mike Saftic) ended up fourth.

"She was exceptionally strong tonight," said MacDonell, who recently surpassed the 5,000-win mark. "She's built for a half-mile track. She just gets around the turns so nicely. Everything was to her liking tonight so here we are."

Sugar Wheeler sits second in the divisional OSS standings behind Miss Paris -- the other fifth round Gold Series elimination winner -- after finishing second to that filly in three earlier Gold Finals.

Miss Paris survived a first over journey earlier in the night to win her elimination in 1:57.2 with Rick Zeron in the sulky for trainer Richard 'Nifty' Norman.

Miss Paris got away fourth from post three in the five-horse field during a :29.1 opening quarter and advanced first up at the 1:00.1 halfway point. The overwhelming 1-9 favourite applied heavy pressure to the leading Daylon Miracle (Dave Wall) before drawing even with that filly past the 1:29.2 third quarter station and sweeping by in the stretch to score. Pocket-sitter Smarty Pants (Scott Zeron) zipped up the pylons for second forcing the pacesetter to settle for third. Justasmalltowngirl (Anthony MacDonald) finished fourth.

The daughter of Kadabra-Pizza Dolce managed to come close to the original track record despite hitting her race bike down the backstretch.

"As she starts to stride out she'll hit the bike once in awhile," noted Zeron after the race. "I didn't have my bike here tonight so we used 'Nifty's bike and she was hitting it pretty good on the inside."

In regular racing action, MacDonell also guided OSS graduate Define The World to a 1:56.3 half-length score over pacesetter Stormont Lancelot in the $11,000 Preferred 2 Handicap Trot. The seven-year-old son of Duke Of York is now two-for-two after a 10-month long layoff for trainer John Bax and owner-breeder Al Libfeld of Pickering, Ont.

The field for next week's $130,000 Gold Final will line up in the following post position order: