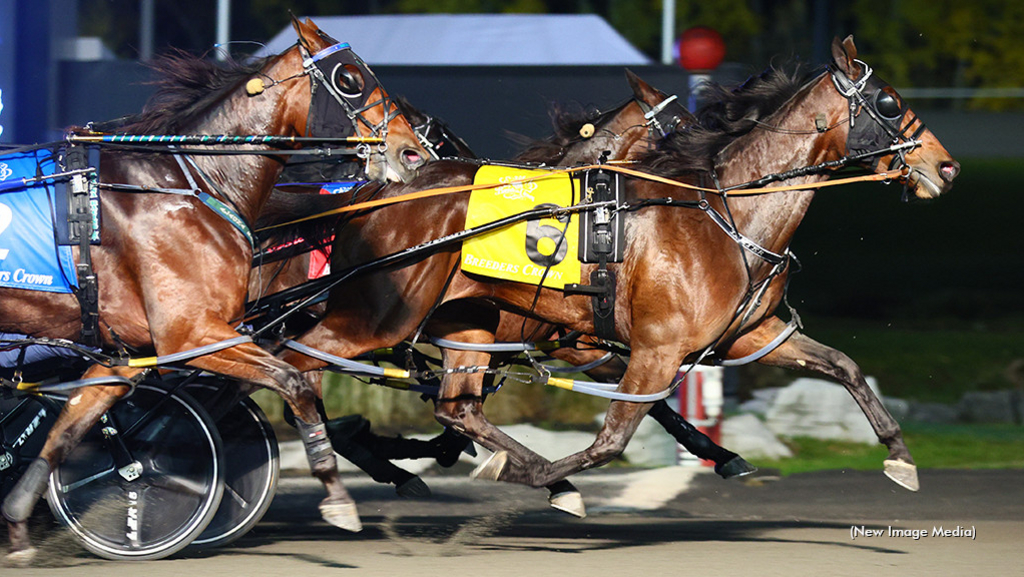 With Scott Zeron at the controls, Treacherous Dragon was on top at the quick :26 second opener. Niki Hill, parked from the start from post 10, came calling but Zeron was reluctant to give up the lead too quickly. Dexter Dunn and Niki Hill cleared by the :54.1 half.

Niki Hill, who was making just her fifth sophomore start, paced by the three-quarters in 1:22 but had company all around her down the stretch. In a close finish, Zeron threaded the needle to get Treacherous Dragon to the wire first in 1:49.1, a neck in front of a game Niki Hill, who won the Breeders Crown final last year at two. Boudoir Hanover was third for Todd McCarthy with the two stablemates from the Nick Gallucci barn, Silver Label and Prohibition Legal, next across.

The win was the ninth in 14 attempts this year for Treacherous Dragon, who came into the contest having swept the coveted Jugette last month at Delaware. A daughter of Captaintreacherous from the multiple Breeders Crown winner My Little Dragon, Treacherous Dragon earned millionaire status with the win. Nancy Taker trains for Hot Lead Farm of New Jersey.

“I actually thought she was the filly to beat,” said Nancy Takter. “She’s been super since the Jugette. Since we put her on Lasix, she’s been a different horse. She’s been on the bit and ready to go to work. I thought she had a very big shot tonight.

“She likes to pass horses and it was just a matter of finding room down the stretch and I'm happy that Scotty found it. I was getting a little worried there, I didn’t think we were going to win. I don’t think I’ve screamed that loud on a race, ever. She’s a nice big sized filly, she’s going to race next year and hopefully she’s got a bright future.”

Zeron, a former regular on the Woodbine circuit, didn’t even expect to be competing in this year’s Breeders Crown after suffering breaks in his pelvis and wrist following an accident at the end of July at Pocono.

“Honestly, I didn’t even think I’d be here; when I was injured I kind of gave up the dream of making it to this year’s Breeders Crown. A couple of people pushed me to do it -- Mark MacDonald and Nancy -- and I’m happy I did it and obviously it’s a great win,” said Zeron, who just returned to the bike a few weeks ago.

As for the trip, he noted: “I felt great, just to have the opportunity to race late in the mile. Looking on paper I dreamed of following Niki Hill and it came to fruition. I didn’t have a lot of room and when I did she’s an exceptional filly to sprint up into gear with 100 feet left.

“It’s not a bad phone call when they ask you to drive the current Jugette winner,” he laughed.

Saturday's victory was the eighth Breeders Crown final for Takter and second for her in this division with a filly bred by White Birch Farm having won in 2020 with Peaky Sneaky.

For complete coverage of the 2022 Breeders Crown championships, click here.