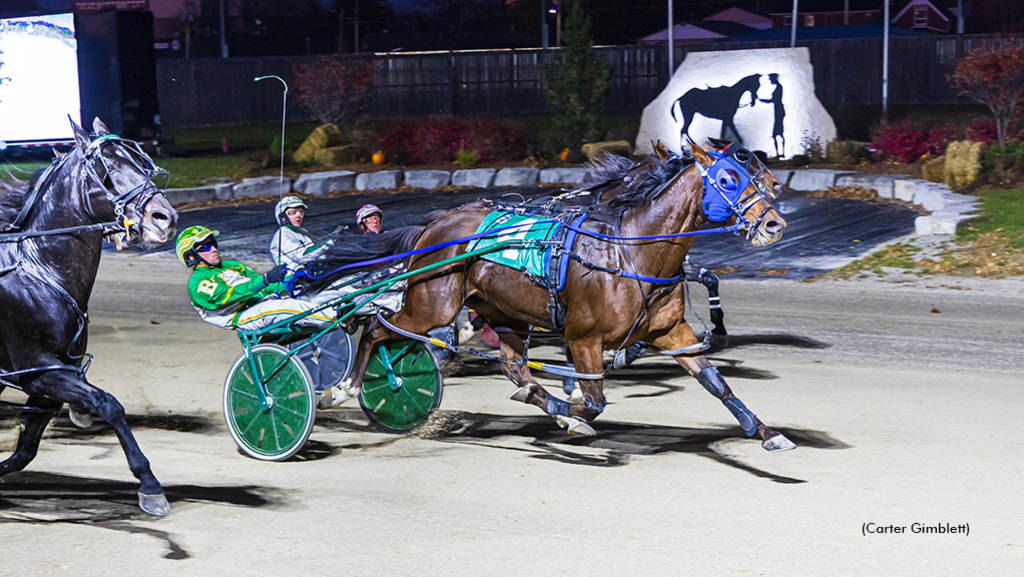 Night Watchman prevailed in a five-across finish to take the $13,000 Preferred Handicap Pace featured on Friday night (Oct. 28) at The Raceway at Western Fair District.

Night Watchman got the first call firing off the gate from post four for driver Nick Boyd but 3-2 bettors' choice Cheddar Bay (J Harris), leaving just to his outside, charged to command through a sizzling :26.4 opening quarter. The favourite stole a second quarter breather to the half in  :57 and rebuffed a first-over challenge from Choreographer (Scott Coulter) through three-quarters in 1:26.1. However, Night Watchman popped the pocket at the top of the lane and defeated Cheddar Bay by half a length in 1:55.4, with Homey Joe (Paul MacKenzie) closing widest of all from the backfield and Prestige Seelster (Dan Clements) slipping up the passing lane to just miss place. Trailing tier starter So Frisky (Colin Kelly) rounded out the top five between rivals.

Night Watchman returned $13.10 at the betting windows as he picked up the fifth win of his five-year-old campaign and lifted his seasonal earnings to $41,510 from 27 starts. A 13-time career winner, the homebred Hes Watching gelding is owned by trainer Craig Barss and Nurko Sokolovic of Waterloo, Ont.

While Night Watchman stole the show in the feature race, the driving star of the night was Tyler Borth with five wins.

Borth struck early with the streaking sophomore pacing filly J One Twenty ($2.10) for trainer Jerry Sims but dominated the back-half of the 11-race program.

Among four straight wins, he doubled up for the Darryl Laver stable with Kempenfelt ($21.40) upsetting the bettors' chocie by a neck and Rosella ($3.20) then delivering as the favourite. Borth also won with Stop And Search ($13.20) for trainer Mike Timpano and Rye N Clyne ($4.60) for conditioner Cameron McQueen.

The 29-year-old Ingersoll, Ont. reinsman is currently in the midst of a career-best season with 259 wins -- ranking top five in Canada -- and more than $1.7 million in purse earnings. Of those wins, Borth has earned 112 at Western Fair to lead the driving colony in 2022.