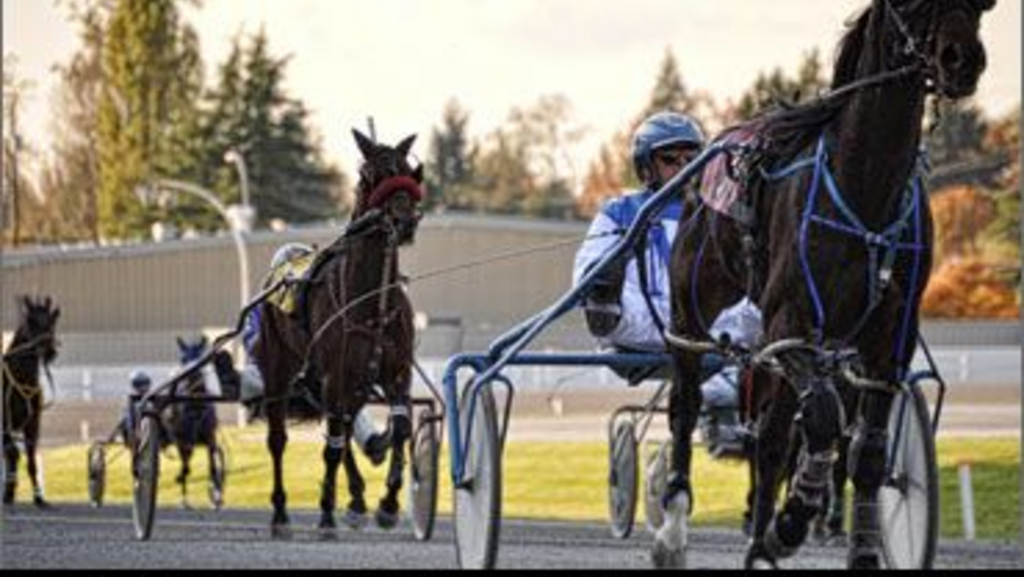 A pair of fourth-leg divisions (Race 1 and 2) of the Robert Murphy got the afternoon program underway, as the three-year-old male pacers took to the track.

The first of the divisions (Race 1) saw the Heather Sifert-trained and Carl Sibiga-driven Solongo ($34.80), who was the second-longest shot on the board (16-1), race bravely from off the pace and get up for a two-length win in a life’s-best 1:55.2. The gelded son of So Surreal started from Post 5 and was fifth through the opening quarter (:27.1) and half mile (:58.2). The bay raced first-up in the third quarter and was battling for the lead at the 1:27.3 three quarters pole. Solongo was on the lead by a length at the head of the stretch and sealed the deal with a :27.4 final quarter. The Jim Marino-driven Ron Bakardi – the post-time choice that had cut the fractions after a Post-1 start – finished second. The Kevin Anderson-driven One Small Favour, who had started from Post 2 and took a two-hole ride through the fractions, finished third, three lengths in arrears of the victor. After having gone unraced as a freshman, Solongo has now won three of his 12 starts, finished on the board eight times, and banked over $30,000. Heather Sifert, of Blaine, Washington, owns Solongo.

The second of the Murphy splits (Race 2) saw the Rod Therres-trained and driven Canadian Pharoh ($2.10), who was hammered down to five cents on the dollar, start from Post 3, take a two-hole ride through the fractions (:27.3, :57.4, 1:26), and get up for a three-quarters-of-one-length win in a life’s-best 1:55.1. Proberts Legacy (Preston Shaw), who had cut all of the fractions after a Post 5 start, just got beat and finished second. Post 2 starter ACBC (Glenn White) raced third through the mile and finished third by more than six lengths. Therres, of Langley, B.C., owns Canadian Pharoh along with fellow breeder Veikko Pajunen (Vancouver, B.C.). The Mach Three gelding has now won four of his 14 starts this season and more than $66,000 in 2018 purses. He has now won seven of his 20 career races and over $128,000 in purses.

The Millbank action then followed in Race 3 and 4, as the two-year-old fillies took their turn in their respective fourth-leg divisions.

The first of the Millbank splits (Race 3) saw the Jim Marino-trained and Paul Davies-driven favourite Mrs Suhwiggins ($3.20) start from Post 5, cut all of the fractions (:29.1, :59.1, 1:29) and go on to record a three-quarters-of-one-length victory in 1:58.1. After a Post 2 start, Tough It Out (John Chappell) paced a pocket trip and finished second. The Jim Marino-driven Hotpieceoface started from Post 3, raced third through the mile, and finished third, more than three lengths in arrears of the victor. Mrs Suhwiggins, who is owned by the JJJ Stables of Prince George, B.C., has now won four of her six career starts and has yet to finish worse than second. The bay daughter of Custard The Dragon lowered her career mark with her Sunday win and has now banked over $42,000 in purses.

The second of the Millbank splits (Race 4) saw The Blue Yak ($2.90), who was driven by Serge Masse for trainer John Hudon, pace a gate-to-wire 1:57.1 mile from Post 4. The margin of victory was an expanding three and one-quarter lengths over the Rod Therres-driven Ocean Wind, who had taken a two-hole trip through the fractions (:28.4, :59.2, 1:28.3). The Richard Remillard-driven Raging Chihuahua, who had attempted a first-over attempt in the back half of the mile, finished third, ten lengths behind the victor. The Blue Yak, who is a bay daughter of Big Jim, has now won four of her five career starts and has banked over $30,000 for her trainer/breeder John Hudon, of Surrey, B.C.

The program’s $12,000 Open Pace Handicap followed in Race 5, and it was the favoured Cool Cowboy ($4.40) that held on for a gate-to-wire 1:54 win for trainer/driver Jim Marino. Illwinifican, who took a two-hole trip in the race, finished just a head back in second for pilot Dennis Johnston. The Clint Warrington-driven Bobby Dazzler, who had raced fifth through the fractions (:27.4, :57.2, 1:25.2) kicked home nicely and finished less than two lengths back for third. Cool Cowboy, a six-year-old son of Brandons Cowboy, is owned by JJJ Stables (Prince George, B.C.) and Jim Marino (Surrey, B.C.)