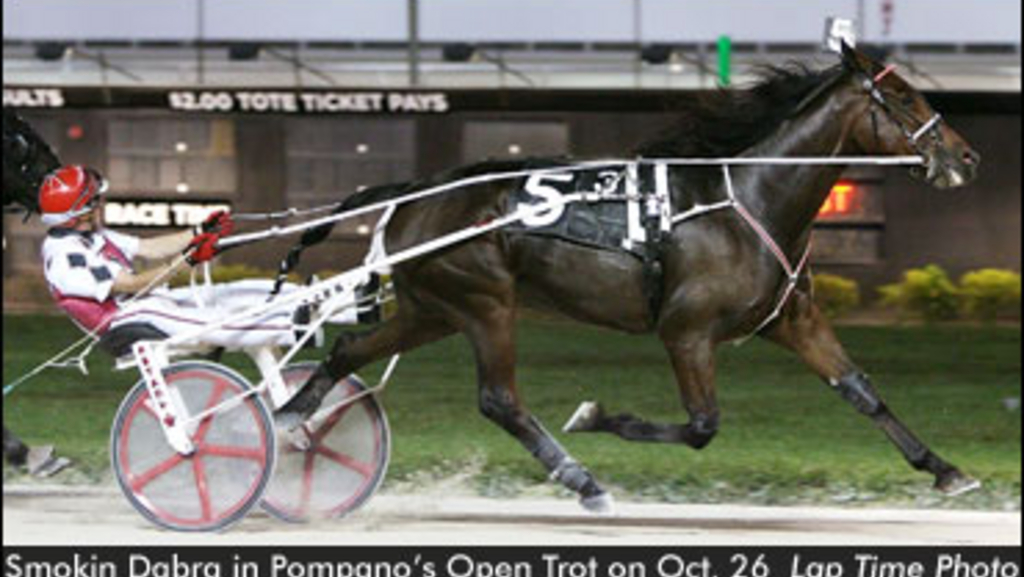 In the $12,000 purse Open Trot on the Wednesday, October 26 program the son of Kadabra-Smokin Rama was a game front end winner, holding off the pocket-sitter Aruba Vacation, in rein to Fern Paquet Jr., and the robust final half first over challenge of Hesgotlegs, driven by Bruce Ranger. Smokin Dabra was parked to the quarter by Aruba Vacation in :27.2 and was then guided through stages of :57.4 and 1:27.1 by Norm Dessereault en route to the victory in 1:56.1 on the ideal 77 degree night at The Isle Casino Racing Pompano Park.

It was the fourth start in Florida for Smokin Dabra, a homebred of John Bosworth of Newmarket, Ont. Noreen Paulin of the Dessereault Stable is handling the training duties. Smokin Dabra went into the October 26 with a pair of runner-up finishes to Keystone Thomas to his credit, and this tally was his ninth win in 30 trips to the gate for 2011 earnings of $67,935.

Just a single engagement now remains for participants in the $1 million Florida Standardbred Breeders And Owners Association (FSBOA) stakes series for 2011. Close to $400,000 in purses will go on the line in the eight championship finals of the Breeders' Stakes on the November 5 Super Night at Pompano.

The Sale Stakes concluded on October 26 with a purse of $20,600 for two-year-old filly trotters. Pinch Of Thyme was sure footed again in victory with a dominant 2:02.1 spin over 80-1 longshot Teal, partnered by Jay Sears, and Feel The Haze, driven by Mike Micallef. Mel Turcotte trains the roan daughter of Basil-Chicory Cinder for owner Fred Morosini of Deerfield Beach, Florida. In eight career starts against state bred competition she's raked in $31,876.

Elimination races were necessary for the Breeders Stakes two-year-old colt and gelding trot division, and a pair of $7,500 non-wagering heats were staged before the mid-week pari-mutuel card. Matcan, a Matchem Hanover-Cans Money Maker gelding, romped home in 2:06.2 with Bruce Ranger in the bike for trainer Stewart Nemiro and owner Fred Monteleone of Pompano Beach. Coconspirator, an Arapa Victory-Blue Time Victory gelding, brushed up late in the stretch to score in 2:07.2 under a ground saving steer from Mickey McNichol for owner-trainer Rita Polese of Margate, Florida.

Horse Count On The Rise

Upcoming race programs from The Winter Capital Of Harness Racing will be featuring more new additions to the training and driving ranks. A contingent of six horses has arrived from California to mark the return to South Florida of trainer-driver Rick Plano. Trainer Chris Marino will send out his first starter of the meet on the Saturday, October 29 program with Keltic Sport from Post 9 in the first race. Returning to the Pompano fold with their first starters on the Wednesday card were the stables of Gaston Glaude along with Elizabeth and Rick Schaut.