Driver Mario Charron was on fire on Sunday as he scored five victories on the day and is now four wins away from catching Denis St Pierre (48 wins) for the 2015 driving title at Hippodrome 3R. 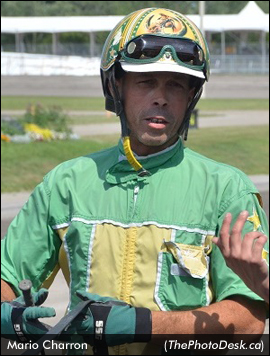 Charron kicked off the card with a victory in the opener aboard Francis Guillemette's maiden-breaking four-year-old pacing mare Twin B Charming ($8.50) and completed a sweep of the early Daily Double with the Sylvain Cote-trained Beauty Road ($11.40). Charron also drove Cliff Drummond ($5.10) to victory lane in the fourth race for the Cote stable. He later won the eighth race with Reel ($23.60) for trainer Maxime Velaye and the 10th race finale with Rene Lizotte's Wind River Cat ($4.80).

Currently, Velaye holds a slim one win lead (19 wins total) over Jean Tourigny, at 18 wins, for the training title going into the final day next Sunday.

In the afternoon's $4,000 feature pace, the Tourigny-trained Pop Goes Theweasel popped for another big harness racing score as the three-year-old filly romped to her third straight victory.

Driven confidently by regular reinsman Louis-Phillipe Roy, Pop Goes Theweasel started from the rail in the third race and got away in second-place as Classic Breeze (Pascal Berube) shot to the early lead from post six. But by the opening quarter-mile in :29.4 on a rain-soaked track with a two second variance, Roy was on the move with Pop Goes Theweasel and the daughter of Mach Three was in command for the rest of the one-mile race.

Roy was able to slow down the pace with Pop Goes Theweasel to the half-mile in 1:01.4 as Monster Magic (Steeven Genois) came first-over with Bemmol Kalie (Gaetan Lamy) following the outside cover. 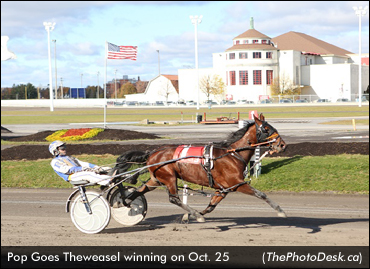 Down the backstretch, Monster Magic began to fade and Gamy moved three-wide with Bemmol Kalie and cleared that foe by the three-quarters in 1:32.2. But it was too little too late as Roy merely just raised the lines on the leading Pop Goes Theweasel and the filly pulled away from the field in the stretch to win by seven and one-quarter lengths in 2:01.1. The pocket-sitting Classic Breeze finished second with Bemmol Kalie third.

The win was the seventh in 12 starts for Pop Goes Theweasel, who is owned by Roland Trudel of Becancour, Que. She paid $4.20 to win.