Storms encased the $163,000 second leg of the Massachusetts Sire Stakes (MASS) for three-year-old on Tuesday, Oct. 23 at Plainridge Park. A total of five MASS divisions, two for sophomore colt pacers and one for the rest, were contested during the program.

Ithinkthatsmine remained the one to beat in the $40,400 three-year-old filly trot and won in convincing style once again. Leading at every post, Ithinkthatsmine and driver Shawn Gray dictated by open lengths and clocked splits in :28.4, :58.1 and 1:27.3 before turning for home and cruising to a five-length win in 1:58.1.

Now with 10 wins on the year, Ithinkthatsmine, by RC Royalty and trained by George Ducharme for owner Ray Campbell Jr., has gone over the century mark in earnings; now boasting $112,280 in purses.

Heavy 1-9 post-time favourite Im a Clown, driven by Mitchell Cushing, left quickly for the lead in the $20,175 first division of the three-year-old colt pace but had early opposition on the point from Twelve. Twelve rode shotgun outside the leader to the five-eighths marker and, at that station, Cushing urged Im A Clown and the pacer opened up a two-length advantage.

As the race went around the last turn, Im A Clown, an Im Gorgeous colt trained by Kevin Switzer for owner Nelson Malin III, continued to extend his lead and ended up six-lengths in front at the wire under no urging whatsoever in 1:56.3. He paid $2.20 to win.

Latent Print, driven by trainer Scott Renz, got away third while Shiplap hustled to the front in the $20,175 second division of the three-year-old colt pace. With the race in single-file order through three-quarters of the mile behind the leader, Shiplap got everything his own way. But Renz rolled Latent Print off the pylons heading into the last turn and drew even with the leader at the head of the stretch.

The top two battled when Beantown Elijah joined the fray and all three were within a length of each other for the drive. However Latent Print, a Camluck colt owned by Renz and Holly Guastalli, got the advantage at the wire and won by a neck in 1:55.4, a lifetime mark. He paid $14.00 to win.

Gonna Hear Me Rohr, driven by Drew Campbell, took the lead in the $40,100 three-year-old filly pace and went to the quarter in :29 flat. Deco Dusty soon pulled from third and claimed the front before they hit the second turn. 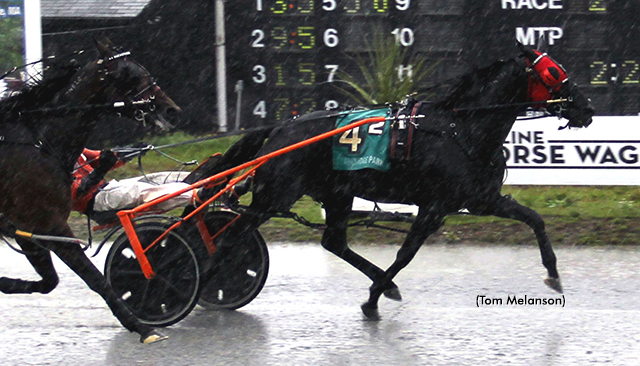 Positions remained unchanged until the three-quarter pole when Rock Me Threetimes came storming up on the outside to get within a length of the leader as they hit the stretch. But, when her bid failed, Delco Dusty faded off the pylons and left Gonna Hear Me Rohr a clear path down the lane. Gonna Hear Me Rohr, a Western Maverick filly trained by James Dunn for owner Bradford Veilleux, then flew through under heavy urging by Campbell and won in 1:56. She paid $9.00 to win.

Longshot Paging Doctor Teo fired for the front in the $42,150 three-year-old colt trot while favourite Kinda Lucky Lindy (Greg Merton) sat second and Hashtagmadeyalook ducked in third. After the leader got to the quarter in :28.4, Hashtagmadeyalook quickly pulled and tried to take command but parked to the five-eighths before he actually cleared.

Kinda Lucky Lindy tracked the leader into the final turn. Driver Greg Merton then pulled the Lucky Chucky colt and came right at Hashtagmadeyalookh, with the two trotting side by side around the turn and into the stretch. When they straightened out, Kinda Lucky Lindy, trained by Domenico Cecere for owner Lindy Farms of Connecticut, proved best and pulled away to a two-length win in 1:58.2. He paid $5.00 to win.

The $800,000 finals of the 2018 Massachusetts Sire Stakes will be held at Plainridge Park on Tuesday, Oct. 30. Eight $100,000 divisions will go postward starting at 2 p.m. and state-bred champions will all be crowned by the end of the day.