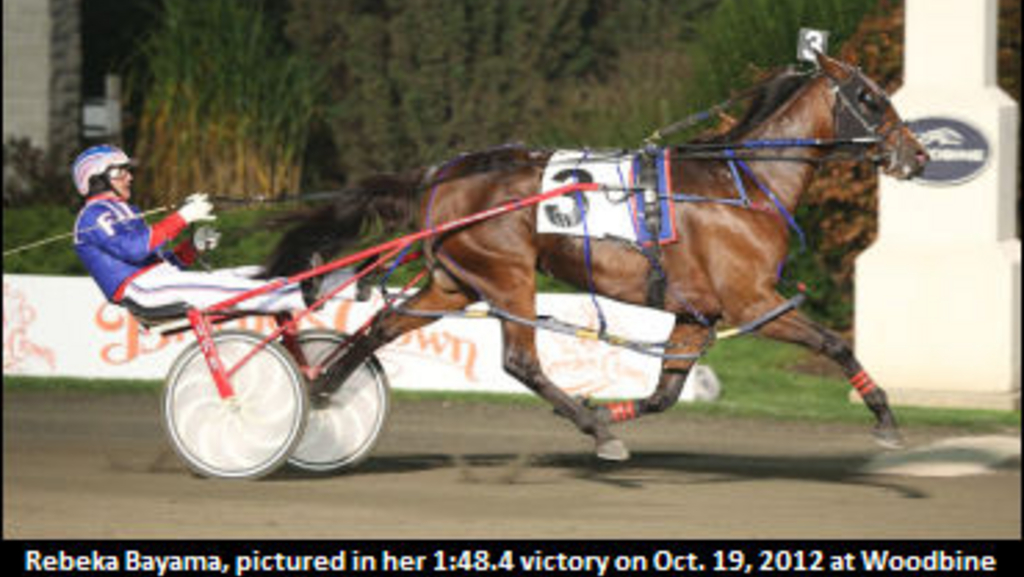 His mare drew Post 9 for her Breeders Crown final, scheduled for this Saturday at Woodbine Racetrack, but even though his charge will be starting from far outside, Yves Filion wouldn’t change places with anyone.

“The one we had to beat (Put On A Show) decided to go against the boys. Now we’re the one to beat, the way she’s been racing," said Filion, the breeder and owner of five-year-old pacing mare Rebeka Bayama. "Put On A Show beat her in the Lady Liberty, but no mare’s been race-timed faster. The only negative is the nine hole; the rest is very positive.”

Filion’s mare enters the race off a track-record-equalling performance of 1:48.4 in the Fillies and Mares Open at Woodbine on Friday. It was her 23rd victory in just 45 lifetime starts.

“She hasn’t been used much, not many lifetime starts, and that’s helped her," said Filion. "I plan to race her again next year, and I think she’ll be just as good."

Filion paid a supplement of $37,500 (U.S.) to make the Quebec-bred mare eligible for the Breeders Crown this year, and would have done it last year if he’d known it was possible. “I’ve since learned that paying her this year makes her eligible for the rest of her life. I hope that will pay off next year as well.”

Filion’s only Breeders Crown victory so far came with pacing horse Goliath Bayama at the Meadowlands Racetrack in 2001. His son, Sylvain, was in the sulky that day, as he will be Saturday behind Rebeka Bayama.

Small wonder he’s bred back her dam Joyce Bayama to Leader Bayama, a former Quebec star who stood in Ontario in 2012 but will be returning to Quebec for the 2013 breeding season.