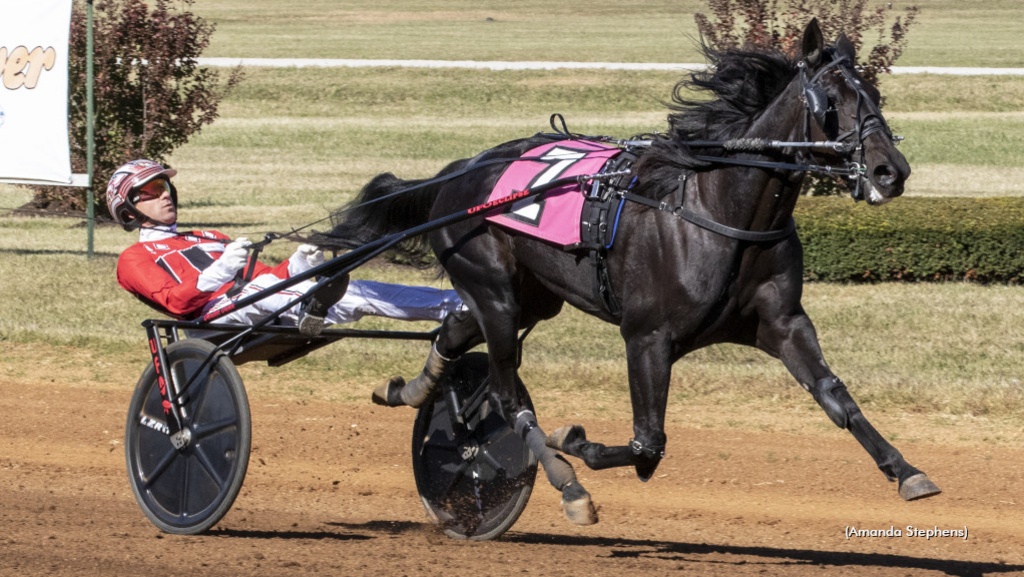 Chris Ryder knows he will have at least one Breeders Crown finalist — returning champion Niki Hill in the event for three-year-old female pacers, which did not require eliminations — and will look to add four more horses to his total in Friday’s (Oct. 21) elims for two-year-olds at Woodbine Mohawk Park.

Ryder, who has trained five Breeders Crown winners in his career, will send out three well-regarded hopefuls in female trotter Walner Payton (3-1 on the morning line), male pacer Handlelikeaporsche (3-1) and female pacer Proud Mary (6-1), plus a “sleeper” in male pacer Goldin Greatness (15-1).

All eliminations for two-year-olds will be contested Friday at Mohawk, with the action beginning at 7 p.m. (EDT). Breeders Crown elims for horses ages three and up will be held Saturday, also starting at 7 p.m.

Walner Payton (pictured above) heads to her elimination off a career-best 1:52.2 win in a division of the International Stallion Stakes at Lexington’s Red Mile on Oct. 8. Her time was the third fastest of the season by a two-year-old trotter and second among fillies.

For the year, Walner Payton has three wins, four seconds and a third in 10 starts. She won the New Jersey Sire Stakes championship in July and finished second to Special Way in the Kentucky Championship Series final in September. The loss was one of four consecutive runner-up finishes behind Special Way in Lexington.

“She’s as honest as the day is long,” Ryder said about Walner Payton, who has earned $368,650 this season. “She’s a pretty good filly. Special Way kept drawing inside of us and we just couldn’t get her. But it’s all good.”

Walner Payton, by Walner out of Lonely Lady, was purchased under the name Singeth With Joy for $510,000 at last fall’s Lexington Selected Yearling Sale. Owner Ken Jacobs renamed the filly after a great-granddaughter.

“They get excited when they see her race,” said Jacobs. “We’re just having fun. She’s a nice little filly.”

Handlelikeaporsche competes in the second of two $25,000 eliminations for male pacers. The son of Lazarus N-The Signature has finished no worse than second in six career starts, winning three. He heads to his elim off back-to-back Grand Circuit victories at the Red Mile and will start Friday from post six with Dunn in the sulky.

“Dexter likes him; he has a lot of good things to say about him,” said Ryder, who owns the colt with William Ezzo, Robert Mondillo and Barry Spak. “He’s an easy keeper, has got good speed and his racing manners are pretty good. He always gets himself in the race. There is nothing not to like about him.”

Handlelikeaporsche, who finished second in both the New Jersey Sire Stakes championship and New Jersey Classic Series ‘A’ final, was purchased for $100,000 at the Standardbred Horse Sale. He has earned $228,850.

Metro Pace and Ontario Sire Stakes champ Stockade Seelster is the 5-2 favourite in Handlelikeaporsche’s elimination. He will start from post 10 with Jody Jamieson driving for trainer Ian Moore.

The 5-2 favourite in the first elim is Kentucky Championship Series winner Confederate, who will leave from post six with Tim Tetrick at the lines for trainer Brian Brown. Ryder’s Goldin Greatness starts from post nine with Dunn driving.

Goldin Greatness has a win in the Kindergarten Classic Series in eight starts this season. The son of Huntsville-Bet On Hill finished third in his most recent outing, a division of the International Stallion. Goldin Greatness was fifth on the inside, got shuffled back to eighth at three-quarters and found room in the stretch with a four-wide move to miss by 1-1/4 lengths. His :26 last quarter was bettered by only one horse on the day’s 10-race card.

Goldin Greatness was purchased for $80,000 at the Standardbred Horse Sale and is owned by Ryder, Ezzo, Evan Katz and Joe Sbrocco & JAF Racing.

Proud Mary, a daughter of Sweet Lou-Tug River Princess, races in the first of two $25,000 eliminations for female pacers. She was a two-time winner on the Pennsylvania Sire Stakes circuit and finished third in the final. She last raced on Sept. 24, finishing fifth in the Shes A Great Lady at Mohawk.

“I don’t think it’s a negative,” Ryder said of her respite. “She trained super. We’ll hope for the best.”

Tim Tetrick will drive Proud Mary, starting from post one, for owner/breeders Let It Ride Stables and Bottom Line Racing. The filly has hit the board in six of eight races and earned $140,346 this year.

To view the complete entries for this weekend's Breeders Crown eliminations, click one of the following links: