Wiggle It Jiggleit Is Crown-Bound 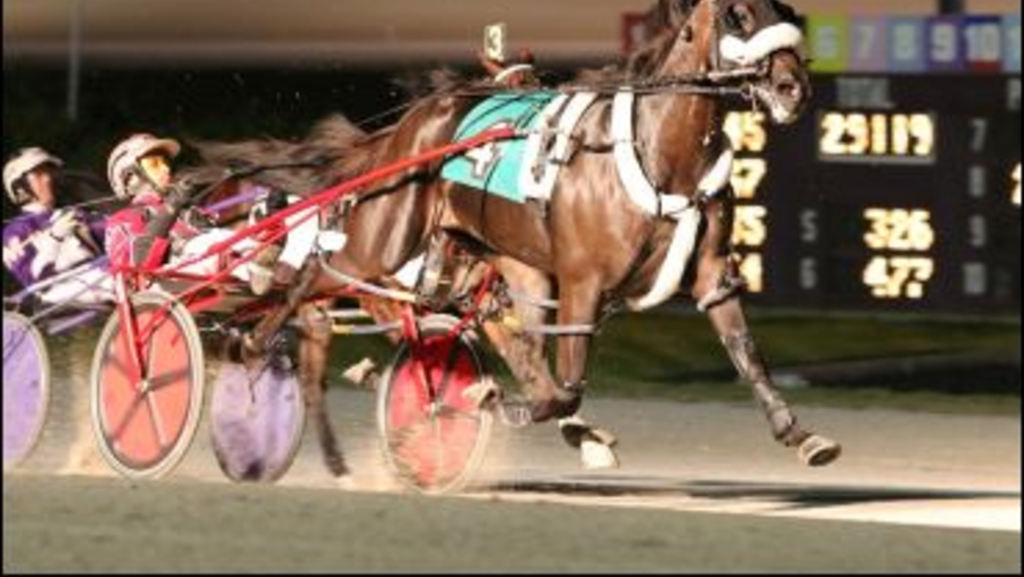 Defending U.S. Horse of the Year Wiggle It Jiggleit has been supplemented to the $421,000 Breeders Crown Pace, which will set up another epic showdown with arch-rival Always B Miki, the winner of last year’s ‘Crown’ title for older pacers.

Wiggle It Jiggleit, owned by George Teague Jr. Inc., and Teague Racing Partnerships LLC, is the richest harness horse this year with seasonal earnings of $1,722,162. He will meet up once again with the fastest Standardbred of all–time, Bluewood Stable, Roll The Dice Stable and Christina Takter’s Always B Miki, who lowered the world pacing mark to 1:46 on October 9 at Lexington’s Red Mile.

The two have electrified the sport battling in the open ranks this year, and the adage “In harness racing, it all comes down to the Breeders Crown” may never hold truer. The pair has met seven times in open stakes competition, with each horse winning three – Shamballa beat them both in the US Pacing Championship, though Wiggle It Jiggleit finished second and Always B Miki fourth in that match-up.

One of four Breeders Crown events slated for the Meadowlands Racetrack on Friday, October 28, the Crown Pace will be featured in a one-hour live broadcast on SNY (Sports Net New York) from 9-10:00 p.m. (EDT).

Though owner George Teague and trainer Clyde Francis had not been inclined to supplement their extraordinary four-year-old gelded son of Mr Wiggles, the ease with which he racked up his 38th career win in what was his 50th start -- a $250,000 Invitational at Yonkers last Saturday -- changed their minds. ‘Wiggle’ was the lone supplement to any Crown event by the noon deadline of Monday, October 17.

“The main reason I wanted to do it was because it’s good for the business,” said Teague from his home base of Harrington, Delaware. “People like to see him race and these two together, they may meet another time, but for him to be in the Breeders Crown it’s really good for the business more than anything.”

“This horse just gets stronger and sharper as the year goes on," marvelled Teague. “When he trained before the Yonkers race I thought he was sharper than he was in April and May. He’s never taken a week off all year and never had a bad race, either.”

Regular entries for eligible trotters and pacers are due by 9:00 a.m. Tuesday, October 18, at the Meadowlands race office.

Elimination winners draw for inside post positions 1-5 for the finals.

Nice little work out, as

Nice little work out,
as thought... they may not bust him off the wings for the lead.
Floated up, 3rd over, ran them down in 1:48.

In reply to Quite frankly, I'm surprised by KM Corcoran

Not sure how they will race

Not sure how they will race Miki tonight.
Meaning, how much are they devoted to winning tonight regardless of trip?
They might not race him hard.
Tonight's race is meant just to keep the horses sharp with no BC implications.
Ron Adams often takes the blinkers off Lady Shadow in these type of races then puts them back on for the big race. I have seen her race off the pace in these conditions just so they don't burn her out a week before the big race.

Mikey buddy, I'm startin to like ya but don't get me started on Niatross lol :)

In the start of the season, I

In the start of the season, I posted... I LOVE THIS HORSE I WOULD TAKE HIM OVER ANY HORSE I HAVE EVER SEEN RACE. Then gave my reasons as to why. Then came the talk of Niatross, Somebeach. Nice horses... never raced past age 3.

Quite frankly, I'm surprised the Teagues supplemented WIJI. $50,000 is a lot of dough just to enter a race.

Carl... don't take Mikey seriously... he is just stirring the pot for his favorite horse WIJI.
All the best to everyone.

Tim...totally agree...WIJI and Miki will be joined at the hip for this race.
Not sure about overall HOY...Aged HOY yes...

Mikey...Shamballa...what different trip are you talking of. He took a perfect 2 hole trip. He never has to go 3 or 4 wide. He made the top easily and then squandered a sweet 2 hole trip and could not keep up.
You might want to go back and watch that race again.

Don't underestimate SHAMBALLA. He is the real deal and he belongs here !!! I think he could have been world record holder with a different trip . BEWARE !!!

Do we think that horse of the

Blaine...absolutely...Without both Miki and WIJI in it would have been a walk in the park for either of them...if only 1 was in it,,,the closest thing to either of them is Shamballa then it really falls off the table dramatically.

Hats off to Team Teague for

Hats off to Team Teague for making the supplement payment. I'm biased towards Always B Miki, but there's nothing but positive sentiments for the Wiggleit Jiggle it camp.