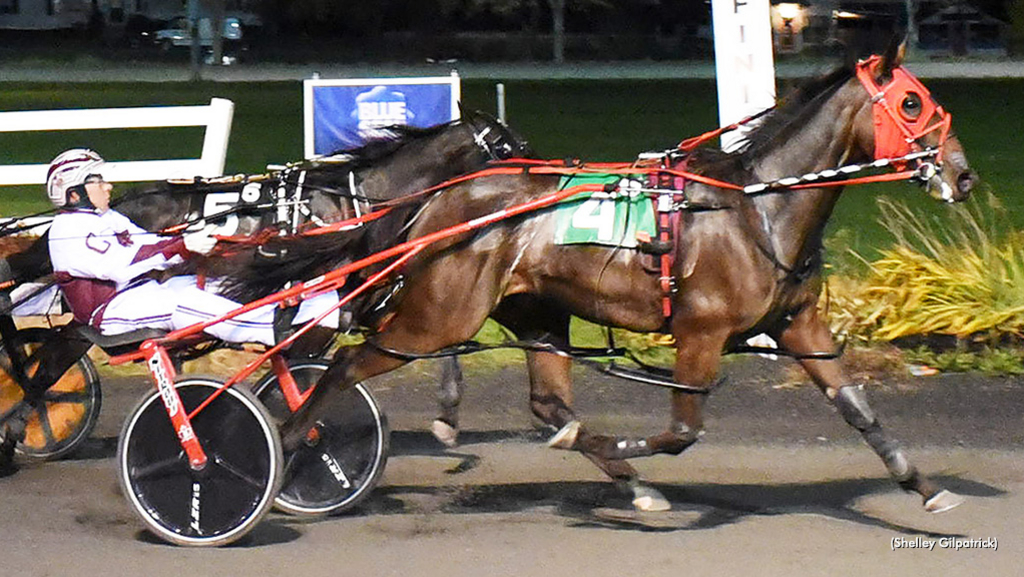 The rich $324,426 Maine Breeders Stakes (MSBS) sophomore finals are in the books following a rich card of racing at historic Bass Park on Saturday night (Oct. 15).

Driven by Walter Case Jr. for owner-trainer-breeder Marc Tardif, the gelded son of Western Maverick performed admirably under the lights for the special evening card at Bangor’s Hollywood Casino Hotel & Raceway. Scoring from post 4, Case put Deal With It Roman into gear and pushed on to the top with second choice Bandolito Blaze right alongside going through the first turn. Heath Campbell ducked Bandolito Blaze into the pocket for a millisecond just past the eighth pole, but was right back out and moving to set a snappy :28 opening panel.

With Case begrudgingly yielding command, Campbell continued on the lead and landed at the half in :58. Ugotaearnyrstripes was the first to move into the outer flow, who managed to get to within a length of the leader into a 1:27.1 three-quarters. As the field rounded the final turn and moved into the home stretch, Case tipped Deal With It Roman off his perfect cover trip and coasted home a winner by 1-1/4 lengths, paying $3.60 to win.

Bandolito Blaze hung on for second. Daughtry was a hard-charging third.

As advertised, the indomitable Wolverina had things her own way in the $81,172 MSBS Three-Year-Old Filly Pace, picking up her 12th-consecutive victory. Driven by Nick Graffam for trainer-breeder Mike Graffam (who co-owns with Bill Arnold), the daughter of Cheyenne Hollywood went at 1-9 and performed as a heavy favourite should.

Leaving from post 3, the race appeared to be more of a training mile for the fantastic filly, with pressure coming in the form of Pembroke Legacy as the winner cruised to a 1-3/4 length victory in 1:58. Pembroke Legacy finished second; CBF Fin was third.

The $81,014 MSBS Three-Year-Old Colt and Gelding Trot was captured by point-leader Katahdin Mark, who went right to the top and never looked back to prevail by 1-1/2 lengths.

The son of Noble Venture and his trainer-driver Gary Hall set an opening panel of :30.4 and then put the field to sleep with a slow 1:03.4 half. With Wild Venture sitting in the catbird seat, only Chamorro took a shot at the leader while charging up the backside going into a 1:32.4 third panel, but soon found the pylons again and had to settle for second best. Katahdin Mark, owned and bred by James and Betsey Kelley, won in 2:02.4 to collect his ninth victory this season and return $2.80 to win. Chamorro finished second. Wild Venture was third.

In the non-wagering event $81,161 MSBS Three-Year-Old Filly Trot, one of the four "Pembroke" entrants found the winners circle for owner-breeder Bill Varney and trainer Valerie Grondin.

Driver Heath Campbell had pylon position Pembroke Faye and never had an anxious moment once division leader Maplewood Slugger got parked and then went off stride going to the three-quarter pole. The home-bred daughter of Pembroke Slugger scored by four lengths, taking a 2:01.4 lifetime mark while winning her third race of the year. Maplewood Slugger came from 12 lengths back following her miscue to finish second. Pembroke Booboo took the photo for third by a whisker over Show No Tears.