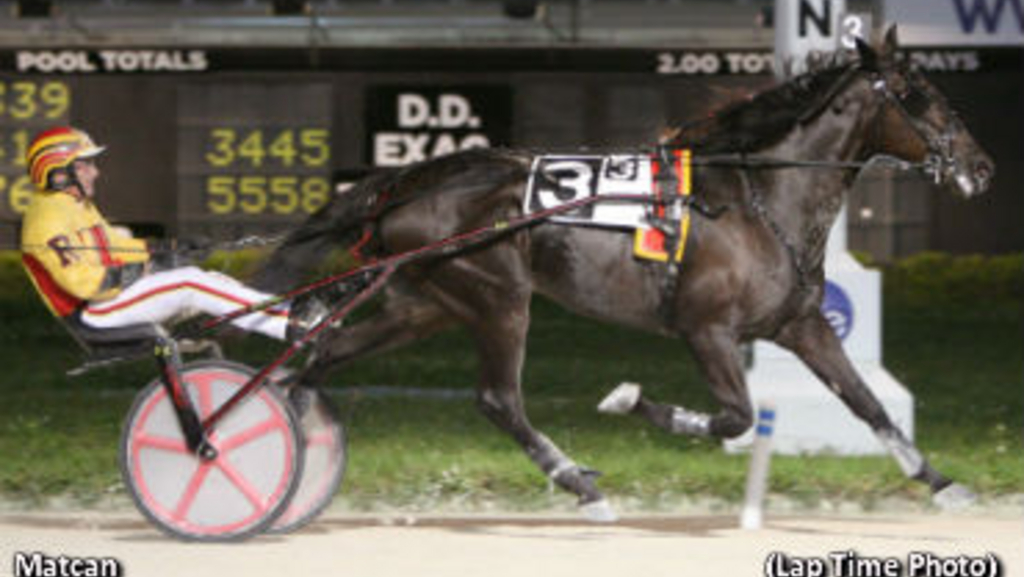 In the $31,400 purse title event for the two-year-old fillies over the track rated good due to rain an hour before the program, Ranger was partnered with Pinch Of Thyme for the first time. The daughter of Basil-Chicory Cinder followed the final half move of heavily favoured Peace Please (Wally Hennessey) into the stretch and when that rival went off stride, Ranger guided his charge home comfortably in 2:02. Feel The Haze, in rein to Mike Micallef followed in for second and Teal with Jay Sears in the bike was third. Mel Turcotte trains Pinch Of Thyme for owner Fred Morosini of Deerfield Beach, FL. It was the filly's first win in seven lifetime trips as she increased her career earnings to $20,587.

The purse was $30,000 for the Stallion Stakes title match for the two-year-old colt and gelding trotters in the very next race. Ranger was right back for another helping of the winner's circle after calmly moving Matcan to the front at the quarter and never looking back with the 2-5 favourite in 2:03. Its Very Possible, the longest offering on the odds board at over 100-1 followed in for the place position with owner Jim Gluhm in the bike. Lovable Guy partnered by Jay Sears was up for third. Stewart Nemiro of the Ranger Stable conditions Matcan, a Matchem Hanover-Cans Money Maker gelding, for Fred Monteleone Stable of Pompano Beach.

Though the track was still rated as good the top mares on the grounds put on an explosive show when turning to the gate for a $12,000 purse in the evening's sixth race.

Andy Santeramo tried to send My Lady Bonnard down the road but the fractions of :26.4, :55.2, and 1:23.2 caught up with her at the three quarters. Pocket pulling to the front was Virtual Princess by Mike Micallef, and she was caught in the late stages by Princessofdarnkess with Wally Hennessey in the bike. The time of 1:52.1 was a life's mark for the four-year-old daughter of The Panderosa-Mattintosh, owned by Vicki Mattison, Leola Pochesi and Gil Pochesi. It was a triumphant return to South Florida for trainer Jim Mattison after a Summer and early Fall campaign at Saratoga.

The Monday evening program also marked the return of trainer Pete Pellegrino for the 2011-2012 campaign in South Florida. Last season's leading conditioner at Pompano wasted no time winning as his first starter, Jetta Baran, unleashed a powerful front stepping win over mares claiming pace rivals in 1:55.1 with Bruce Ranger in tow for the Baron Racing Stable of Horsham, PA.

The FSBOA Stallion Stakes for two-year-old pacing fillies is set for Wednesday, October 12 for a purse of $31,400. The Stallion Stakes is the third of five events in 2011 for the State-bred two and three-year-old fillies and colts. "Super Night" is rapidly approaching on November 5.