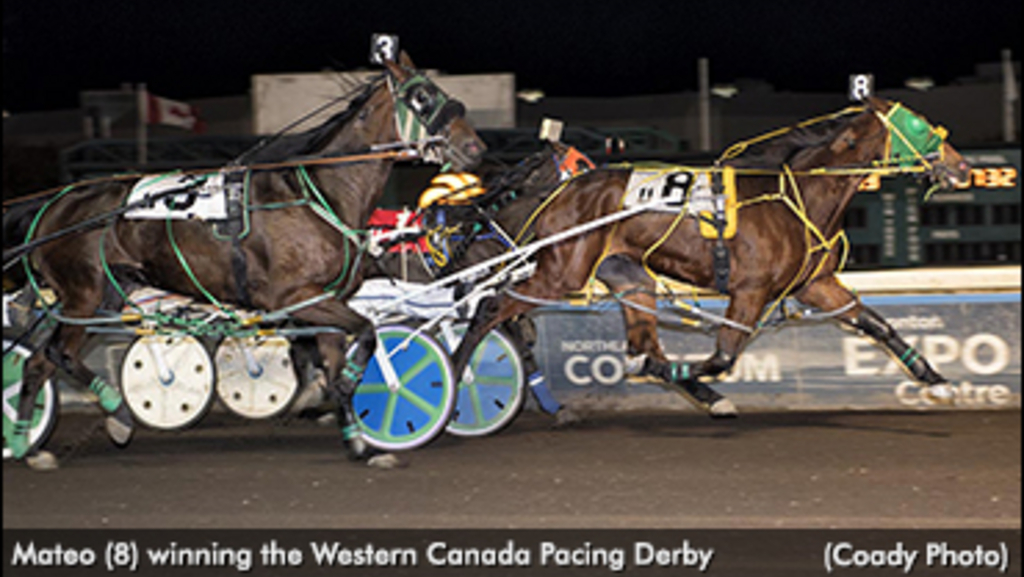 Shooting to the front from post eight, Mateo took the $138,430 Western Canada Pacing Derby in 1:53.4 on Saturday, September 30 at Northlands Park.

Mateo cleared the lead from Ima Dude following a :27.3 quarter. Unchallenged as the field paced single file into the turn through a :56.2 half, Mateo was later challenged by Senga Nitro, tipping from third, at three-quarters in 1:25, holding sway through the stretch as Senga Nitro finished second and Ima Dude finished third.

Winning his seventh race in 13 starts this season and his 11th race in 22 starts overall, Mateo, a three-year-old gelding by Blue Burner out of the Western Ideal mare Mater Deo, has earned $286,478 for owners Christine Cutting and Jim Marino, who also drove. Trained by Justin Currie, he paid $6.20 to win.

Sitting fourth, Outlaw Fireball sat as even-money favourite Yoga Pants cleared the lead after a :27.3 opening quarter. Leading past the half in :56.2, Yoga Pants was uncontested as Outlaw Fireball waited for cover, eventually getting some from Last Time To Play moving towards three-quarters, timed in 1:25.2.

Yoga Pants faltered at the rail in the stretch. Outlaw Fireball fanned toward the center of the track to take the lead into the eighth pole, while room at the rail opened for Thats It to take second, and Steady Breeze, weaving wide from the back late, finished third. 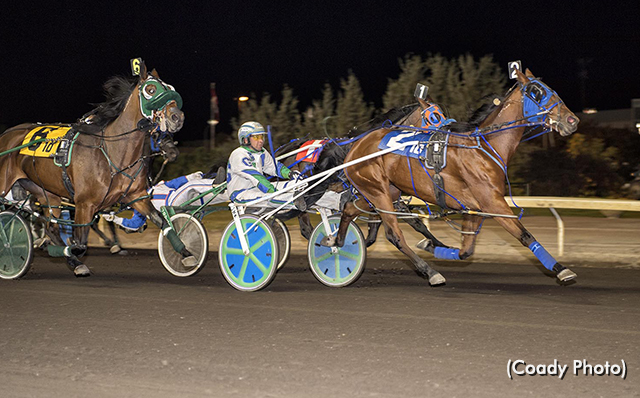 A three-year-old filly by Blue Burner from the As Promised mare Watchasgirlsgoby, Outlaw Fireball, winning her 11th race in 20 starts, has earned $274,473 for owners Jean Francois Gagne, Peter Van Seggelen, Carl Warnaar, and Tapron Holdings. Trained by Marjorie Dumont and driven by Jean Francois Gagne, she paid $8.10 to win.

Blitzing to the front in the backstretch, Paradise Hill kicked away to a four-length victory in the first of two $25,000 divisions of the Horzion Pace, winning in 1:56, a track-record performance despite broken equipment that lowered the previous mark of 1:56.3 set by Barona Ice.

Real Sharp launched to the front from post eight, challenged by Custards Laststand through a :28 quarter before letting him take the lead in the stretch. Paradise Hill, sitting fourth, edged wide through a :57.2 half before rushing towards pacesetter Custards Laststand in the backstretch, overtaking him to lead by two-lengths at three-quarters in 1:26. Custards Laststand held on for second, while Gonna Funku Up rallied from off cover for third.

Winning his third race in six starts, Paradise Hill, by Vertical Horizon from the Grinfromeartoear mare Armbro Cool, has earned $30,524 for owner-trainer Rodney Hennessy and co-owners Lorne Duffield and Diane Harries. Driven by Michael Hennessy, he paid $4.80 to win.

No Time At All grabbed the front moving around the final turn, taking the other division of the Horizon Pace in 1:56.2.

Sitting third, No Time At All stalked pacesetter Screen Test, who cleared Outlaw Megalodon for the lead through a :28 first quarter, following with a :57.3 half. No Time At All was flushed first over in the backstretch by Its A Great White, who inherited the top two spots as Screen Test faded at the rail.

No Time At All passed three-quarters in 1:26.1 before kicking three-lengths clear of Its A Great White, holding a three-and-three-quarter length margin of victory at the wire over odds-on favourite Outlaw True Grit, rallying from fifth over, and Snap Test, closing from third over.

Competing for the interests of Jean Francois Gagne, Peter Van Seggelen, and Carl Warnaar, No Time At All, a two-year-old gelding by Big Jim from the Cambest mare Shirley Hall, won his first race in six starts, earning $18,308. Trained by Marjorie Dumont and driven by Jean Francois Gagne, he paid $16.50 to win.

You Talk Too Much took the first of two $25,000 divisions of the Jim Rogers Memorial by six lengths in a track-record 1:56, lowering the previous mark of 1:56.3 set by Shark Fest.

Leading the whole mile, You Talk Too Much held the front through fractions of :28 and :57.3 before starting to kick clear of her competitors, pacing three-lengths clear of pocket-sitter Maid In Alberta and first-over challenger Paperback Thriller in 1:26.4. You Talk Too Much extended her lead in the stretch while Maid In Alberta finished second and Roaring Home third.

Owned, trained, and driven by Keith Clark, You Talk Too Much, a two-year-old filly by Well Said from the Art Major mare Another Hanover, is co-owned by Robert Jones, and won her second race in seven starts, earning $27,773. She paid $5.00 to win.