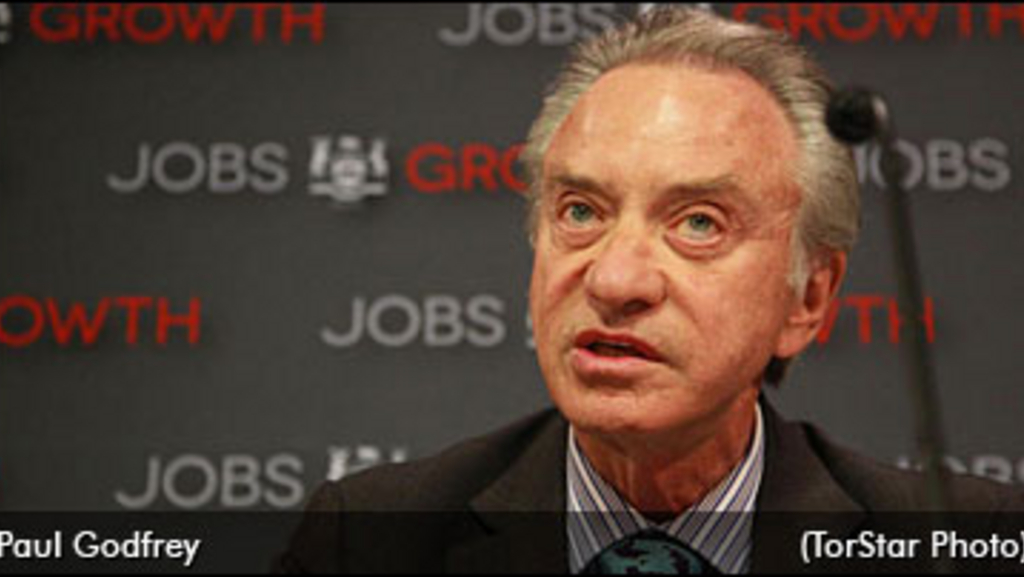 OLG chairman Paul Godfrey found himself in hot water on Tuesday after making comments about not wanting a casino in his own backyard.

In an address to the business crowd at the National Club on Tuesday morning, Godfrey made the following statement as found in the National Post.

"You see the polls that are taken that ask people, ‘Are you opposed to a casino in your neighbourhood?’ like one newspaper did. And a lot of people say ‘No not in my neighbourhood.’ And I gotta tell you, I wouldn’t want it in my neighbourhood, but at the same time you’re not putting it in a residential area."

As a result Councillor Adam Vaughan issued a news release asking the OLG to reconsider placing a casino in downtown Toronto, home to "hundreds of thousands of people."

“These communities deserve not only to be recognized by your government and its appointees, but their rights and quality of life deserve the same consideration as Mr. Godfrey’s neighbours and friends,” noted Vaughan in an open letter to Finance Minister Dwight Duncan.

“Perhaps on the other hand, Mr. Godfrey is right. Residential neighbourhoods are not appropriate places for casinos and expanded gambling. If this is true, then please make sure no casino is built downtown.

“Either apologize for making such a stupid comment, or stand by the statement and strike downtown Toronto from the sites being considered for a casino,” stated Vaughan.

The Post has disabled comments on their story linked above. Godfrey is the CEO of Postmedia, which owns the National Post.

Debate over a casino in Toronto heats up on Wednesday night with the first of five public meetings set for Toronto City Hall.

Two of the main rats of the

Two of the main rats of the Liberal party have already jumped off the sinking ship McGuinty and Duncan ,to let someone else clean up their mess. Godfrey controlls the majority of the media so not much of this we wright about gets to the general public,I for one beleive he is the worst person that ever walked on Canadian soil, just look at what he did with the Rogers Center when it was built, over budget by $300 million final cost over $600 million (good business)then sells it for a mear $25 million to Rogers ,the balance to be paid by who else you and me the tax payer, evereything Godfrey touches turns into poison, as a tax payer and proud Canadain I demand his immediate resignation just like I told the Liberal Party at the Plowing Match last fall the I wanted McGuinty's resignation.
The damage this govenment has done since they have been in power will take Ontario 25 years or more to recover from.I'm not sure that the next Liberal leader will make any differance but at least we can try to convince them that the lives of thousands of rural Ontarion's are on the line,so lets all bond together for the love of the sport and our livelyhood

We have/had a perfect setup

We have/had a perfect setup with horseracing and the Slots. So perfect that the States south of us have followed our recipe to the T and are seeing the great benefits that it bestowed on Ontario since its inception. They sing praises of our program worldwide. What part of this doesn't Godfrey get? Just what promises of great personal fortune have been set under his nose by the casino owners and the likes of Larry Tanenbaum to destroy what is so obviously (to the entire racing world) a huge success in Ontario? Godfrey has a track record of looking after number 1---himself---and leaving a trail of mismanaged disasters behind him. He publicly admits that he wouldn't want a casino in his backyard but it's just fine to put one in downtown Toronto where, according to him, there are no residents. Just shows how ignorant and uninformed he is about his own city! NOT IN MY BACKYARD was the cry from the public when Mike Harris'government wanted to expand gambling into neighbourhoods. After using their heads and listening to the public, they came up with a sensible agreement with the horseracing industry to put Slots where they were the least offensive. Look how that turned out. They make more money for the entire province than any of the other gambling venues and no one (except Godfrey) complains about their existence. What is so obviously a win/win situation for all and a shining example for the rest of the racing world is not worth keeping intact according to Godfrey and the Liberals. Odd? You betcha. Everyone I talk to about this debacle from these clowns asks "why"?". There is only one reason that comes to mind----huge payoffs for the orchestrators of THE PLAN. Why is no one in the media, the ombudsman's office, the government, the police forces, etc. taking it as a serious criminal act? Could it be power, money, threats and promises coming from those in lofty positions that are ramming this into Ontario to their own benefit no matter what the cost? Do ya think?

Of coarse Godfrey shut down

Of coarse Godfrey shut down the comments, the Liberals would shut us all up if they could doesn't make you wonder how can anyone really run the OLG and a National News Media at the same time but it is clear that Liberals put Liberals in patronage positions to get rich and look the other way all the while running rough shot over hard working Canadians.
Norm Walker

It's truly sickening that

It's truly sickening that this clown Paul Godfrey with the help of Dwight Duncan can put the wheels in motion to destroy a flourishing industry that is deeply rooted in Ontario. Why haven't these guys been taken to task and forced to step down? I left McGuinty's name out solely because he already quit.

Seriously - you are looking

Seriously - you are looking to building them in the heart of every city, prime residential areas. Sooner or later you would think the OLG will have to admit that the casinos were and are best located at racetracks which are well out of residential areas. The public's desires have not changed since the 1970's, "NOT IN MY BACKYARD"

He is doing everything he can

He is doing everything he can to have a casino downtown Toronto when the obvious place for it would we Woodbine!! Give in Godfrey!!!

Paul Godfrey Shame on you,

Paul Godfrey Shame on you, Shame on you. Every Conservative in Ontario says Shame on you. You stood beside us when Mike Harris was elected and cheered with us being a long time Tory supporter. You are now a Turncoat. Everything that Mike Harris and Norm Sterling did to promote harness racing in the past 16 years in Ontario you have destroyed in the past 9 months being a PUPPET FOR lARRY TANENBAUM and his bingo halls.Paul I hope you can sleep at night for the devistation you have brought to not only harness racing families but to the entire rural Ontario community. Charlie Reid Meadowview Farms.

That statement shows us why

That statement shows us why we are all in the trouble we are in. He should run for head of the Liberal Party. He'd fit in well.