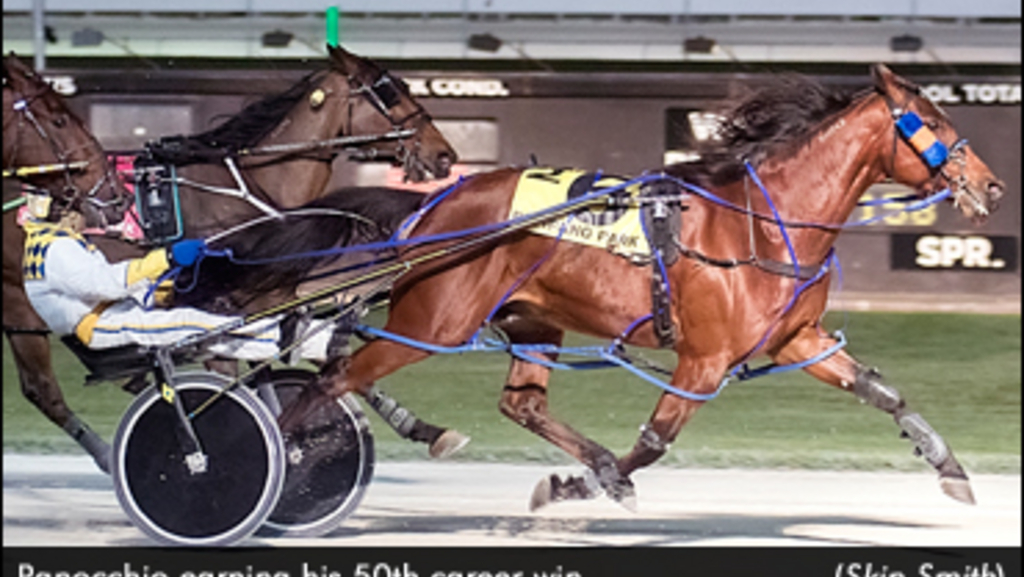 Driven by Hall of Fame driver Wally Hennessey, the seven-year-old gelded son of No Pan Intended, beginning from the outside six post on a coolish night — 61 degrees — in South Florida, took command around the opening turn and went on to post fractions of :27, :56 and 1:23.4 before a :28.2 finale left Fritzie Pic Up Man, handled by Tom Jackson, three-parts of a length back in second at the wire.

Bluehourpower, teamed up with Ricky Macomber Jr., finished third after a backside binge from fourth that put him a threatening second around the final turn before faltering a bit late. Whogoesfirst used a ground-saving journey to finish fourth while Duc Dorleans picked up the minor award in the field of six.

After the event, driver Hennessey related, “Well, it was kinda cool tonight — not as cool as Chicago or New York — but, cool, nonetheless for Florida. I wanted to get him to the top tonight to try and control the pace and we got a nice breather in that second quarter and that helped a lot.

“On the backside, Ricky’s horse [Bluehourpower] was pacing strong so Panocchio, on his own, picked up the pace and held him at bay and, in the lane, he was on his own all the way home.

“Considering the cool temperature, he did just fine!”

The brilliant pacer has won 28 of his 41 career starts at Pompano Park and currently holds the track record of 1:48.3.

Owned by Emile Johnson Jr. along with trainer Jim Mattison, Panocchio enriched his multitude of backers with a win mutual of $2.40.

The six-year-old altered son of Third Straight, a $5,000 claim some three months ago, has steadily moved up the ladder since, and, on this night, used two moves to score in 1:52.2, his margin of victory one and a half lengths over the late-charging Mystic Desire, driven by Aaron Byron.

Abreathofreshart was third for Wally Hennessey while Rockntouch finished fourth. Secretsoftheknight, last halfway through the mile, rallied to finish fifth in the field of nine.

Legal Spike, leaving from post five, nearly pushed the Hummer Starting Gate out of the way to take command early with Pop Cop (post seven) and Ideal Fashion (post eight), both on the prowl with the latter taking the field to the opener in a hot :27. Pop Cop was next and Legal Spike third -- but not for long.

Three-eighths into the mile, Legal Spike was back on top, posting subsequent panels of :55 and 1:23.3 before his :28.4 sprint home sealed the deal.

Racing continues on Monday night with the $12,000 Open Trot with Cashahallic installed as the 3-1 morning line choice in the field of nine. The nine year-old Richie Silverman trainee comes into the action looking to add to his lifetime bankroll of $336,765. Aaron Byron is expected in the bike. Post time is set for 7:20 p.m.