Super Bowl Kicks Off At The Big M 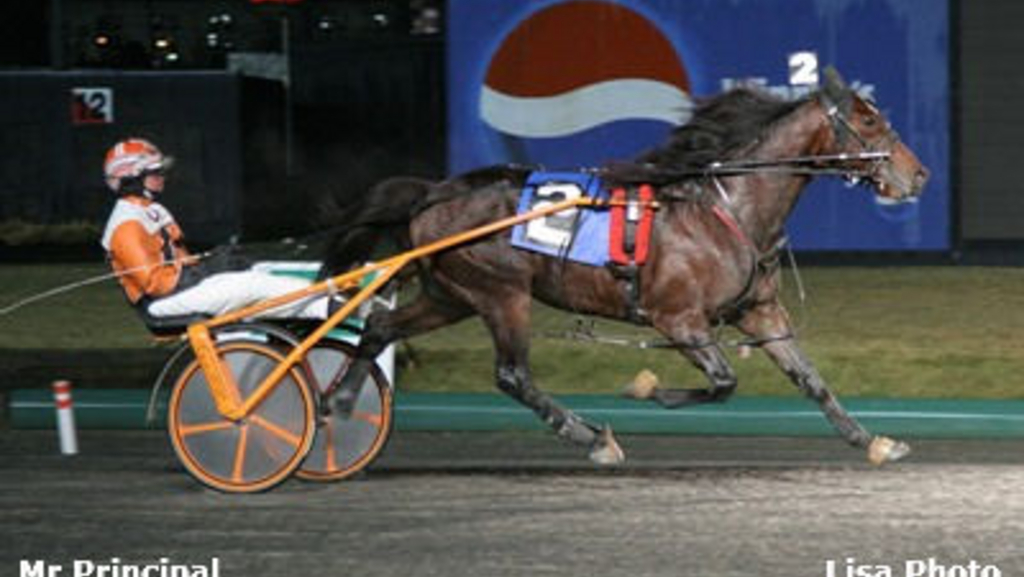 with six $12,500 divisions for four-year-old trotters and younger.

With Brian Sears at the lines, the 4-1 third choice launched a first-over bid from fourth past three-quarters before charging home for the win. Swift Slide (Ron Pierce) came on for second as pacesetter Early Morning Call (Yannick Gingras) faded to third.

The second division went to fan favourite Diamond Hunter and driver Eric Goodell in a time of 1:59.2.

The Larry Remmen trainee did all the work on the front end then edged away with a :28.4 final frame for a two and three-quarter length victory ahead of My Back Pages (Daniel Dube) and Annie Hall (Brian Sears).

With Andy Miller in the bike for trainer Erv Miller, Mr Principal pleased fans in the following division with a dominating 1:57.4 victory.

Owned by Brittany Farms and the Reality Stable of Versailles, Kentucky, the four-year-old Andover Hall bay popped the pocket before the half and cruised home winning by six and a half lengths. Tropicana Ron (Brian Sears) was the runner-up while Punk Lady (David Miller) finished third.

Mr Principal, a five-time winner with $20,400 in the bank, is hip number 318 in the upcoming Tattersalls Mixed Sale.

Livin Out Loud and driver Stephen Smith posted a mild 5-1 upset in his division for trainer Don Guidette, Jr. winning in 1:59.3.

The four-year-old son of Yankee Glide tipped off second-over cover in the stretch and sprinted home in :28.4 for the win. Longshot Credit Watch (Eric Goodell) finished three-quarters of a length back in second and Counsel (Roger Mayotte) came on for third.

Livin Out Loud’s sixth win increased his earnings to $23,138 for owner Gary Stetson of Deerfield, Massachusetts. The bay will also join Mr Principal in the Tattersalls Sale as hip number 313.

Before the race, Aweful Beautiful was declared a judges scratch after unseating driver John Plutino, who did complete his remaining drives on the card.

Hypnotic Kris beat out the boys to win her division in 1:59.

George Brennan guided the Ken Rucker pupil to victory after engaging with Supreme Victor (Brian Sears) in a duel past the half. The 4-1 shot inched away entering the stretch and managed to hold off longshot Klm Express (James Marshall III) and Proud Moment (David Miller) by three-quarters of a length for the win.

The four-year-old Perfect Spiral mare scored her fourth win for Living The Dream Stable of Mahwah, New Jersey. The winner of $24,800 is hip number 141 in the January 19th sale.

The final division went to Lookin Ahead and Brian Sears who rallied from off the pace to score in 1:58.

The four-year-old favourite, who sat at the back of the pack, made a three-wide move at three-quarters and sprinted home for the win almost three lengths ahead of pacesetter All You Want (Jim Doherty). Fox Valley Granada (Cat Manzi) finished third.

In six starts, the chestnut son of Armbro Tunnel has recorded four wins and one second earning $16,498 for owners and breeders Lynn Wilfong of Kentland, Indiana and Brett Wilfong of Donovan, Illinois. Brett Wilfong also handles the training duties.

To view the charted lines from Wednesday, click here.