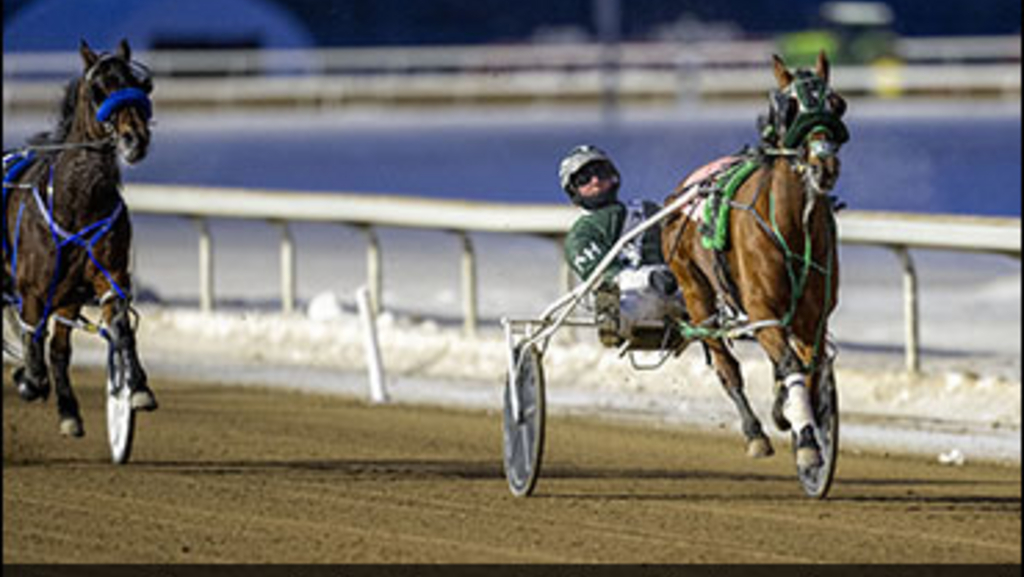 A romp and a toteboard stunner. Those were the stories of Sunday’s $68,910 Century Casino’s Filly Pace and $70,010 Western Canada Pacing Derby - Alberta’s most prestigious harness races at Century Mile. 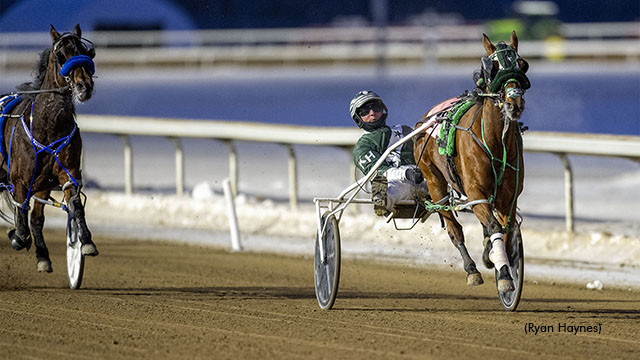 Nineteen-to-1 longshot Uptown Hanover shook off her outside post with an absolutely perfect drive by trainer/driver and co-owner Kelly Hoerdt to comfortably win the Filly Pace while even-money favourite Sunshine Boy won by about a 'thousand lengths' in the Derby for trainer/driver Brandon Campbell.

Sunshine Boy, recording his fifth straight win, paced in 1:56.1. Uptown Hanover, who has raced some of the top fillies in North America, got the mile in 1:57.1.

Racing in temperatures that started at -14 and quickly got colder as the 15-race card progressed, Uptown Hanover left from post seven and Hoerdt soon found himself on the rail in fourth place after an opening quarter in :28.3.

“I liked the spot I was in; I was very comfortable,” said Hoerdt. “I was right behind Graceful Horizon and that was the horse I wanted to follow.”

But Hoerdt didn’t stay there very long. With 4-5 favourite Exotic Dragon on top, Hoerdt pulled down the backstretch and with a huge, scintillating move easily went past them all.

“She was getting full of herself so I said, 'Ok, let’s go take a run at them and see how this goes.'”

It went in a blink. Uptown Hanover swooped past Exotic Dragon and into a lead she would never relinquish.

“I didn’t think I’d get around Nathan (Sobey) and his horse (Exotic Dragon) that quickly,” said Hoerdt. “She raced really good.”

Third in the December 18 eliminations, Hoerdt had revealed that Uptown Hanover was slipping and didn’t get a hold of the track that day.

“I didn’t have her shod right for the conditions," he had said previously. "I won’t make the same mistake on Sunday.”

“Even with a bad post, you never know how everything will work out,” said Hoerdt.

Burning Hot, who took the Gord and Illa Rumpel this summer — and who sat second during the early going right behind Exotic Dragon — finished second 2-1/4 lengths behind Uptown Hanover. But Burning Hot, sent off as the second favourite, was no match for Uptown Hanover. Neither was anyone else.

“Take nothing away from Burning Hot,” said Hoerdt. “She stayed with me down the lane but my mare just kept fighting her off.”

Inexplicably Exotic Dragon, who came in with five straight wins, had nothing left for the stretch and finished seventh and last.

Graceful Horizon, who had won 12 of her 19 career starts including the $60,000 Super Final and the Marquis Stakes in Calgary, just as surprisingly finished second-last.

“It surprised me too,” said Hoerdt, who said he couldn’t be happier to win the race for his partner Carole Dunbar. “It was beautiful to win it for her. She’s been really dedicated to the business. She’s had some ups and downs and nobody deserves it more.”

Hoerdt said he bought Uptown Hanover, who raced against some of the best fillies in North America, on an online auction site in early in September.

“Carole and I bought her with this race in mind. I really liked the breeding and I started bidding on her.”

As fate would have it, Dunbar then called Hoerdt to say that she really liked Uptown Hanover too.

“When that happened, we really went for it,” said Hoerdt, who ended up buying Uptown Hanover for $43,000 (US). “After winning the Filly Pace, it looks like she was worth every penny. It all came together.”

As for Sunshine Boy, who was officially credited with a 16-1/2-length victory -- under a tight hold through a last quarter in a brisk 28 seconds -- it was, well, breathtaking. 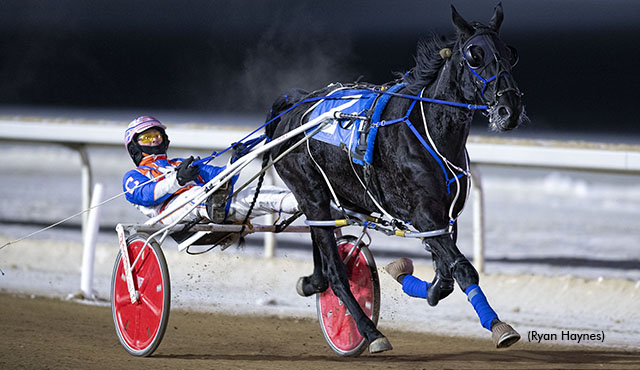 “Honestly, the way he won didn’t really surprise me,” said Campbell, who briefly sat second during the early going before quickly retaking the lead.

“I mean I didn’t think he was going to win by as much as he did but I went in with very high expectations. I didn’t want to use him that much in the first quarter. The plan was always to retake the lead if someone got ahead of him early. But, you know, I wasn’t worried. If he had clear sailing, I didn’t think he would lose,” said Campbell, who won the $74,870 Ralph Klein Stakes at Calgary’s Century Downs with him this summer.

“He started opening up on his own and then I said, 'Ok big guy, go for it' and he did the rest. As soon as I snuck out and took the lead, I wasn’t concerned at all. You can just feel it through the reins. He had so much it wasn’t even funny. Some of the other horses got tired as the season went along while he just got better and better. I think he’s hands down the best and I think he’s going to have a big career.”

As for what’s next for Sunshine Boy, whose five-race win streak includes a mile in 1:53.1, Campbell wasn’t certain.

“There’s been some talk about holding the Keith Linton in B.C. in a few weeks. That stake got wiped out last spring because of COVID when everything shut down.”

Campbell has been fielding questions about selling the colt owned by Jodi Loftus, Dana Shore and George Rogers for quite a while. But after what he showed in the Derby, the price just went up again.

“People are phoning about him but I’m not ready to let go of him yet. He still hasn’t shown everything he’s capable of doing. If I sell him now, I’m selling him at a cheaper price than what he’s worth. I was very happy with him. I’ve been training this horse since he was a weanling, which makes the win even more special.”

(With files from Curtis Stock / thehorses.com)