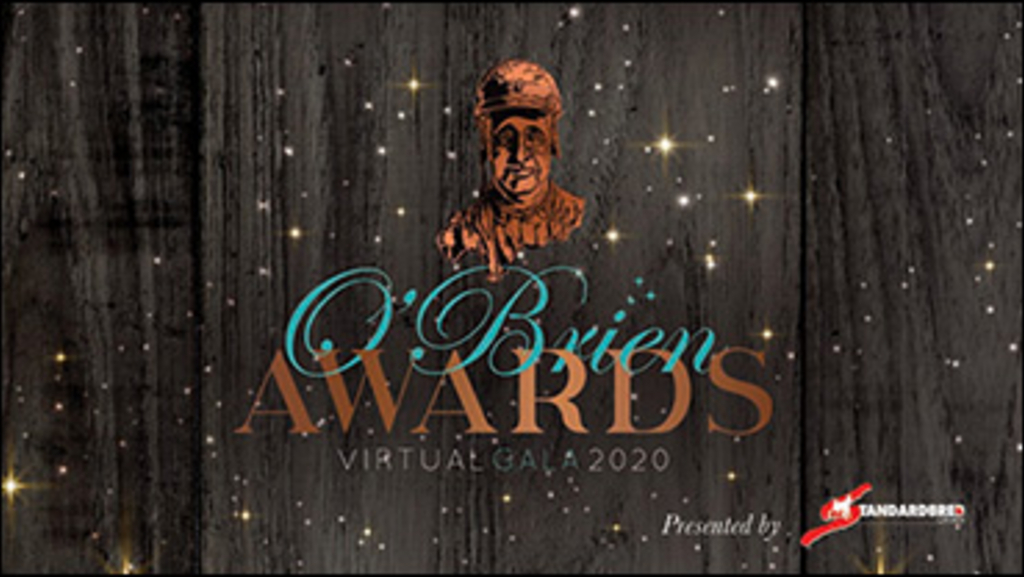 Standardbred Canada announced the winners of 2020 O’Brien Awards, which honour Canada’s best in harness racing over the past season, during a Virtual Gala videostreamed on standardbredcanada.ca on Sunday, January 31. 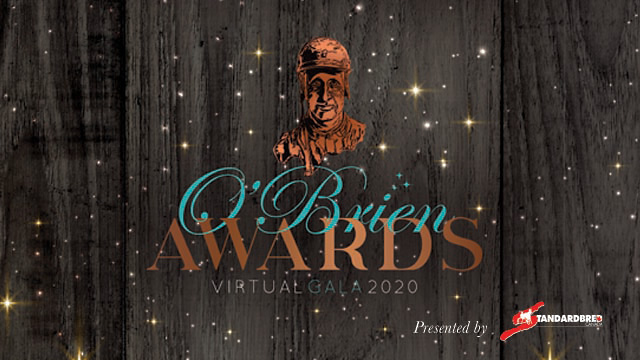 Held virtually due to the provincial lockdown in Ontario, this year marked the 32nd edition of the O’Brien Awards, named in honour of the late Joe O’Brien, an outstanding horseman and member of the Canadian Horse Racing Hall of Fame. 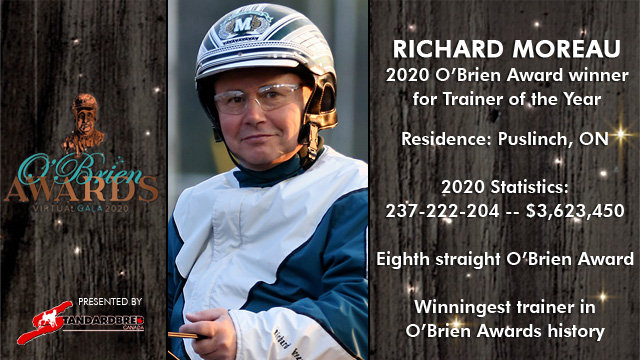 Richard Moreau added a record eighth O’Brien trophy to his mantle in the Trainer of the Year Category after a season which saw him top the earnings and win charts for Canadian trainers. Based in Puslinch, Ont., Moreau is one of the country’s busiest trainers, sending postward 1,604 starters that made 237 trips to the winner’s circle and earned more than $3.6 million in purses.

Bob McClure of Rockwood, Ont., won his first O’Brien trophy as Canada’s Driver of the Year following a career-best season for earnings. McClure was the country’s leading money winning driver and he also reached several major milestones last year -- eclipsing the $7 million mark in earnings, winning his first Breeders Crown Championship and capturing the Lampman Cup as the Ontario Sires Stakes’ leading driver. Some of the horses he regularly drove who contributed to his earnings milestone and 233 trips to the winner’s circle included divisional champions Donna Soprano, Lauras Love, Lawless Shadow and Tattoo Artist while sharing the driving duties aboard On A Streak. 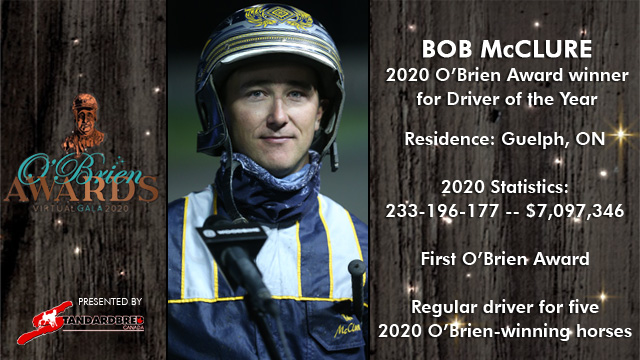 Scarlett Hanover was crowned champion in the Two-Year-Old Pacing Filly division following a stellar season which saw her post 11 top-three finishes from 14 starts and bank more than $449,000 in earnings. She won two Ontario Sires Stakes events including the OSS Super Final and also competed against Grand Circuit company, scoring a season’s best 1:51.3 victory in the Champlain Stakes while also winning an elimination of the Shes A Great Lady.

Lawless Shadow was voted Two-Year-Old Pacing Colt of the Year after an ultra-consistent season that saw him hit the board in eight of nine races, including four victories, while earning more than $307,000. He scored two victories in Ontario Sires Stakes events, a win in the Nassagaweya, runner-up finishes in his Metro elimination and OSS Super Final and a third-place finish in the Metro Final.

In the Three-Year-Old Pacing Filly division, Lauras Love took O’Brien honours. The Betterthancheddar filly was a model of consistency in 2020, scoring 16 top-three finishes, including eight victories from 20 races, and earning $331,000 for her connections. In addition to a victory in an Ontario Sires Stakes event, she scored multiple victories in overnight competition and also won a division of the Simcoe Stakes against Grand Circuit company.

Tattoo Artist was voted Canada’s Three-Year-Old Pacing Colt of the Year. The son of Hes Watching was a winner of eight of 17 starts and more than $666,000 last season with victories in five Ontario Sires Stakes events and a division of the Simcoe Stakes. One of his biggest efforts was a runner-up finish in the $1 million Pepsi North America Cup.

So Much More, a dominant competitor in the Fillies & Mares Preferred Ranks at Woodbine Mohawk Park, took Older Pacing Mare honours. She won 12 of 30 starts and eclipsed $300,000 in earnings last year while winning in a career best 1:49.3 at Mohawk.

Century Farroh took home two O’Brien Awards; one as Older Pacing Horse of the Year and the other as the Somebeachsomewhere Horse of The Year. Competing as a four-year-old, the son of Mach Three scored 12 top-three finishes in 16 starts and accrued more than $637,000 in earnings in 2020. His stakes victories included the Breeders Crown and the Dan Patch, both at Hoosier Park. 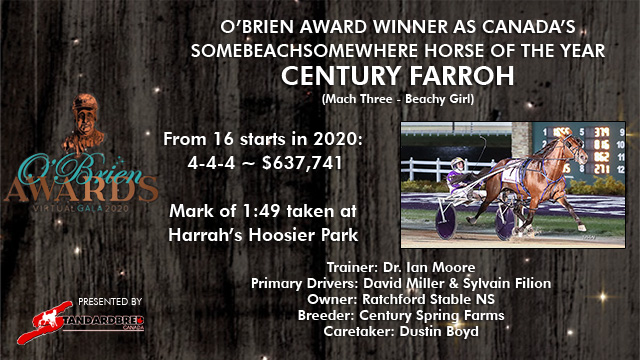 Donna Soprano was voted Two-Year-Old Trotting Filly of the year. The Donato Hanover filly won five of seven races and more than $575,000 for her connections in a season that included sweeps of the Pure Ivory and Peaceful Way Stakes, a win in a Champlain division and an impressive runner-up finish in the inaugural edition of the Mohawk Million.

In the Two-Year-Old Trotting Colt division, On A Streak beat out stablemate Macho Martini. On A Streak had only two wins in 10 starts, but they were both very lucrative ones. His maiden-breaking effort came in the $525,000 William Wellwood Stakes, which was worth $267,500 and a coveted spot in the inaugural Mohawk Million where he finished a solid third. His second victory came in the Breeders Crown, and was worth $300,000. In total the Cantab Hall colt earned in excess of $850,000 for his season which also included a runner-up finish in the Valley Victory.

Sorella took divisional honours as Canada’s Three-Year-Old Trotting Filly of the Year for a season which saw her win eight of 15 races and $737,000. The Muscle Hill filly posted victories in multiple stakes events including the Hambletonian Oaks, the Reynolds, the Casual Breeze, the Bluegrass and the Matron.

Pemberton, a son of Wheeling N Dealin, was voted Canada’s Three-Year-Old Trotting Colt of the Year. A winner of eight of 10 races, he earned more than $363,000 during his sophomore season. Four of his victories came in Ontario Sires Stakes events including the season-ending Super Final.

In the Older Trotting Mare category, Hey Livvy won O’Brien honours for her season which included nine wins and more than $283,000 in 23 trips postward, highlighted by her richest payday, an impressive victory in the Armbro Flight.

Perfetto was voted Older Trotting Horse of the Year after winning seven of 25 races and more than $151,000 while making all but one start at Woodbine Mohawk Park. The son of Majestic Son posted a career best effort of 1:52.3 on December 14 at Mohawk.

Austin Sorrie of Freelton, Ont., was recognized with the Future Star Award. The Prince Edward Island native was in demand on the Ontario B Track circuit in 2020, driving in more than 1,200 races, scoring 151 wins and driving horses to more than $923,000 in purse earnings.

SOMEBEACHSOMEWHERE HORSE OF THE YEAR